What is ARBA‘IN? A book by MGA and his team of writers

Intro
MGA and his team created an idea for a 40-pamphlet series in 1900, eventually, the book only contained 4. The full name of this book series/pamphlet series was “Arba‘in” (Li Itmamil-Hujjati ‘Alal-Mukhalifin), in english as “The Forty” (Divine Arguments Against All Opponents) (see pages 291-293). MGA and his team claimed that they would write 40 of these pamphlets. However, MGA and his team stopped and 4 and argued that 4=40. 8 years later, when BA5 was published posthumously, Ahmadi editors (claiming to be MGA) wrote that 5=50. Hence, we have tracked this logic to MGA’s ghost writers and proved that MGA never wrote anything, his ghost writers and fanatical Ahmadi’s worked day and night to make sure that MGA was exonerated for his failures. For example, Mirza Yucub Baig made sure that Lekh Ram died when the man landed on his emergency table desk after being stabbed. In 1910, he snatched-up the sons of Batalvi and forcibly brought them to Qadian, simply to fulfill a prophecy of MGA, the kids were eventually rescued and freed. Furthermore, in 1897, MGA sent Abdul Hameed to murder Dr. Clarke, since fanatical Ahmadi’s feared that this particular prophecy would go as unfulfilled.  Noorudin even defended the failure of the Muhammadi Begum prophecy in late 1908, as he tried to explain it away (Review of Religions, Vol. VII, no. 726, June and July, 1908, p. 279 (cited from Qadiani Mazhab). It should also be noted that during the writing of this book, per Mirza Basheer-uddin Mahmud Ahmad, MGA was in transition from non-prophet to prophet, in fact, in this book, MGA clearly calls himself a prophet of God for the first time ever.

Some quotes
“””Today, in order to satisfy all seekers of knowledge, I invite all my opponents, non-believers that I propose to publish forty flyers (Footnote-22).  So on the day of Judgment, I can present to God Almighty that I have fulfilled my mandate. So now, with all due respect and humility, I address all Muslim clergy, Christian clergy, Hindu clergy and Pundits and Aryans to whom I send this flyer and inform them that I have been sent to this world in order to uplift morality, and reform beliefs and remove weaknesses of faith. My step is in the footstep of Jesus, peace be upon him, and it is why I am called the Promised Messiah.  And I have been commanded that I spread the word of God and of truth by manifesting heavenly signs and teaching piety. I am against raising the sword for the purpose of spread of religion and to cause bloodshed in the name of religion. I am a Prophet of God and I try to remove all mistakes and weaknesses.”””((Ruhani Khaza’in, volume 17, page 343)) (also see Hidden Treasures).

“””””I am called the Promised Messiah. I am commanded to spread the truth in the world only through pure teachings and extraordinary signs. I am against the use of the sword for the sake of religion. I am commissioned to remove, as much as I can, all wrong notions from
among the Muslims and to invite them to the ways of pure morals, forbearance, meekness, fairness and truthfulness. I declare unto all Muslims, Christians, Hindus and Aryas that I have no enemy in the world. I love mankind as does a mother, even more than that. I am an enemy only to such false beliefs which destroy the truth. Sympathy for man is my duty and hatred of falsehood, idol worship, transgression and every kind of wickedness, injustice and evil behaviour is my principle. The real reason for the effulgence of my sympathy is the fact that I have discovered a mine of gold and Jewels and it is a good fortune that I have found in this mine, a priceless diamond full of lustre. The price of that diamond is so great that if I were to distribute it amongst all my brethren of mankind each one of them would become richer than the one who possesses in the world today notwithstanding the greatest quantity of gold and silver.

What is that diamond? The True God. To get to Him is to recognize Him, to have a true faith in Him, to seek Him it would be the height of injustice that after possessing so much wealth I should keep mankind deprived of it, that I should enjoy it while they should starve. It is absolutely impossible for me to do so. My soul is sore vexed when I see their poverty and starvation and my heart sinks when I find them in darkness. I want to fill them with heavenly
wealth, and I wish them to get as many jewels of truth as humanly possible….

“”Naturally, the prophecies of the Holy Quran and Hadith, in which it was revealed that the Promised Messiah will be prosecuted by the Muslim scholars must come to pass. They will declare him an unbeliever, will give a fatwa of his Kufr against him, and will insult him, and will declare him out of the fold of Islam and it’s destroyer”.

“”””As Allah the Almighty knew that my opponents would wish for my early demise so that they might be able to proclaim that I had died early because I was false in my claims, He revealed to me aforetime:

That is [Arabic] Your age will be eighty years—a few years less or some years more; and you will live long enough to witness your distant progeny.

Thirty-five years or so have passed since this revelation was vouchsafed.”””

“””””His revelation God has also called me the Baitullah [House of Allah], which indicates that the more my opponents strive to demolish this House, the more treasures of divine knowledge and heavenly Signs will emerge from it. Accordingly, my experience is that with every
persecution a new treasure is disclosed. One of the revelations in this context is:

[Persian] Someone kissed my foot and I told him: ‘I am the Black Stone.’

“In the books of hadith – Sahih Bukhari, Sahih Muslim Sharif, Dani-Ail’s – and in the Holy Bible, where ever there is a description of me, the word “prophet” is written by my name.”

“it was in hadees that a star will emerge at time of maseeh maoud”,

“hajj will be stopped” and “plague will come ” at time of maseeh .

In Arabieen 1920 old edition, page 23. A word qatihi mohar (seal) is used in a sentense that means a final ” confirmation”. 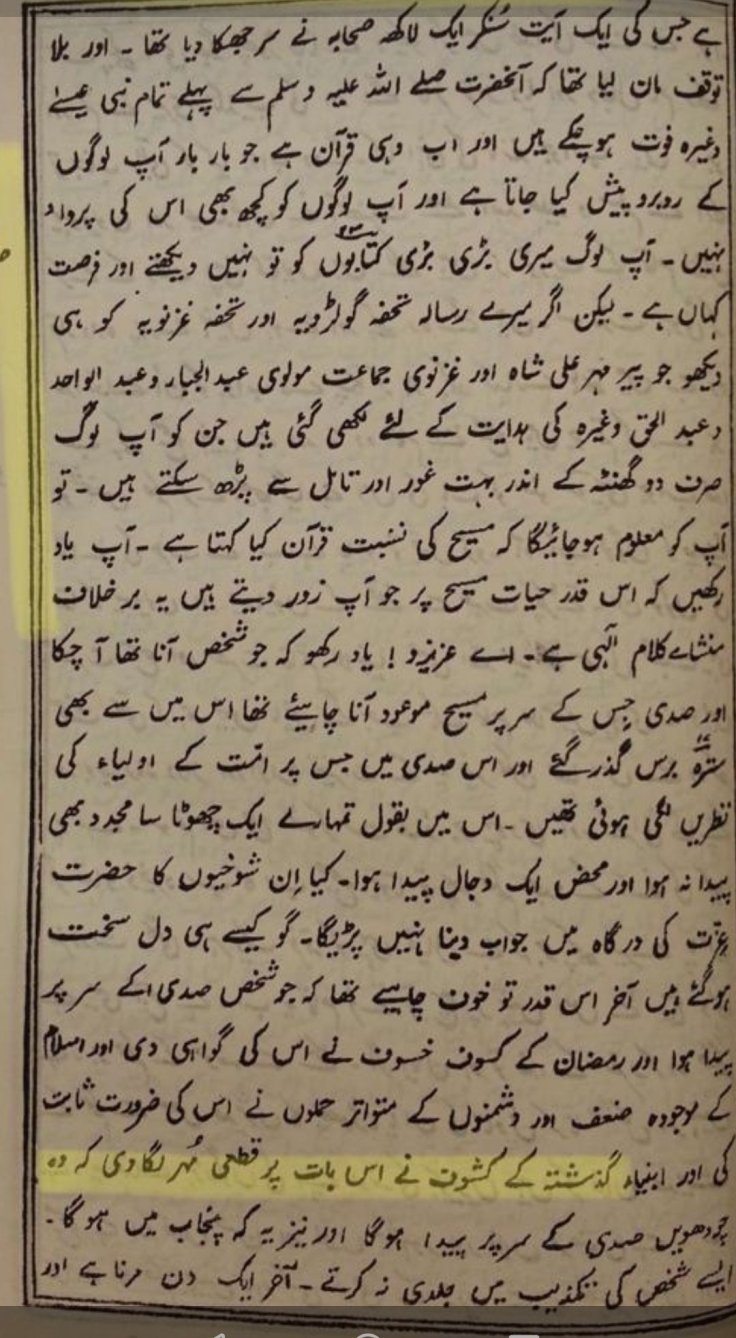 40 thoughts on “What is ARBA‘IN? A book by MGA and his team of writers”