“”Itmamul-Hujjah”” in english as “”The Final Argument”” by Mirza Ghulam Ahmad 1894, quotes and background data

Intro
This book was published by MGA and his in 1894, as an Urdu/Arabic book, it was published from the Gulzar Muhammadi Press, Lahore.  In 1894, an Islamic Imam of Amritsar, Maulavi Rosol Baba, wrote a book entitled Hayatul-Masih, in which he contended that Jesus Christ is
alive and sitting in heaven. This imam was among those nine bad Maulavis who had been mentioned in another book, Anjam-e-Atham (End of Atham). This Maulavi issued a challenge to MGA in this pamphlet to demolish his arguments about the fact that Jesus Christ is alive. (see Hidden Treasures). Per Ahmadiyya sources, Maulavi Rusul Baba died on December 8, 1902, as a victim of plague in Amritsar.

” what is jesus e.s .he is just an obedient person .If God wants he can within no time can make billions like him , in fact better than him (jesus e.s) ………….Maseeh was just a normal prophet .However he was one of billions of near ones (of God) .He was from the Normal group.Just a normal (person) not a special one and not more than that …….He came for the specific nation.Alas , he could not benefit any one spiritually .His prophet hood left an example that his loss was more than his benefit , and his coming has caused to increase (bad) fate and curse .’ 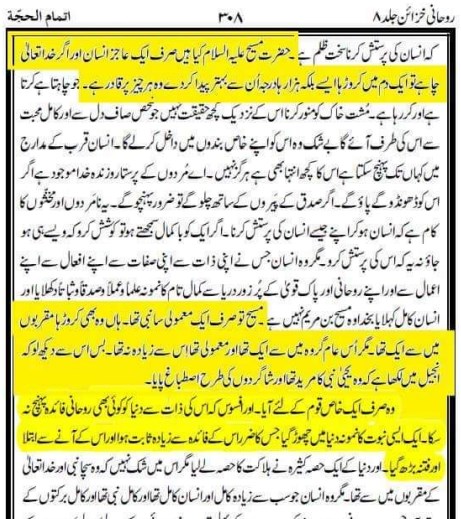