An old Ahmadiyya related website with lots of archived data

Intro
We are sure that Ahmadiyya trolls and other Ahmadiyya INC employees will get this website removed shortly. We have thus copied and pasted all of its data on this very blog. This blog/website seems to have created by some Ahmadi’s, most likely a relative of Chaudhry Maula Bakhsh Sahib Bhatti Sialkoti, who was a close companion of MGA.

This website is a dedication to Major Dr. M. Shah Nawaz Khan (1899–1977), who is the son of Chaudhry Maula Bakhsh Sahib Bhatti Sialkoti.

This page is about, https://shahnawazkhan.weebly.com/father.html

Notes from the diary of Ch. Maula Bakhsh sahib (RA) regarding
his Bai’at at the hands of the Promised Messiah (AS) 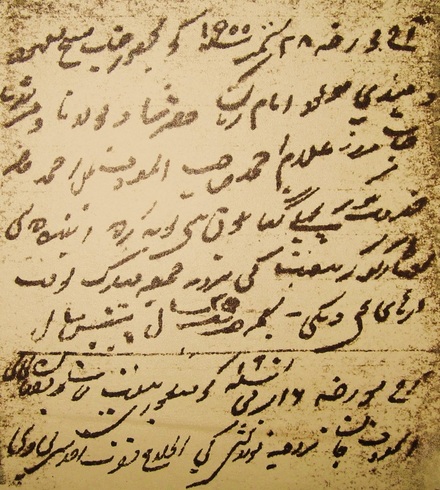 Ch. Maula Bakhsh sahib was born in 1865. He did his bai’at on September 28, 1900 and
died on November 2, 1916. He was a sincere, courageous and a passionate preacher.
He made a plaque for the Minarat-ul-Masih for huge sums of money.
He published two books: 1. Efham-ul-Khaseem ma’a Ikhtibar-e-Ibrahim, 2. Ahmad Rasool.
Dr. Mohammad Shah Nawaz Khan sahib(Retired Major and Medical Missionary to Sierra Leone) was his son. 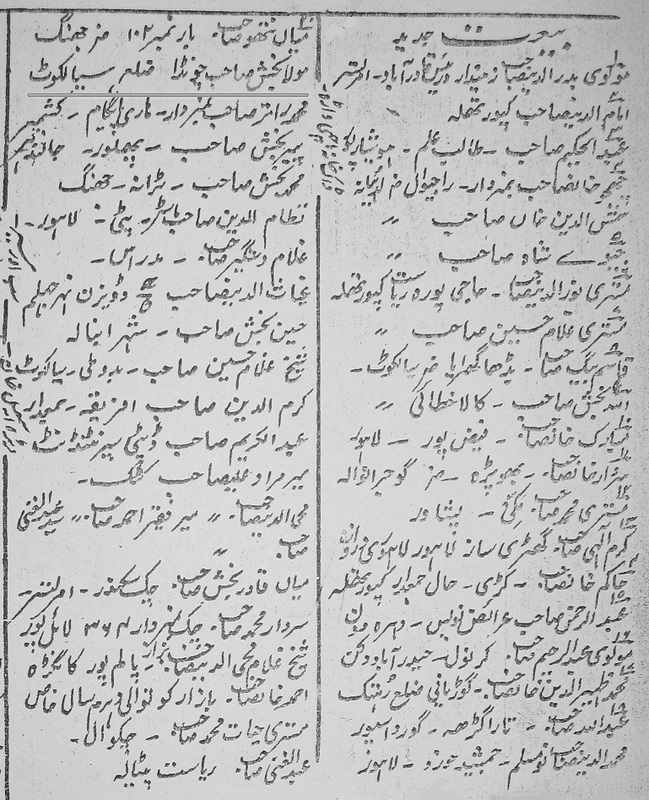 Ch. Maula Bakhsh sahib standing behind
the Promised Messiah (AS)
(The Group Photo was probably taken around the time of Maulvi Abdul Karim sahib Sialkoti’s demise in October 1905) 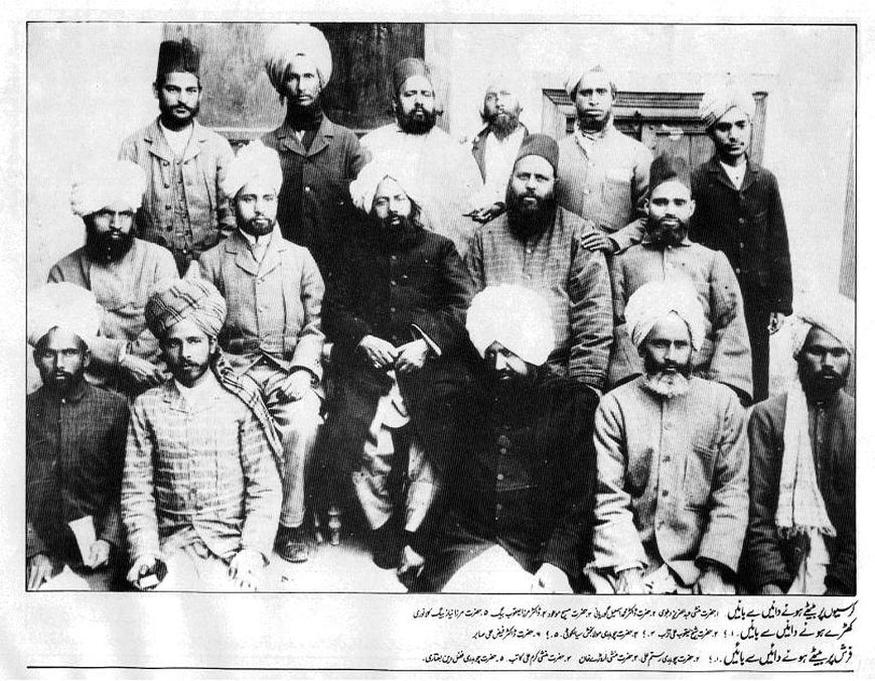 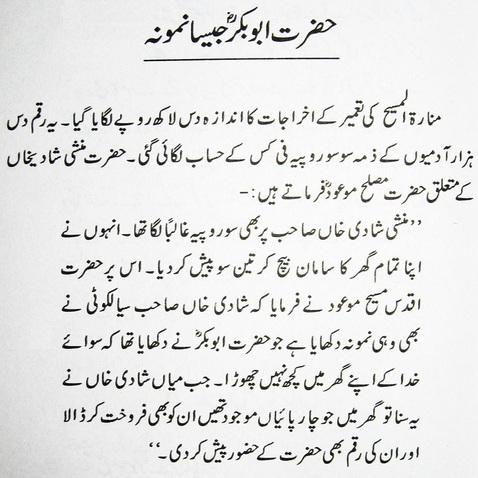 Ch. Maula Bakhsh Sahib was the lead for security clearance
from the train to the carriage outside the Jhelum railway station.
The Ahmadis and the police created a way through the crowd when
the Promised Messiah (AS) reached Jhelum by train at 2 pm on Jan 16, 1903
for his court appearance in a false case.
The Promised Messiah (AS) was accompanied by
Sahibzada Abdul Latif Shaheed (RA) (The Martyr of Kabul) and
Chaudhry Muhammad Ahsan Sahib (RA).
Narrated by Hadhrat Mian Abdur Razzaq sahib Sialkoti (RA).
Register Riwayat Suhaba, Vol 10, Page 136 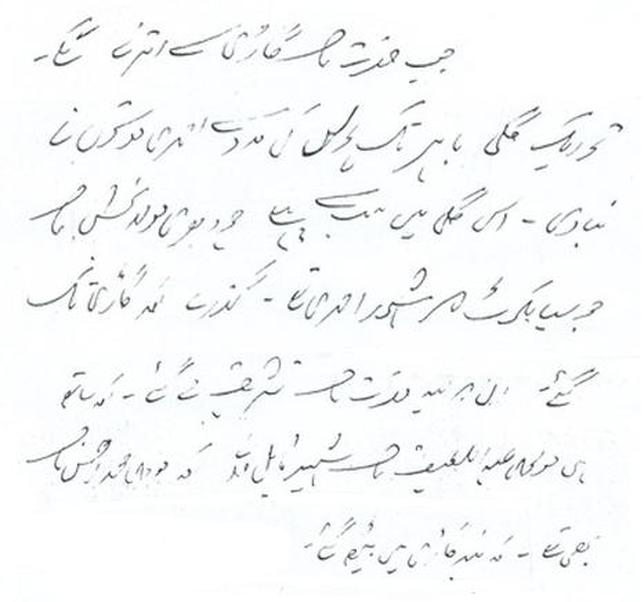 The Promised Messiah’s letter to Ch. Maula Bakhsh
Asking him to find and send two servants,
one for household chores and the other for various other errands
Dated: May 30, 1903
(Courtesy of Professor Naseera Shahnawaz) 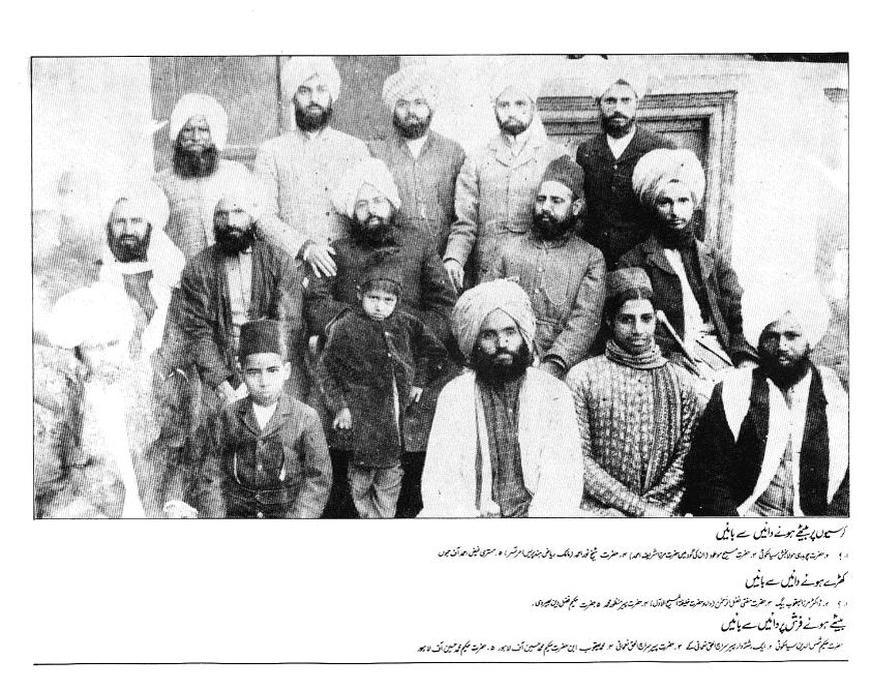 The Promised Messiah (AS) wrote a lecture titled “ISLAM”
It was read in a grand gathering on November 2, 1904 at Sialkot

The Blessed Gift from the Promised Messiah (AS)
A note from the diary of Ch. Maula Bakhsh sahib (RA) 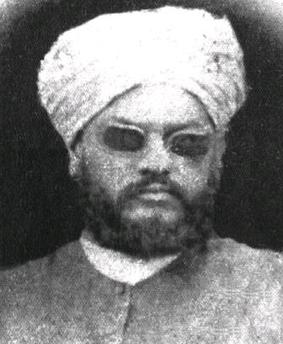 Below is a note from the diary of Ch. Maula Bakhsh sahib on the demise and burial of Hadhrat Maulvi Abdul Karim Sialkoti sahib(RA) 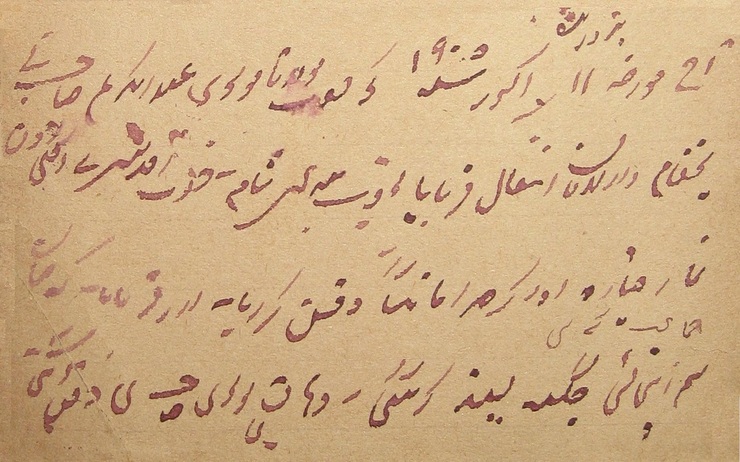 A letter of Ch. Maula Bakhsh sahib inquiring about the
“QASR  PRAYER” from the Promised Messiah (AS)
Dated: January 13, 1906
(Courtesy of Professor Naseera Shahnawaz)

The two photographs above show the original format of the letter by Chaudhry Maula Bakhsh sahib and
The Promised Messiah’s (AS) response.

A Letter by The Promised Messiah (AS)
with his Dream and Revelations of April 20, 1907
(Courtesy of Professor Naseera Shahnawaz) 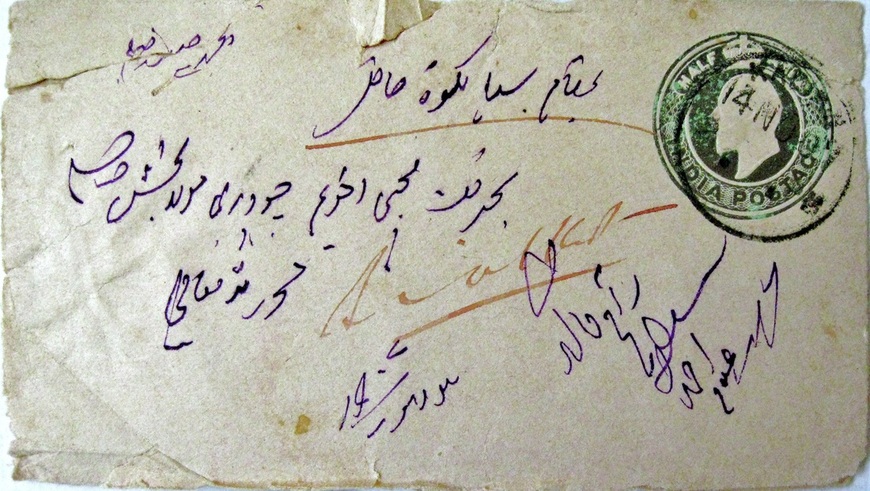 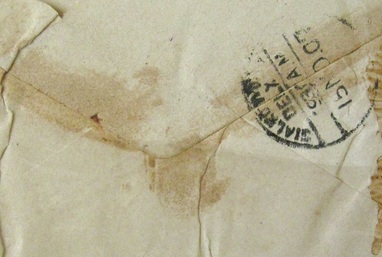 The Holy Letter inside the Holy Envelope
(1). An urgent need of Rs.100 for “LANGAR KHANA”
(2). The Promised Messiah’s wish that if a sufficient amount could come from Sialkot on a monthly basis, the huge responsibility of “LANGAR KHANA” will be shouldered
Dated: November 13, 1907 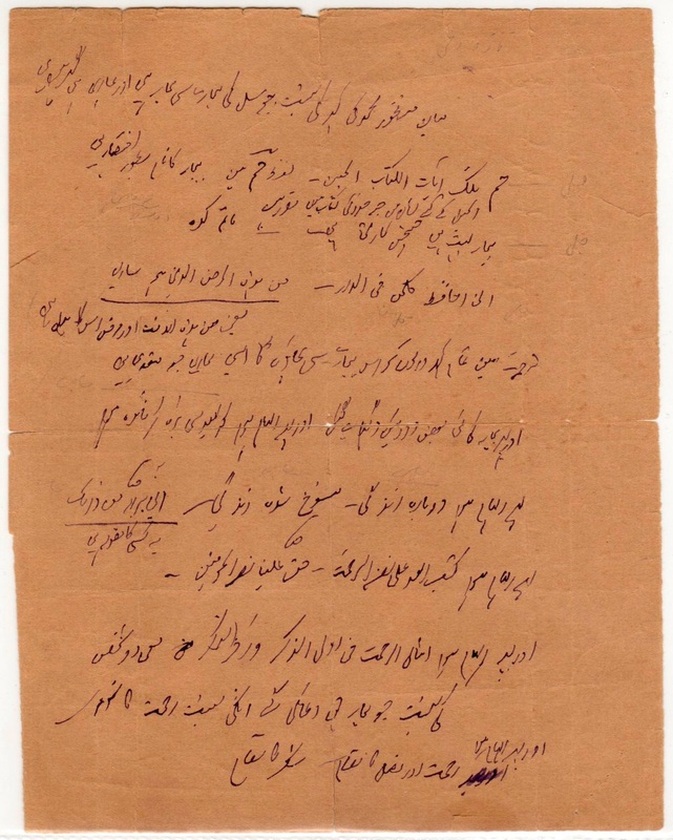 Historic correction for the future editions of Tadhkira

The discovery of the above page after 102 years, with his revelations of April 1908,
handwritten by the Promised Messiah (AS) himself,
two corrections can be made to the future editions of Tadhkira.
(1). Bimaar bohat hi cheekhain maarti hey instead of Bimaar bohat hi cheekhain maarta hey.
(2). Rehmat aur Fazl ka makaam – Shukr ka makaam instead of Rehmat aur Fazl ka kalaam – Shukr ka kalaam.
Hadhrat Khalifatul Masih V (ABA) has been informed about the unearthing of this historical treasure
on Friday, December 31, 2010

Ch. Maula Bakhsh sahib’s letter of Nov. 15, 1908 to the editor of Al-Badr,
Hadhrat Mufti Muhammad Sadiq sahib (RA)
informing him about his new appointment and his inability to attend the Jalsa Salana
due to the extra workload in the month of December.
He intends to send an amount equal to his travel and other expences between Qadian and Sialkot so that it becomes an incentive for others to follow who may be in similar situations like his.
Published in Al-Badr Nov. 19, 1908, No. 2, Vol. 8, Page 2, Column 1 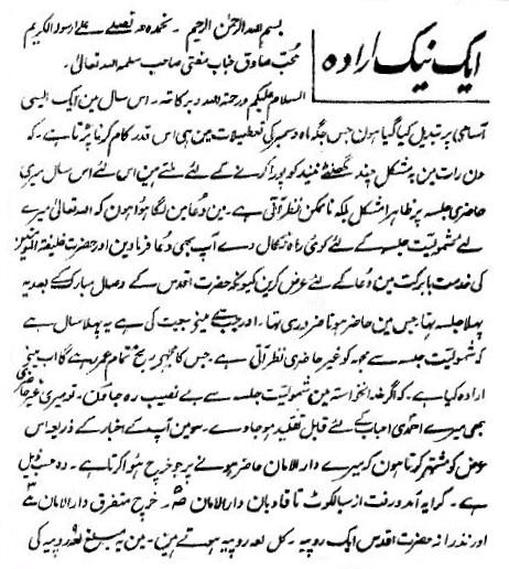 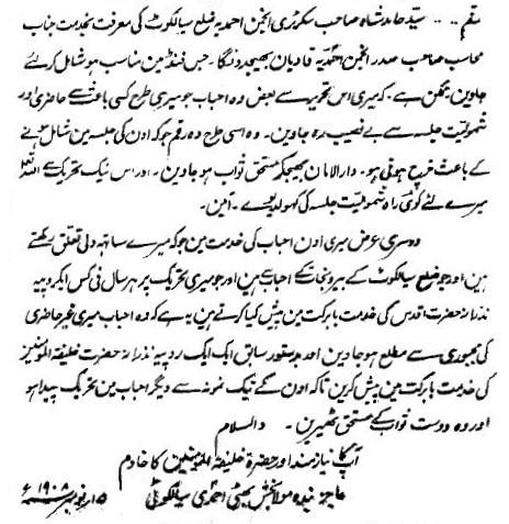 Ch. Maula Bakhsh’s letter regarding his inability to attend
the Jalsa Salana of Dec. 1908
despite his intentions and prior assurances to his friends
Published in Al-Hakam Dec. 18, 1908, No. 20, Vol. 12, Page 3, Column 1 & 2
(Courtesy of Maulana Ghulam Misbah Baloch sahib)

The editor of Al-Hakam, Hadhrat Sheikh Yaqoob Ali Turaab sahib (RA) under the title
“The Problem of Apostasy and the obligation of Muslim Rajputs” wrote that
“Ch. Maula Bakhsh Bhatti is the first Ahmadi Rajput voice raised in response to the appeal
for rectifying the situation. He is passionate and sincere and wholeheartedly devoted
to the cause of uplifting Rajputs from their decadence.
He has also written a very poignant poem “Dard Nama” on the sad state of their affairs.”
Al-Hakam Jan. 21, 1910, No. 2, Vol. 14, Page 6, Column 3.

Detailed Minutes of the Meeting of the Association of Ahmadi Rajputs held at the vast ground of Jalsa Salana Qadian on March 25, 1910 from 8 pm till 11 pm

An association is created for tabligh to the Rajputs
Published in Al-hakam, April 14/28, 1910, page 7

Association of Indian Muslim Rajputs
was established on March 27, 1910 for the propagation of Islam among the Rajputs. Its president was Ch. Ghulam Ahmad Kathgari and
Ch. Maula Bakhsh sahib Bhatti Sialkoti was its secretary. 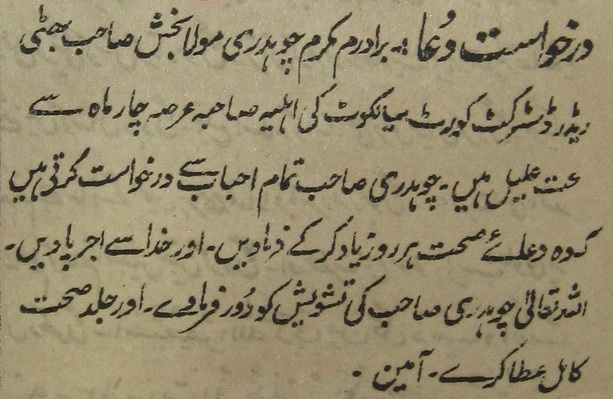 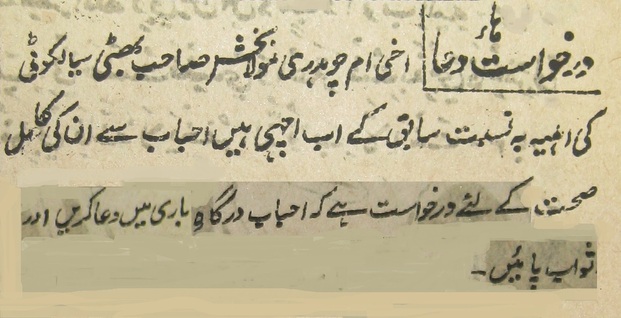 The book “AHMAD Rasool“,
inferred, collated and compiled from the Ahmadiyya literature and published by
Ch. Maula Bakhsh sahib in January 1916, to be freely distributed among
the persons belonging to the Lahore Ahmadiyya Movement
(Those who do not believe the Promised Messiah to be a Prophet and an institution of Khilafat after him) 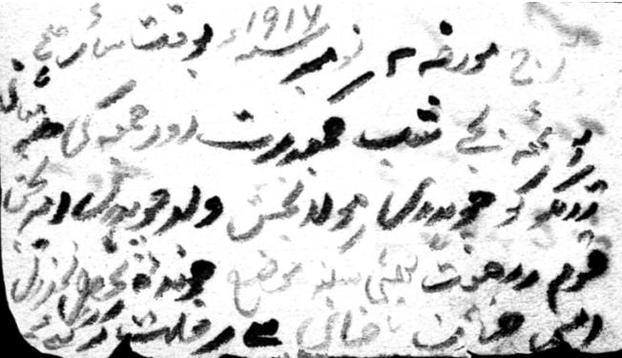 He saw in that dream that he has come again to this world after many centuries and took over the command of an Ahmadi army from some other 6 or 7 generals on horseback as they have been lead astray of the path of truth on which he had put the Jamaat firmly. On his way to Sialkot, he met Ch. Maula Bakhsh sahib as an officer in the army and asked him to bring his forces to join his ranks,
which Ch. sahib very happily did.

One of the Most Important Documents
in the History of Ahmadiyyat

This is a scanned image of the photograph of the letter written on February 23, 1904
by Ch. Maula Bakhsh sahib to inquire from the Promised Messiah (AS) about the issue of offering the jinaza prayer of a non‐Ahmadi Muslim.
Hadhrat Musleh Maud (RA) was in search of this letter since 1917. It was just due to the Divine Will and miraculous coincidence that during the preparation for the Munir Inquiry Commission on the 1953 disturbances against Jamaat‐e-Ahmadiyya,
Dr. Shah Nawaz Khan found this letter in his father’s documents.
On the instructions of Hadhrat Musleh Maud (RA), he submitted the original letter after copying its contents to Hadhrat Mirza Bashir Ahmad sahib M.A. (RA) to be permanently preserved in the archives of Ahmadiyyat.
(This scanned image was retrieved by Dr. Farid Ahmad from The Khilafat Library, Rabwah in 2005) 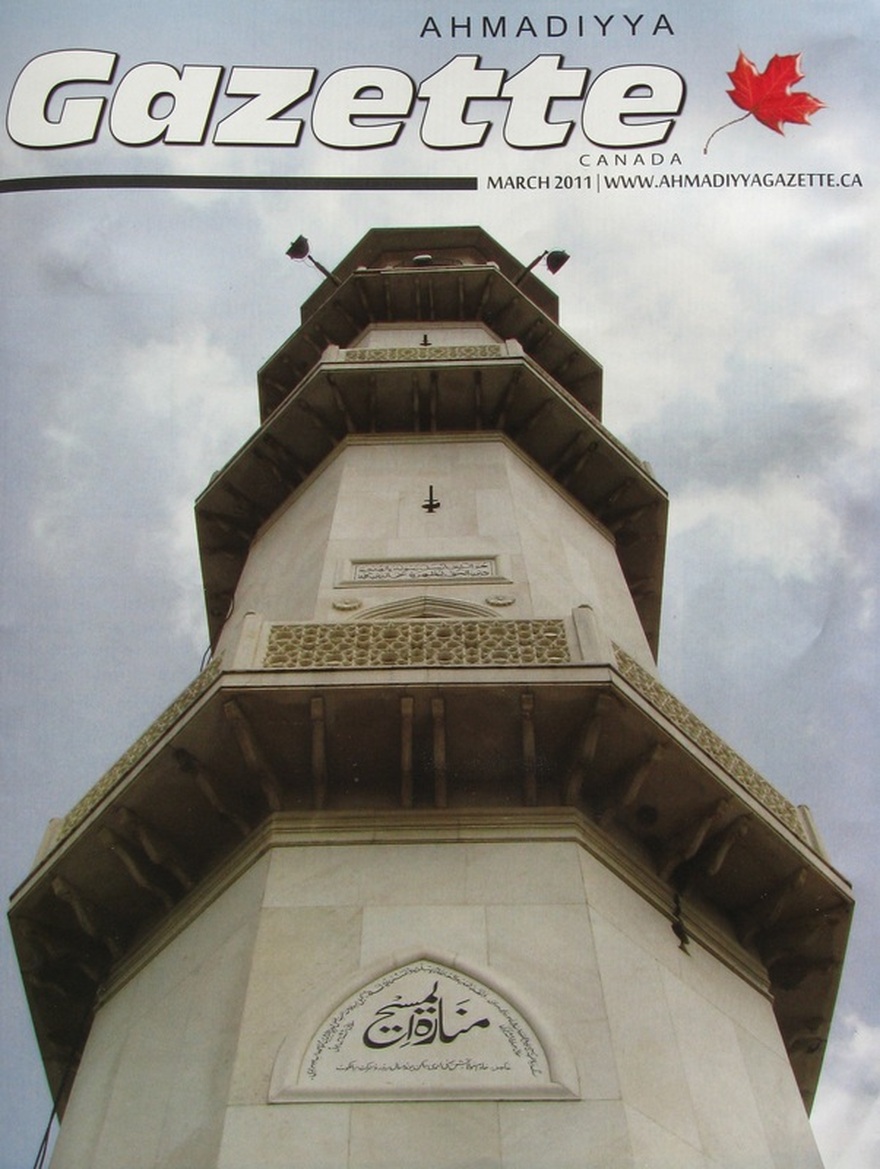 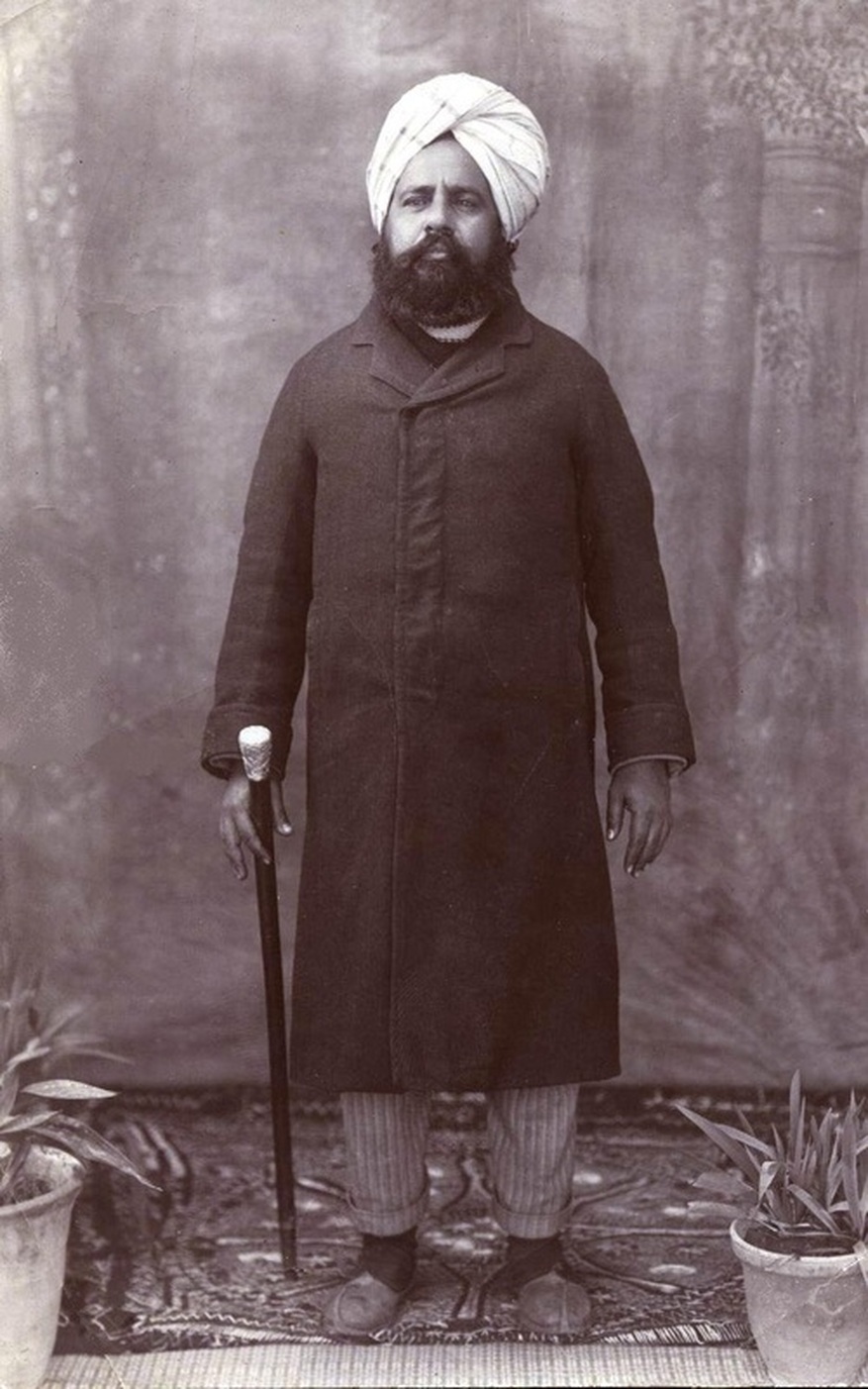