Initially, in 1891, Mirza Ghulam Ahmad dismissed Earthquakes altogether, however, after the Kangra earthquake of 1905, MGA changed

Intro
In 1891, as MGA claimed to be the Messiah, he was also claiming that the miracles and prophecies of Jesus were in no way extraordinary, this included earthquakes, deaths, wars and famines (See Izala Auham, RK-3, pages 106-107). Thus, MGA totally denied that these were religious phenomenon. 12 years later in 1903, via MGA’s revelations published in the Badr and Hakam, MGA continued to give the impression that earthquakes weren’t important to him or any type of divine phenomenon. However, after the Kangra earthquake April 4th, 1905 (which was about 100-200 KM from Qadian), MGA and his team of writers totally changed up. They even went to MGA’s writings from 1879-1884 (Via the Barahin) and claimed that MGA had predicted the Kangra earthquake back in 1879-1884, which is ridiculous. However, this was their normal process of argumentation. They did the same with the prophethood of MGA. All the references are posted in the below.

After MGA died, the Barahin-i-Ahmadiyya Vol. 5 was published and Noorudin defended MGA’s contradiction in a silly way (See the ref in the below). In 1935, 18 Ahmadi’s died in Quetta as a result of this earthquake (See ROR of April 1935, page 273). In 1935, there were barely 174 Ahmadi’s in Quetta, this men, women in children, they also seem to have had a mosque. This is the beginnings of the Ahmadiyya jamaat in Quetta. 2 or 3 Ahmadi’s also died in the famous Bihar earthquake of 1934.

“”And when the Lord manifested himself to the mountain, he crushed it down”.  (May-1905 ROR)

Another ref:
Barahin-i-Ahmadiyya Vol. 4, page 435 of the online english edition 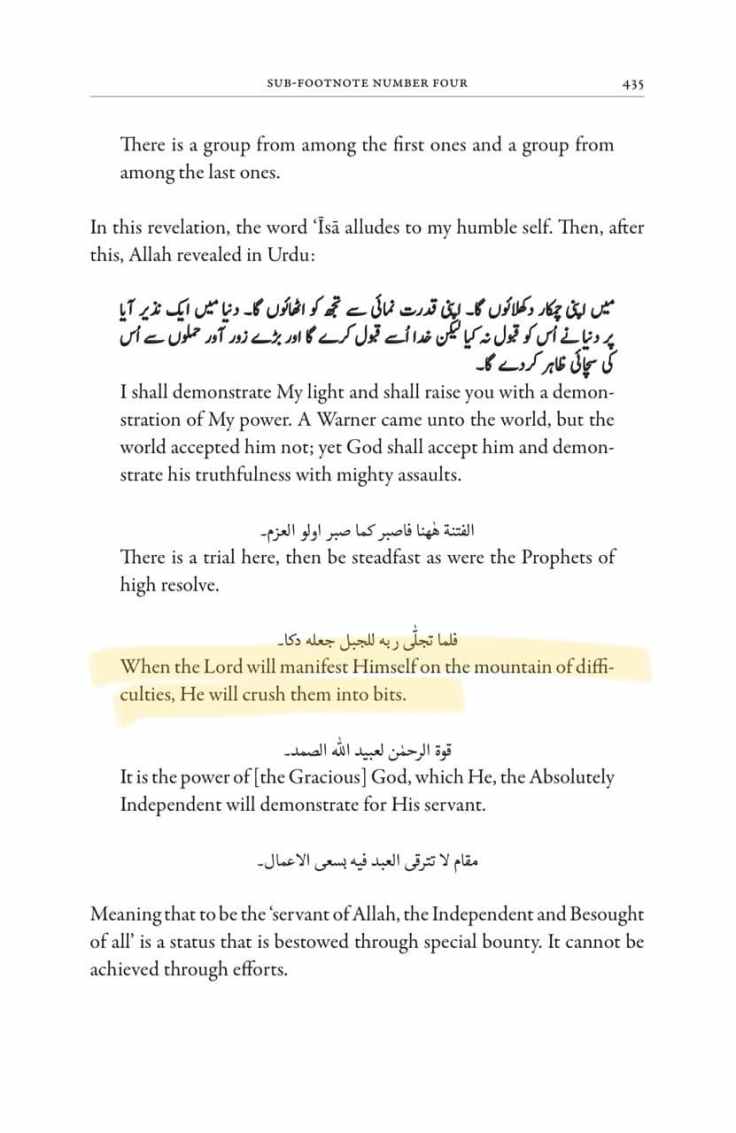 “””The miracles and prophecies of Jesus were in no way extraordinary

As for the miracles shown by the first Messiah, which are demanded to establish resemblance, I have already explained that bringing the actual dead to life has no significance. I have come to raise the spiritually dead to life and this shall certainly take place. Moreover, if the actual work done by Jesus is reviewed, leaving aside the additional descriptions which have been added as fabrication or out of misunderstanding, we do not find anything out of the ordinary there. On the contrary, I do not think that the amount of objections and doubts that arise regarding the miracles and prophecies of Jesus are to be found in case of the miracles and prophecies of any other prophet. Does not the “healing pool”[John, ch. 5, v. 4] remove the glory from the miracles of Jesus? And his prophecies are in an even more decrepit state. Are these worthwhile prophecies, that there will be earthquakes, deaths, wars and famines? And an even more regrettable fact is that the number of the prophecies of Jesus that went wrong is more than the number that was fulfilled. He gave Judas Iscariot one throne out of the twelve thrones of Heaven, which he was eventually deprived of. Peter was given not only a throne but also the keys of Heaven and the authority to open or close its gates to anyone. But when Peter last took leave of Jesus, he cursed him to his face and swore that he did not know him!

The point behind all this is that the prophecies of Jesus went wrong more than those of others, but the error does not lie with the Divine revelation itself; rather, it is an error of understanding and interpretation as they were human, and the view of a human may be both right or wrong. So these mistakes were made while applying human judgment.”””” 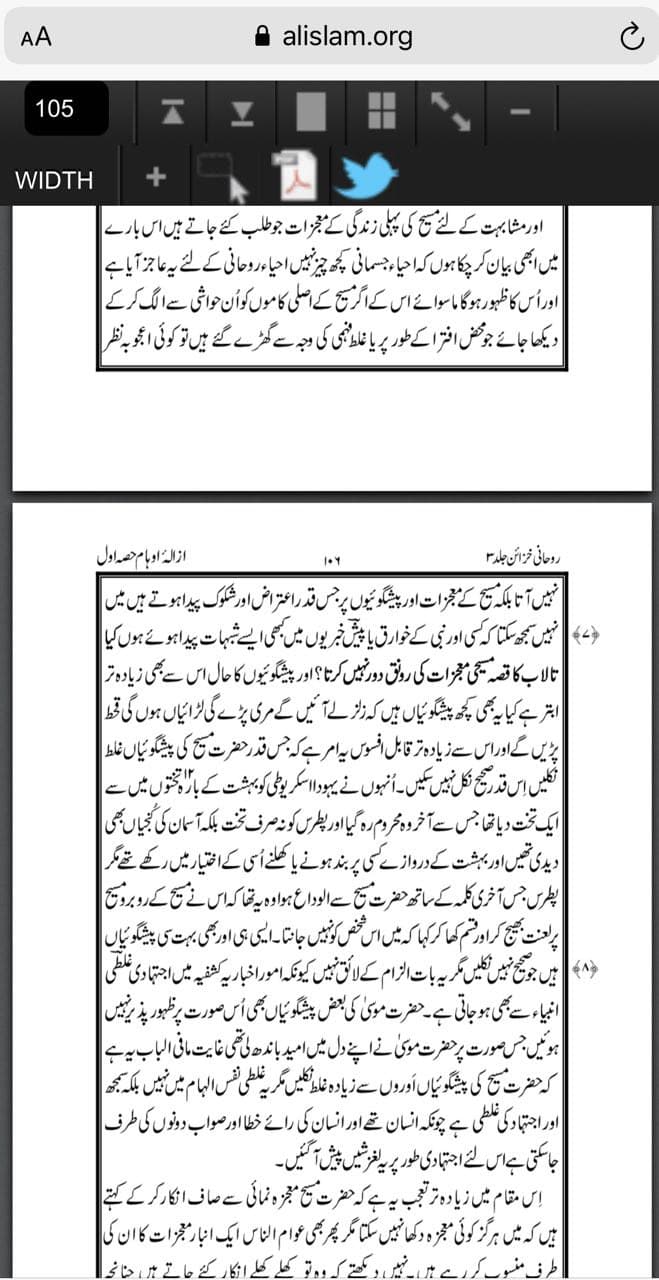 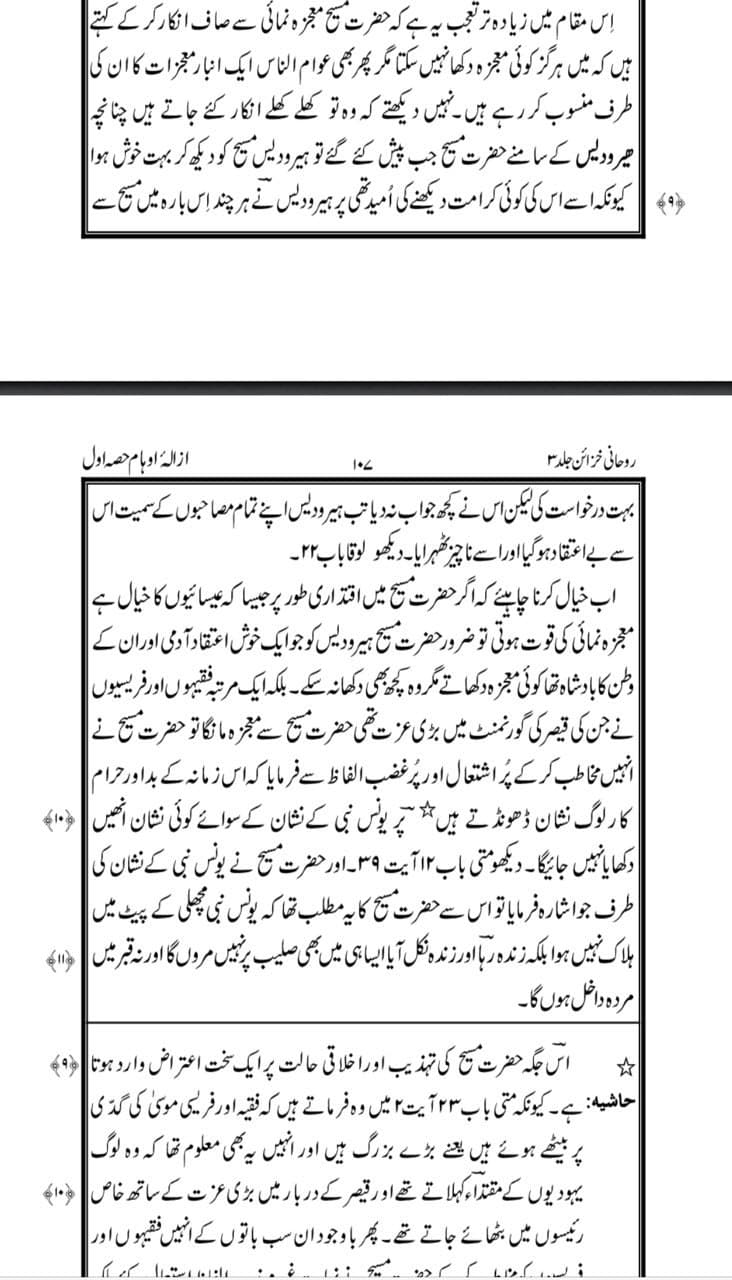 “”January 22, 1903
The Promised Messiah said: Last night I saw that a severe earthquake had come but it did not cause any damage to any building etc.”” 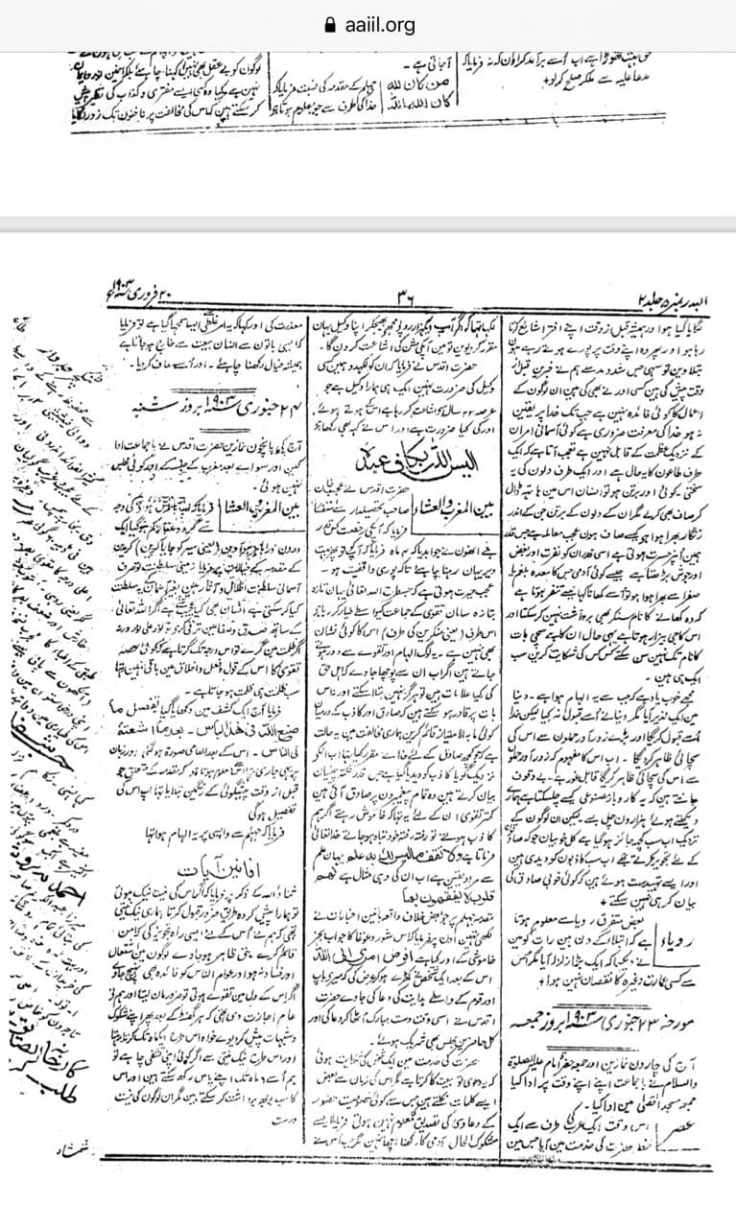 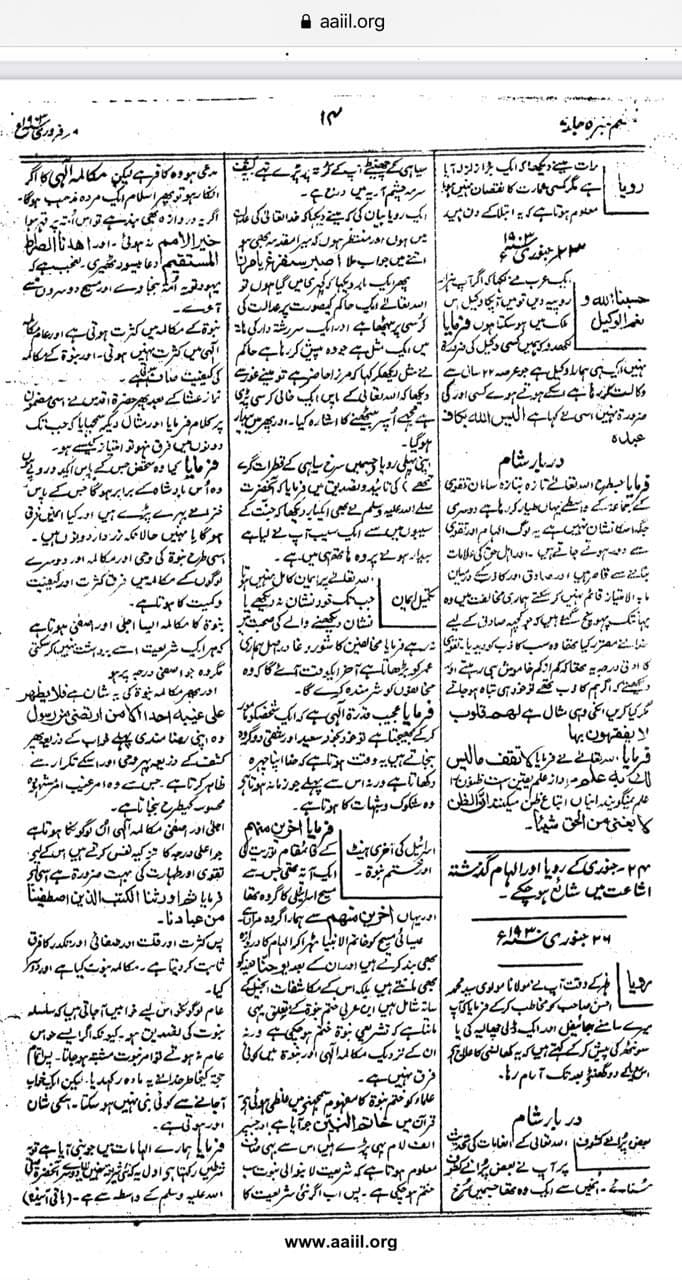 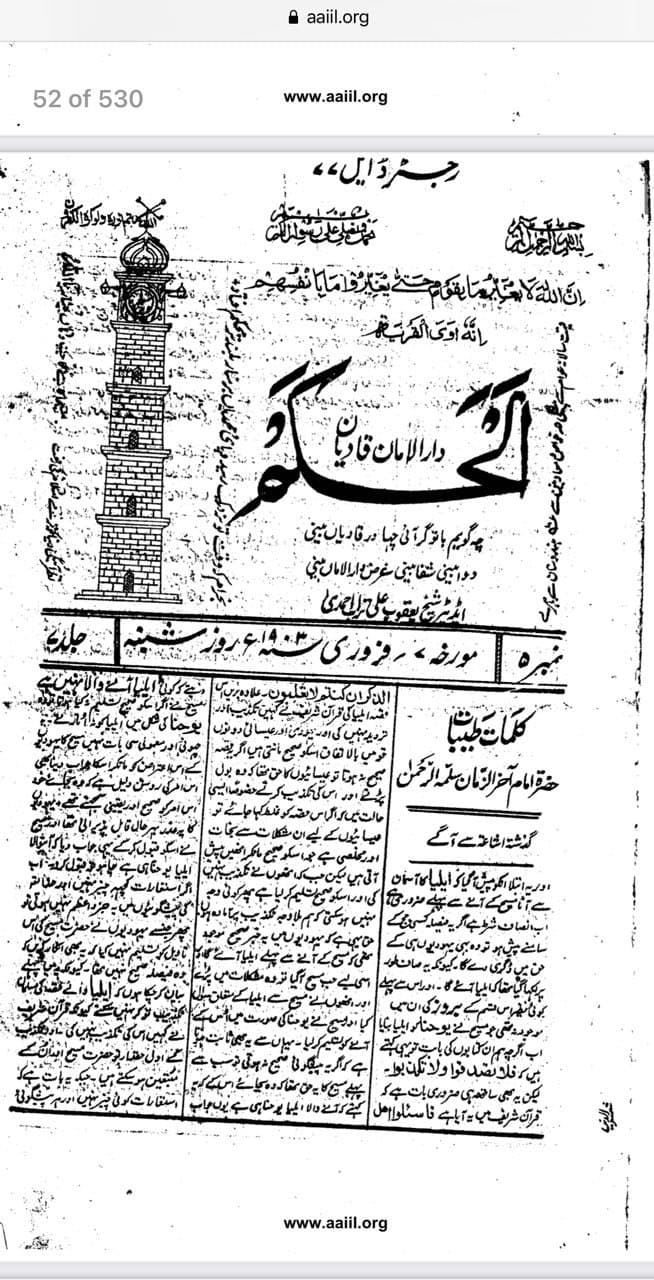 “””I saw in my dream that someone said: A shock of earthquake, but I did not perceive any earthquake. Neither the wall nor the house was shaking. Thereafter the revelation came:

[Arabic] Allah will cause no damage. Allah is with those who are righteous and who do their duty to the utmost. You will see help from Allah and they will continue to flounder. [Publishers]

The Notebook of the Revelations of MGA, page 21, has the words instead of . [Abdul Latif
Bahawalpuri].

Mirza said: “I came to the garden when the earthquake struck to pray here, and now I will stay here to know more about what God has told me, is it near or far. If I knew that it is far, I will come back in a month.?”

How many days did Mirza stay in the tent terrified of the earthquake and plague after his shaitan promised him protection?

An earthquake occurred on April 4, 1905, so Mirza left his house in a panic and stayed in a tent.

After 35 days of staying in the tent, he said: I came to the garden when the earthquake struck to pray here, and now I will stay here to know more about what God has told me, whether it is near or far. If I know that he is far away, I will come back in a month.? (malfozat, 10/5/1905).

Mirza is talking here about that he will stay for another month.. If he was true to his promise, his stay in the tent will be 65 days.

People lived at that time in safety, and one of the sheikhs mentioned that God had inspired him that no earthquake would occur. As for Mirza, he lived in panic for this whole period! Despite the inspiration of his shaitan!!

And so is Corona today, as it filled the hearts of ahmadies with terror, despite the revelations of their shayateen. 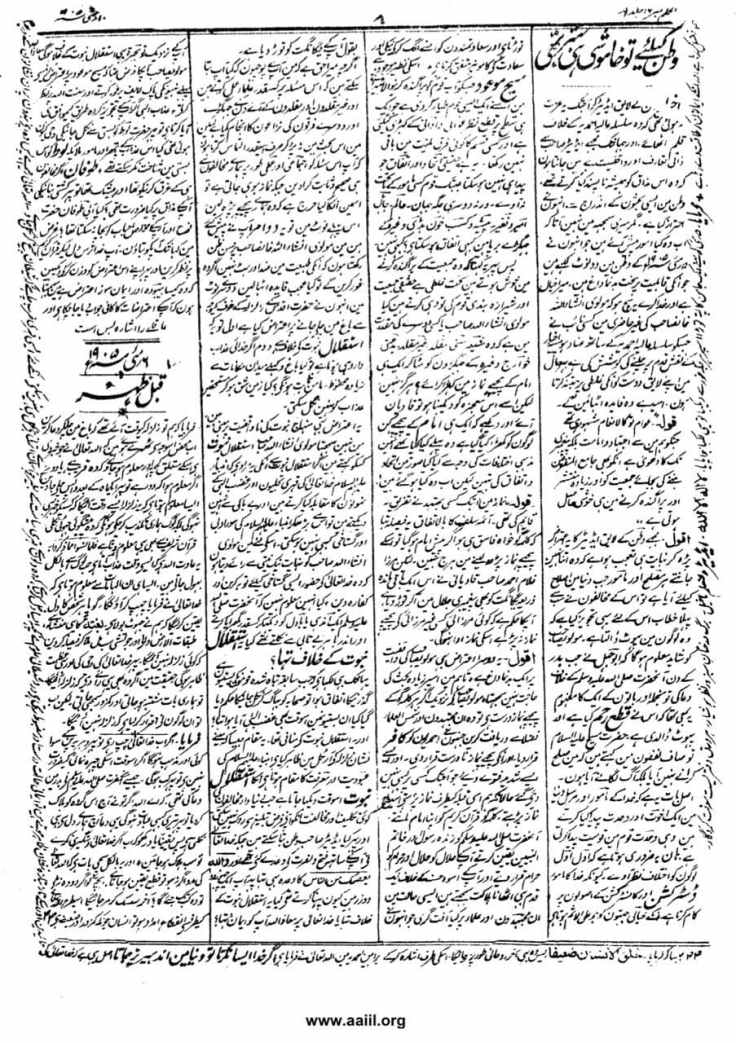 We found a reference in volume 2 of al Bushra on the earthquake of doomsday in May 1906 and MGA was told that you must see it, the next page promises a boy named Bashir Dawla and Shadi Khan etc. So we are still in 1906 and he’s getting mad revelations here that the earthquake is about to come! Protect yourself! His revelation is saying any day now the sign is about to come lol… and the page is full of warnings of punishment

This is interesting because some Muslim said that Izala Auham says that earthquakes can’t be used as a sign and MGA says that wait a minute, I was just quoting that statement of Jesus’ prophecy in Matthew which was attributed to him.

His son said that when the earthquake happened, MGA was freaking out and didn’t know what was happening and ran to his garden. All the Ahmadis were freaking out and there’s no mention of MGA giving any comfort. It even mentions that some kid saw a dream that goats were being slaughtered so MGA tried to fulfill his dream. There’s no mention of MGA’s dream or revelation.

Ahmadi’s have been told that the reason there are natural disasters in the world is because the world has totally rejected MGA. On 31 May, 1935 between 2:33 am and 3:40 am at Quetta, Balochistan, British India, now part of Pakistan. The earthquake had a magnitude of 7.7. [2] and anywhere between 30,000 and 60,000 people died from the impact. This ranked as the deadliest earthquake that hit South Asia until the 2005 Kashmir earthquake.[2] The quake was centred 4.0 kilometres south-west of Ali Jaan, Balochistan, British India.  Immediately after this earthquake, the Ahmadiyya Khalifa wrote “The Quetta Earthquake – A Mighty Divine Sign”.  In this book, he wrote that since the Muslims of Quetta has totally rejected MGA, they were thus punished with death. However, 18 Ahmadi’s died in Quetta as a result of this earthquake (See ROR of April 1935, page 273). In 1935, there were barely 174 Ahmadi’s in Quetta, this men, women in children, they also seem to have had a mosque. This is the beginnings of the Ahmadiyya jamaat in Quetta. 2 or 3 Ahmadi’s also died in the famous Bihar earthquake of 1934.

In Ahmadiyya, Muslims die in Earthquakes since they reject MGA, however, in 1935, the Ahmadiyya mosque in Quetta was totally destroyed and 14 Ahmadi’s killed

3 thoughts on “Initially, in 1891, Mirza Ghulam Ahmad dismissed Earthquakes altogether, however, after the Kangra earthquake of 1905, MGA changed”