Who is Kareem Ahmad? The Ahmadi mega-donor, indicted in federal court–involuntary manslaughter 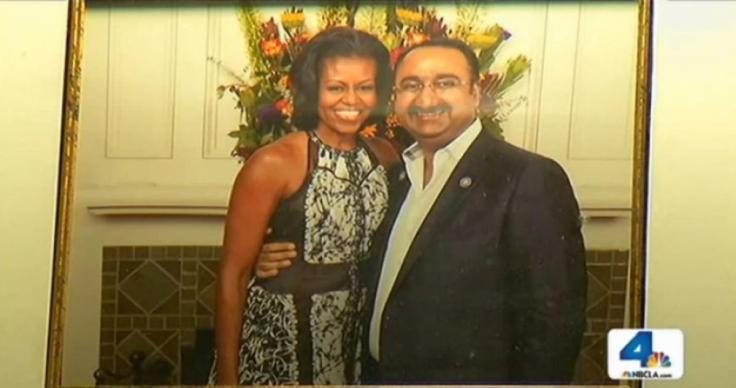 Intro
Ahmadis are criminals in many cases.  They dont care about any laws in any country, the live for the Mirza family and work tirelessly bringing them their money.  In this case, there is a fanatical Ahmadi in California who gave over 1 million dollars to the Obama campaign and was able to secure for his Khalifa a trip to congress, the keys to the city of LA, and many other perks.

His investment also helped #qadianis get their coveted Ahmadiyya Muslim Caucus, as well as getting many #qadianis air time on many news channels. Nevertheless, no one joined Ahmadiyya in the USA en masse. However, this did get #ahmadiyya validity for their asylum cases.

Kareem Ahmad had practically no history of political giving, and Landmark had little public profile, before he began giving large amounts of money to Obama, Democrats, and Democratic outside spending groups in 2012. Ahmed and his wife contributed well over a million dollars to Democratic efforts in 2012 — with the bulk of the money going to Priorities USA Action, the most prominent Obama-supporting super PAC.

Kareem Ahmad, in federal court for man-slaughter–2017 update
I took this entire story from here:

RIVERSIDE, Calif. (CN) — A Southern California doctor facing 77 criminal counts of insurance fraud has legally attacked a new state law that prevents him and his medical groups from collecting any of their fees for treating workers’ compensation patients.

In a federal lawsuit against California’s two top workers’ compensation officials, Dr. Eduardo Anguizola claims an anti-fraud law that took effect Jan. 1 violates his rights to due process, to make a contract and to hire and pay his criminal defense attorney.

While the law ostensibly was designed to deny medical criminals fraudulent fees, Anguizola et al. claim it is an attempt to keep doctors who face criminal charges from defending themselves in court.

“Labor Code Section 4615 represents California’s legislative response to complaints by local district attorneys that defendants who were merely charged, but not convicted, of medical fraud offenses, were using income from their professional practices to pay for their legal defense,” Anguizola says in his May 17 complaint against the directors of the California Department of Industrial Relations and the acting administrative director of the California Division of Workers Compensation.

Doctors who treat injured workers cannot bill patients directly, but must file court liens against the patients’ workers’ compensation benefits. Labor Code Section 4615 automatically stays all liens of a provider charged with any insurance, Medicare, workers’ compensation or similar fraud until the criminal charges are resolved.

The law “represents a money grab for assets that are unconnected to any charged activity and intentionally cuts off untainted funds that providers need to retain lawyers,” Anguizola says in a request for a preliminary injunction.

“Now that the doctors have provided a service in reliance on their contractual right to payment, the California Legislature has suddenly interfered, leaving doctors uncompensated and virtually incapable of being compensated,” the motion states.

The nominal defendants are Department of Industrial Relations Director Christine Baker and acting administrative director of the Division of Workers Compensation George Parisotto.

Christopher Jagard, chief counsel for the industrial relations department, said in an emailed statement that he is confident the law will be upheld.

“These reforms are not only entirely appropriate and constitutional, but are important to ensuring integrity within the workers’ compensation system and protecting injured workers from fraudulent medical practices,” he said.

The plaintiffs’ attorney, M. Cris Armenta of Manhattan Beach, said the complaint and motion speak for themselves and declined further comment.

Anguizola, 66, is a pain-management doctor who has practiced in Santa Ana for decades. “He is highly respected in both the medical community and the Latino community for his work providing needed care to injured workers,” his lawsuit states.

Three years ago, he was one of 15 doctors, pharmacists and business owners indicted on charges of defrauding insurers of more than $100 million for a very strong — even toxic — prescription analgesic cream made from three expensive prescription drugs.

The Orange County District Attorney’s Office also charged the cream’s developer, Kareem Ahmed, and two others with involuntary manslaughter in the death of a small child who ingested the cream.

He paid about $25 million in kickbacks to medical providers, including $2.3 million to Anguizola, for prescribing the cream to patients, the district attorney said in an August 2014 statement.

Anguizola’s defense attorney, Katherine Corrigan, did not return a call about the case. Ahmed’s attorney, Benjamin Gluck, said he cannot comment on it.

Soon after the lien-stay law took effect, Baker’s department posted a list of nearly all the doctors, chiropractors and others charged with crimes. Less than three weeks later, the department “boasted that it had stayed more than 200,000 liens with a total value of more than $1 billion,” the lawsuit states, citing a Department of Industrial Relations news release.

Anguizola has pleaded not guilty to all charges. Yet “because of the mere fact that charges have been made,” all the lien debt owed him by insurers is frozen. His “financial situation is dire, and he cannot afford a defense attorney.” He estimates his defense costs will be more than $250,000.

He says that is the real point of Labor Code Section 4615.

The lawsuit quotes Baker, speaking at an annual workers’ compensation event in March,’ apparently explaining the provision: “When we had our fraud meetings across various groups, the DA’s were the ones who said we are in the courts trying to convict the doctors. … ‘Can you do something about it?’ … Their defense was getting paid for by the liens. … And we have stayed all those liens.” (Ellipses in complaint.)

That shows the purpose of the law was to interfere with providers’ Sixth Amendment right to attorneys, according to the motion for a preliminary injunction. “The law encourages prosecutors simply to charge medical providers with fraud — regardless of the evidence — knowing that merely to charge is to remove the ability to defend.”

Because the statute of limitations continues to run while their liens are stayed, the providers could lose the right to collect for their work by the time their criminal charges are resolved. Every lien is stayed, whether related to work connected to alleged crimes or to “untainted” work, and providers have no right a hearing on the issue, Anguizola says.

The plaintiffs want enforcement of the law enjoined for violating their constitutional right to counsel, their right to enter contracts, their substantive and procedural due process rights, and the Constitution’s takings and supremacy clauses.

In order for Ahmadi’s to get asylum, they must prove “state-sponsored” violence

The Ahmadiyya Muslim Caucus was formed in 2014

22 thoughts on “Who is Kareem Ahmad? The Ahmadi mega-donor, indicted in federal court–involuntary manslaughter”