Compilation of Ahmadiyya views on Homosexuality

Intro
In this post, I’d like to compile all the things Ahmadiyya leaders, their official websites & other publications have told about homosexuality, whether positive or negative.

Some Quotations from the Presentation

“”””Adolescence is a time of experimentation and self-discovery. A young teen who is vulnerable and not guided and protected can be easily influenced by homosexuals and sexual predators*. Though this is a phase, some never leave this adolescent experience.”””

Transgenders have a “demon” inside them.

“””Here are a rare number of people who may be an exception and have a predisposition to behave like the opposite gender. Khalifa IV describes this person has having a “demon” inside and a personal dilemma which must be battled and suppressed.”””

Recommends against giving rights and recognition given to homosexuals. Don’t want homosexual people to come out and have a life of authenticity.

“””this is demonstrated by the fact that, as more recognition and rights are given, the number of gay people around the world has grown enormously.”””

– All the scriptures prescribe marriage only between a man and a woman.
– Marriage/nikah has to be entered with taqwa (fear/consciousness of God); is not compatible with homosexuality
– Marriage without God’s approval cannot have His favor and blessings -the couple cannot follow the model of the

– Prophet (saw) -the couple is choosing each other over God; cannot succeed

“”””they should pray for a change within themselves rather than entering this relationship which is not permitted.”””

Why Homosexuality is dangerous?

“”””Homosexual behavior is detrimental to societies and nations and can lead to their destruction.”””

Recommends against being friends with homosexuals.

Two issues with gay friends: 1. UnIslamic influence: many gays are outspoken about their sexual lifestyle. Even though you are not part of that lifestyle, they are sharing their experiences and beliefs with you as a friend. This makes it harder for you to uphold Islamic beliefs about your friend’s orientation.

“O ye who believe, be mindful of your duty to Allah and keep company with the righteous”(9.119). “O ye who believe! Take not others than your own people as intimate friends; they will not fail to corrupt you…We have made clear to you Our commandments, if you will understand.” (3:119)

NOTE: I’d like to point out that in a Q&A session Mirza Masroor Ahmad, Current Khalifa of Ahmadiyya, said there’s nothing wrong with being friends with a gay person as long as that behavior of the said person does not influence the Ahmadi friend.

The 4th Khalifa said this in “Islam’s response to contemporary Issues”;

P97 – “When there is no God-made law to be accepted, and absolute ethical values and noble traditions are challenged and defied daily, any legislation to discipline moral behaviour also becomes lax and more accommodating. The very platform, on which laws pertaining to moral behaviour are founded, begins to slip away. A comparative study of legislation in this area over the last few centuries would effectively prove the case in point. Gone are the days of Oscar Wilde when homosexuality was considered a crime by society, which would most mercilessly punish it. Gone are the days of chastity not being just a virtue but a social trust which, if violated, would be brought to account. This softening on crime is no longer seen as alarming.”

“”””While addressing the point that there may be some evidence that homosexuality is a genetically determined behaviour, Hazrat Khalifatul Masih Vaba said that even if this was the case, it still does not warrant the intense propaganda to legalise and promote homosexuality*. It is possible that in any community, a tiny minority may have such inclinations; according to an estimate the law of same-sex marriage was brought about in Canada for just 500 cases!* It is wiser to manage homosexuality by keeping such practices concealed. The underlying principle here is that of protection of the vulnerable members of the society. His Holiness expressed concern that in this day and age homosexuality is being promoted as fashion.

His Holiness advised that if Ahmadis should find themselves faced with such temptations, they should offer Istighfar(prayer offered to seek Allah’s forgiveness), remove themselves away from any situations that may trigger these desires*; then gradually they will be able to overcome these temptations. In response to a question, Hazrat Khalifatul Masih Vaba explained that homosexuality is a learned behaviour and stressed that the practice of homosexuality is inappropriate.* His Holiness warned that by accepting, promoting and legalising such actions, nations can find themselves on the path to destruction. The wrath of God destroyed one nation which insisted on this behaviour despite repeated warnings. His Holiness stressed that homosexual tendencies cannot be called a disease. Such behaviour is the product of  the environment; people are attracted to same-sex relationships because of their social interactions. When exposed to a certain kind of environment, the psychology of certain individuals can be affected and they become drawn to homosexual behaviour.  His Holiness warned that turning this individual behaviour into a national characteristic leads to destruction.”””” 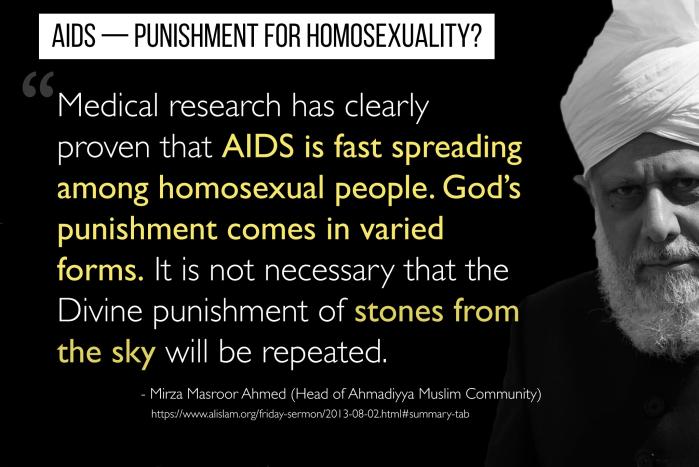 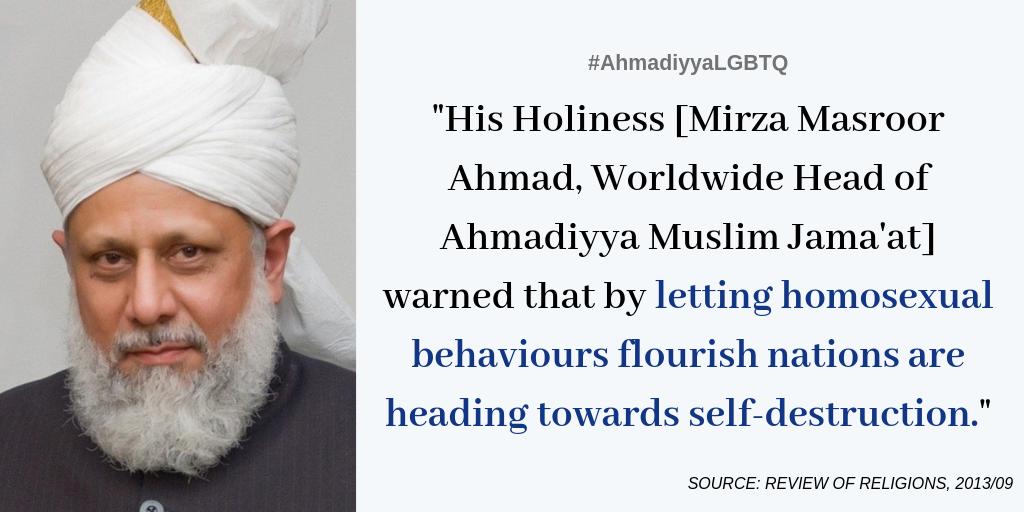 Mirza Masroor Ahmad, has said that Homosexuality is not a disease but a behavior which is the product of the environment a person lives in.

I am sure there are more quotable remarks made by Mirza Masroor Ahmad. Also, I am fairly certain previous Khalifas, Ahmadiyya Sadrs, Amirs and other official heads and perhaps even Masih Moud (Mirza Ghulam Ahmad) have written or said things about Homosexuality. I recommend others to post such material they know of so that this thread could be a go-to resource for anyone who wants to explore the things Jama’at have said or wrote of the whole LGBTQ issue.

Compilation of Ahmadiyya views on Homosexuality from islam_ahmadiyya