Intro
MGA was known to bribe his followers to give large amounts of money. In one instance, MGA wrote a letter to one of his richest followers, Seth Abdul Rehman. And told him that he received an Ilham that a very fortunate person would donate lots of money. So he (Mirza) was expecting you (Seth Abdul Rehman) to be that fortunate person as mentioned in the ILHAM. He further wrote to him that “LAKH, DO LAKH” 100,000/- or 200,000/- is not a big amount in the eye of God.

MGA wrote letters to Seth Abdul Rehman all the time. In fact, in 1899, MGA discussed the Yuz Asaf situation with him.

MAKTUB NO.53 (Maktubat e Ahmad Vol-2)
My respected Seth Abdul Rehman,
Assalamo Alaikum.
Your letter was received. Whatever you wrote reflects your sincerity and truthfulness. What I wrote to you was based upon the ILHAM which I received few weeks ago which is as under:
غثم غثم غثم لہہ دفع الیہ من مالہ دفعہ۔
“twinkle, twinkle, twinkle”, in arabic its “ghathm, ghathm, ghathm”

The Ilham was interpreted to me as “someone, in order to achieve his intended goal, would send to me a huge amount of wealth, as a homage from his wealth. I had entered this Ilham in my book. I had also written this Ilham in a neat writing and pasted it on the Masjid wall near my house. Although no particular time period and fortunate person to have this fulfilment of wish, was mentioned in this ILHAM, yet my mind was diverted to your success hence I prayed may that fortunate person be your good self. Is the amount of Rs 1 lac or 2 lacs a big sum of money ? DUA can create any revolution as it has the impact from earth to heavens. So I am in the thoughts of doing a top class DUA in your favour. It is just like a hunter withdraw his trap from one place and lays it on another place. (This sentence reflects true intention of Mirza i.e. hunting a rich man and squeeze some wealth from him), so I use different methods in my DUA for you. I will InshaAllah show you a living and approved DUA. May Allah bring a wrecked boat to the shore. Rest is ok. Plz convey my Salam to all nears and dears. 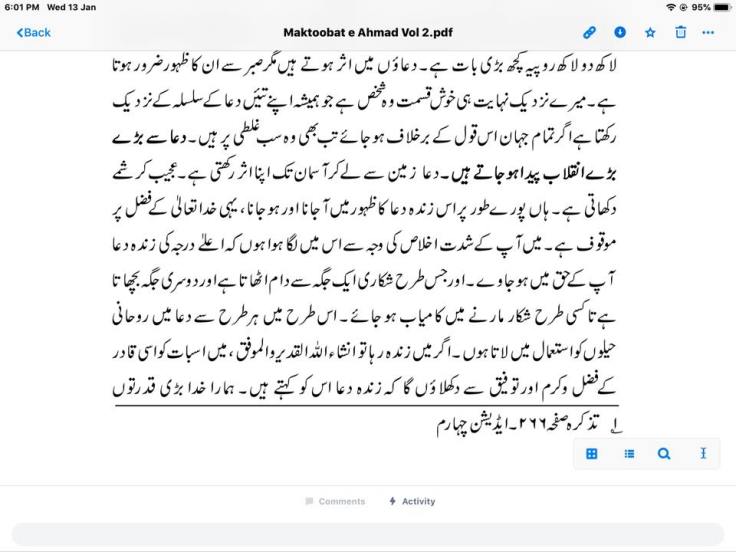 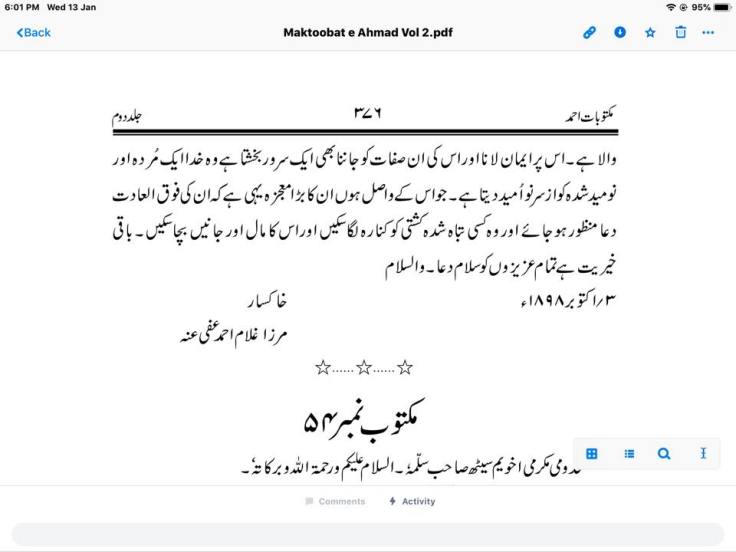