Intro
My team and I have found yet another rare-early biography of MGA.  We have posted scans and quotes in the below.  One of these quotes explains how the plague was raging in Qadian. The 1976 english edition of Tadhkirah also has lots of quotes. Syed Fazal Shah was quoted in some of these stories, was one of so called 313 sahabis of Mirza Ghulam Qadiani. He belonged to Lahore and worked at Jammu. He took Baiyat in 1891. He recorded revelation of Mirza regarding wall constructed by Mirza Imamuddin. His Brother Syed Nasir Shah was also among 313. MGA mentioned him in his book Izala aham. He died in 1924 leaving behind son Dr. Syed Inayatullah Shah of Temple Road Lahore. (Ashab e Ahmad by Dard).

Summary of Page 116
Mirza Bashiruddin Mahmoud Ahmad, the second Khalifa narrates that MGA had said once that God has informed him that these non Ahmadi Muslims will keep on diminishing and will finally be extinct one day.

“”””Syed Fazal Shah narrates that once Hazrat sb (MGAQ) said while he was writing the script of Fateh Islam, when he has put down few lines of it, suddenly Mian Mahmoud (Mirza Bashiruddin Mahmoud Ahmad), entered from outside. As I was looking on the other side, Mian Mahmoud quickly picked up the script of book Fateh Islam and drew some unparalleled lines on it. Hazrat sb says from this act of Mahmoud, I draw conclusion that Allah has put his signature on it.””””

“””Babu Fakhruddin sb Clerk “Taraqqi e Islam narrates that in the beginning of 1908 he went to his native town Multan. His father had not entered into the ahmadiyya jamaat. He objected that you call Qadian as Darul aman (the house of peace), whereas dozens of peoples have died out of plague in Qadian. In fact Darul Aman is my city of Multan, where plague has not spread and peoples of Multan are safe. When in Qadian, I mentioned this to Hazrat sb replied that ask your father to wait for some time, as god has told him that plague would spread at every village and town. So after some time plague spread in Multan as well killing 100 peoples a day.”””

The scan of this quote 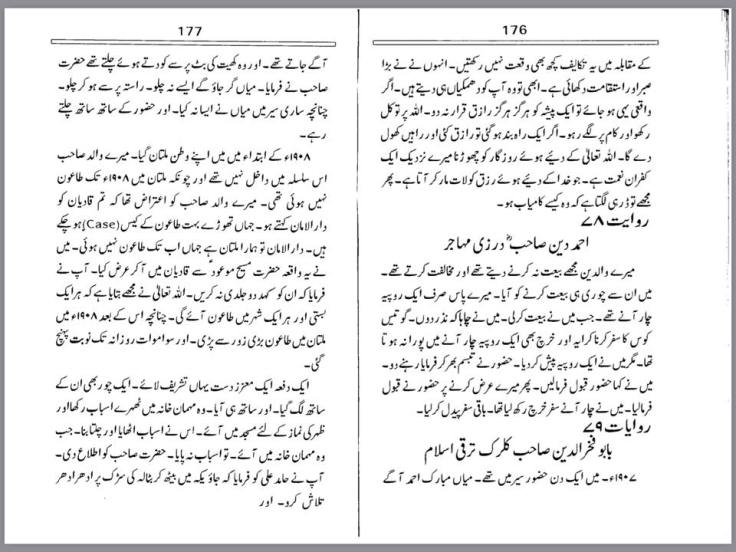 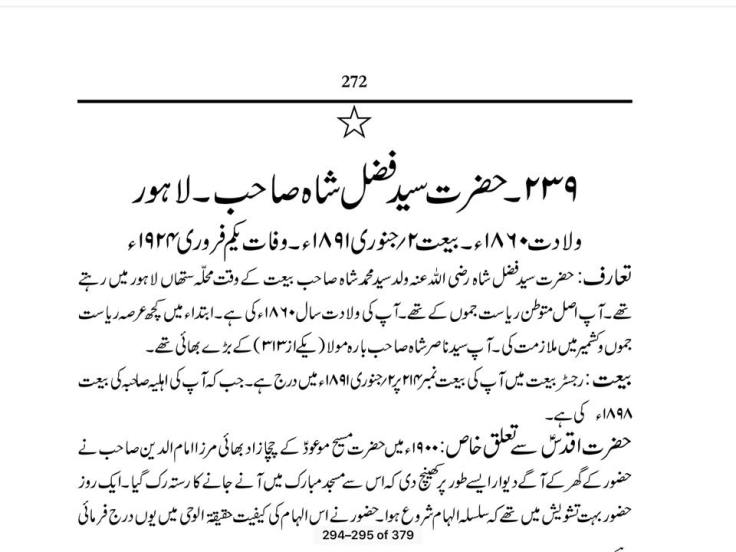 MGA touched the stomach of a young girl, pages 222-223
Qudratullah Sinauri the Author of book Seerat e Ahmad states that he married to another woman after the death of his first wife. However, the doctors and Hakeem told that his second wife would not be able to give birth to a child. He send his wife to hazrat sb, MGA) and wrote a letter to him informing him of the problem. Huzur said is your husband a doctor or a hakeem? She replied that neither he is a doctor nor is he a hakeem. However, this is the opinion of other doctors and hakeem. Huzur touched her abdomen with his hands and said you don,t have any defect, I will pray for you and you would have so many children that you would not be able to take. care of them.

The scan of this quote