Intro
Amatus Sami-Karim is an amazing woman and mother, she also seems to be born as an Ahmadi. Per this article, she grew up in the Southside Chicago area and her father was a Muslim with the Nation of Islam (NOI), he seems to have converted to Ahmadiyya and became the president of the Chicago Jamaat, his name is Abdul Karim, she posted a photo of him in 2022 on instagram. It’s unclear where and how Amatus Sami-Karim‘s mother converted to Ahmadiyya. Her dad worked as a jazz musician and also worked as an imam at a Southside of Chicago mosque where Amatus Sami-Karim spent a better part of her formative years. However, when her parent’s marriage hit the rocks, she went to live with her mum who earns a living as a social worker.

In 2001, she met her future husband Mahershala Ali in roughly 2001 and they fell in love. She began taking him to the local Ahmadiyya temple. This is how and why Mahershala Ali (at the time he was Mahershala Gilmore) became a Qadiani-Ahmadi. IMHO, his conversion story is a total lie, he only joined Ahmadiyya so that he could marry Amatus Sami-Karim. It should also be noted that Mahershala has 2 younger brothers and they are not Ahmadi. His father was also a soul train dancer. I remember seeing Mahershala at the Chino mosque in the mid-2000’s, he even played in a sports tournament through the jamaat, he is an amazing basketball player. He attended the Oakland Jamaat center for many years in the early 2010’s.

Amatus Sami-Karim is also an artist and very liberal. They have 1 child together, a daughter named Bari Najma Ali. Mahershalla laughed about getting alcohol spilled on him in this interview and has posed with many female actresses wherein he is embracing them and played a gay-man in a film and got a huge award for it. So why hasn’t this family been kicked out of Ahmadiyya? They normally kick out Ahmadi’s for attending weddings wherein there is dancing. The reason is that they pay lots of chanda and it would be a public relations nightmare if they ever kicked them out of Ahmadiyya. Thus, you will see the instagram account of Amatus Sami-Karim posting photo’s of vagina and other lewd things regularly with no fear of being kicked out of Ahmadiyya. Moreover, Mahershala Ali has chaired many jamaat events as they used him for marketing and etc.

Apart from her work as an actress, Amatus Sami-Karim is a composer, musician and performative conceptual artist best recognized as the wife of Mahershala Ali – an Academy Award-winning actor. The multitalented artist has worked in several mediums which include film, music, as well as theater and her major focus, are themes relating to history, identity, and culture.

She released her first EP titled Broken Compass in March 2014. Amatus Sami-Karim has made musical contributions to documentary movies like the 2009 New Muslim Cool as well as Daisy and Max which is the most recent one. Her acting credits include short movies like Jasmine, and Girl’s Time. Mahershala Ali’s wife was a nominee for Drama Desk Awards in 2018.

Her exact date of birth may not be known but it is public knowledge that she was born into an Islamic family. Her dad works as a jazz musician and also functions as an imam at a Southside of Chicago mosque where Amatus Sami-Karim spent a better part of her formative years. However, when her parent’s marriage hit the rocks, she went to live with her mum who earns a living as a social worker.

Amatus Sami-Karim showed interest in several forms of arts during her growing up years which later took her to Tisch School of Arts in New York. Upon graduation, she joined the Royal Academy of Dramatic Arts located in London.

Sadly, the actresses’ early life was fraught with a lot of heartbreaking incidents, within a space of 4 years, she lost several of her loved ones which include her brother, roommate as well as cousin to numerous gun violence incidents that happened separately. Amatus Sami-Karim, however, remained strong and courageous, channeling her pain into building a successful career which allowed the singer to give voice to her life experience which can be best described as complex.

1. She met her husband Mahershala Ali at Tisch School of Arts

Amatus Sami-Karim and her equally famous actor husband Mahershala Ali first met as at Tisch School of Arts in New York where they were both studying. They became friends after being introduced by a mutual friend and before long, love bloomed between them. Their official dating period lasted for a very long time before they exchanged marriage vows in 2013. The couple’s union has been blessed by the birth of their daughter Bari Najma Ali who joined the family on the 24th of February 2017.

According to People magazine, Amatus Sami-Karim’s husband became a Muslim over 2 decades ago after he visited a mosque with Sami-Karim and her mum. The report was made after Mahershala Ali’s advocating speech on love and acceptance at the ‘Screen Actors Guild’ award in January 2017. Ali revealed that after many weeks following his visit to the mosque, with his then-girlfriend, he was compelled to convert as the prayers he heard continued to resonate within his body.

Even being the offspring of a Christian minister did not deter him from changing his last name to a Muslim name, after which he became part of the Ahmadiyya Muslim Community. Ali is always quick to show his love for his wife, often calling her a strong and independent woman. He also gives her credit for her spiritual life which he describes as grounded

3. Her height is average

The details of Amatus Sami-Karim’s general body statistics have never been published, however, it is immediately apparent that the actress is of average height – she stands at 5 feet 6 inches tall.

4. She has had notable Collaborations

With her multifaceted career, the popular artist has had several on-project-collaborations with recording artists like Meshell Ndegeocello, Jneiro Jarel as well as Roy Hargrove – the deceased Grammy-award-winning jazz trumpeter. Amatus Sami-Karim’s resume boasts of top-notch clients like Rooftop Films, Pepsi, The Georgia Shakespeare Festival, 651 Arts, and many more.

5. Her Social Media life is quiet

The celebrated artist leads a sublime life as evidenced by her social media accounts, notable among which is Instagram, where she is known for posting loads of photos alongside her husband. Their joint pictures are clear evidence of their love, mutual appreciation as well as respect for each other. Ali in his tribute to his wife on her 2018 birthday posted a photo of themselves where Sami-Karim was kissing him while looking into the camera, the caption read – Aquarius HBD, signed with a heart emoji.

Who Is Mahershala Ali’s Wife Amatus Sami-Karim? The Couple Are Both Artists

No matter what, Oscar winner Mahershala Ali always makes sure to give credit to his wife, Amatus Sami-Karim, and to the family they’re building together.

Former Oscar winner and current Oscar nominee Mahershala Ali has become a mainstay on the awards circuit this year for his riveting performance as Dr. Don Shirley in Green Book. If he wins an Oscar in 2019, he will be the black actor to win more than one Oscar in record time (breaking Denzel Washington’s record of wins in 1989 and 2001).

Yet, in the face of all the accolades and attention, Ali always makes sure to give credit to his wife, Amatus Sami-Karim, and the family they’re building together. Here’s everything we know about the super-private couple and their life together.

On her website, Sami-Karim calls herself a “performative conceptual artist.” With a degree from the Tisch School of the Arts and a year of acting at RADA, she has done film compositions, an EP, music for the play “Sunset Baby,” and most recently sound design and music for the off-Broadway play “The Homecoming Queen.” She was nominated for a Drama Desk award for her work.

She’s a feminist and activist.

Sami-Karim feels strongly about promoting women’s rights, rights for minorities, gun control (which she says is a personal issue for her), and voting rights, among others, on her social media.

She met Ali at Tisch.

Ali mentioned in a Bustle interview that he and his wife go way back, and she’s been supportive from day one. “She and I have known each other for a really long time [about] 17 years. So, at this point, she’s seen a big shift in things, but at the same time, she’ll ground me real quick if I start feeling myself a little too much. She’s very real, like, seriously.”

She’s so supportive of Ali.

In the past few months, Sami-Karim has been sharing photos of Ali in his latest project— season 3 of True Detective. It’s just the latest example of her unmitigated support of her husband. She regularly posts to social media to support Ali on his birthday and important events, and is his biggest cheerleader.

Sami-Karim says Ali is as much a support for her as she is for him—a true partnership for the famous duo.

Apparently Sami-Karim gets Ali to branch out sartorially. Ali told Elle in an interview. “My wife, she’ll always kind of push it a little bit…She got me these pants that had big, horizontal grey and black stripes. And I was like, ‘You know, I just feel like I’m a little too old for those now.’ They felt like I should be 19 in those, but she’s got good taste.”

She hits the awards circuit, too.

At this year’s Golden Globes, she recorded Ali thanking people in his life and showed what it looks like to have the award engraved with his name.

They have a daughter together.

In 2017, Ali and Sami-Karim welcomed their first child, a baby girl named Bari Najma Ali. She was pregnant during awards season, and gave birth four days before Ali won an Oscar. Ali called her a “soldier” and said she had supported him all throughout the process.

On the name, “We were looking to do something simpler,” Ali told Us Weekly. Sami-Karim has since given us glimpses of adorable Bari. Coolest parents? Or coolest parents ever?

Her father seems to have been the local jamaat President in Chicago. There are photo’s of him going back to the 1970’s as he attended jamaat events. Abdul Karim is also mentioned in Mahershalla’s conversion story.

Ahmadiyya leadership expels its member for simply attending weddings wherein there is fun!!!

Mahershala and Jamaat from islam_ahmadiyya 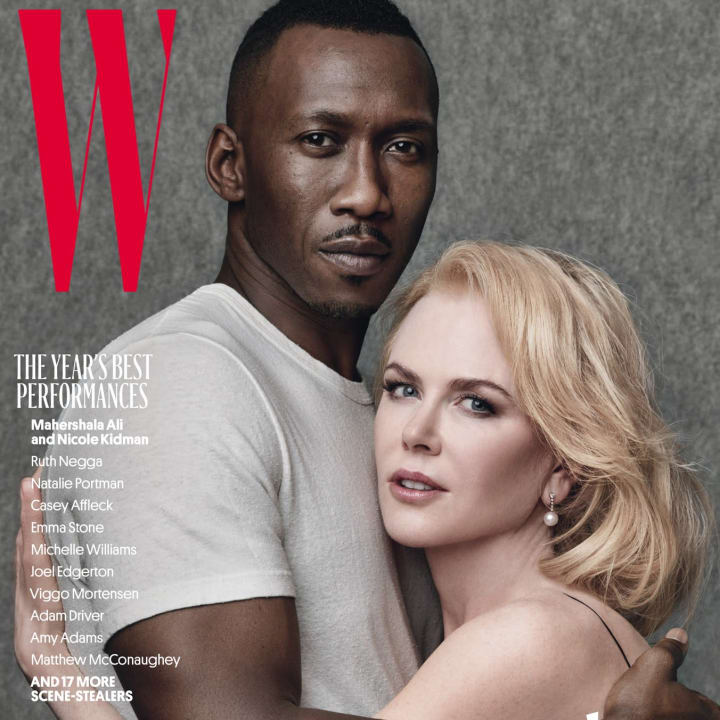 One thought on “Who is Amatus Sami-Karim?”