Intro
This essay was taken directly from here: http://reasononfaith.com/the-ahmadi-muslim-slogan-and-the-prohibition-on-love-for-non-believers/

This tweet from the Ahmadiyya Muslim run Voice of Islam (VOI) Radio caught my attention. This short post elaborates on some friendly twitter conversation on the subject.

My first tweet opening up this question was as follows:

From 5pm today, we will be looking at any allegations against Ahmadiyyat and clarifying misconceptions. If you would like to ask a question, TWEET US and our experts will be LIVE on air to answer your questions #VOIdrivetime pic.twitter.com/5MYVPBlIrT

Do you feel the ‘Love for All, Hatred for None’ slogan can be reconciled with MGA’s own verdict on the matter, from Essence of Islam (Volume 3)? 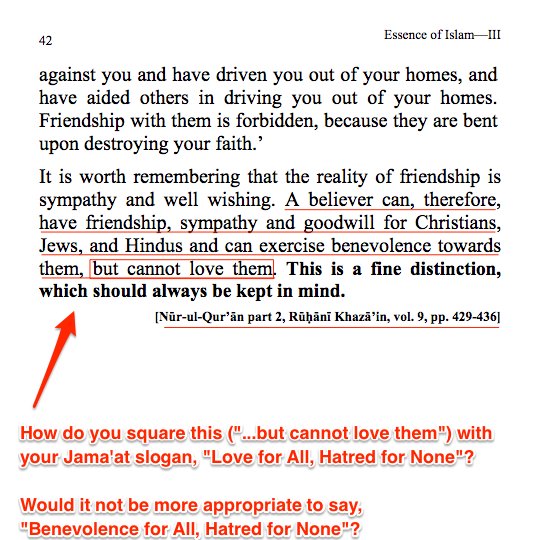 An Ahmadi Muslim, Nabil Ahmad Mirza, was kind enough to give me a detailed and thoughtful response: 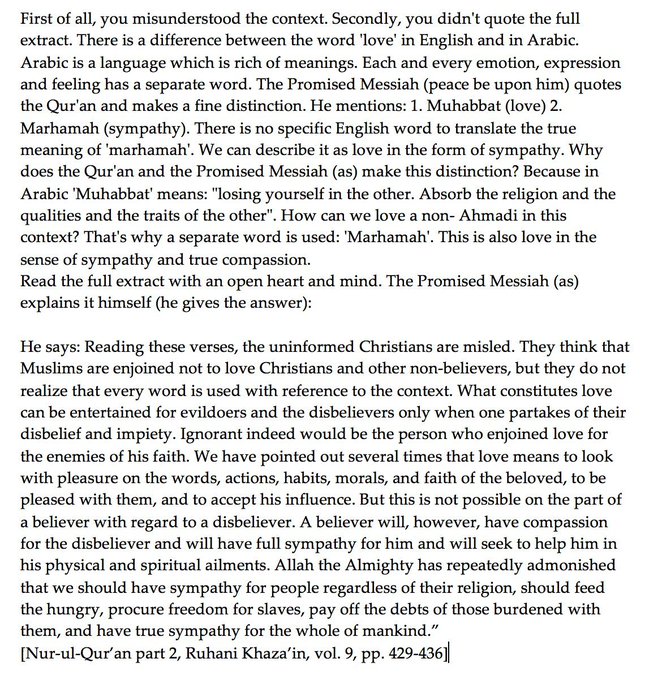 @ReasonOnFaith answer to your question.

No one doubts that most religions have plentiful references to having sympathy for others, that we should feed the poor, etc. That’s not even at issue here. The issue is above the not loving them excerpt from Mirza Ghulam Ahmad’s own translated writing.

To start, I’d like to thank you for your detailed response, Nabil.

With respect to reading the context, I too, would encourage everyone to read the pages that lead up to this quotation. Even the previous paragraph is taking about people who drive you out of your homes. Obviously, no one is talking about friendship with these people. Several pages back we read of the two types of words that can be translated as love, and how it’s the all consuming, lose yourself in the attributes of another kind of love that is being withheld.

The next paragraph which begins with, “It is worth remembering that the reality of friendship is sympathy and well wishing,” is where the context shifts to talking about friendships more generally.

So we are talking about what kind of relationship can be had with friends who are Christians, Jews and Hindus who don’t wish upon us any harm. These people are worthy of at least our benevolence since they are not persecuting us, nor do they wish to.

I think any fair minded reader would see this context shift.

So the issue really comes down to the word translated as ‘love’ here.

You’ve made an excellent point about muhabbat vs. marhamah. This discussion is of course, also seen in the preceding pages of Mirza Ghulam Ahmad’s own writing from which the excerpt in question arises.

Urdu and Hindi readers will be familiar with muhabbat, as it’s often used in Indian movies and songs for romantic love. This however, still poses a problem with a Muslim man who is allowed to marry a Christian woman. Should he not be able to have that deeply romantic love for his own wife? According to Mirza Ghulam Ahmad, the answer appears to be no. That makes such marriages which are sanctioned by Islam, necessarily viewed as something which Islam deems to be merely contractual and devoid of true romantic depth, if the Muslim man is one who truly also loves Allah.

The bigger point remains however: marhamah has already been explained as what can be used for non-antagonistic non-Muslims in these pages and it is always described as compassion and benevolence.

So a more theologically consistent slogan would have been:

“Compassion and Benevolence for All, Hatred for None”.

Did not Mirza Nasir Ahmad read these same pages of his master, Mirza Ghulam Ahmad, when formulating the Ahmadi Muslim slogan?

Finally, the other big implication here is that no Muslim could ever look upon a kind hearted, righteous Christian of excellent character, as someone they could love–more than that lesser ‘love’ of compassion and sympathy.

It reflects the arrogance of a superiority complex prevalent with Muslims—that no Jew, Christian or Hindu is worthy of emulating or looking up to as a moral example—merely because they have a different theological label and practice.

It’s one thing to say that love of a deity is incomparable to how we can love other human beings—but setting up distinctions between human beings based on their religious labels also appears unnecessarily divisive. Are we really thinking about nuanced religious attributes when we talk of loving our sisters? If they convert from Islam to Christianity, are we going to change what we feel in our hearts from muhabbat to marhamah? If it was marhamah all along, because we’re speaking of our own sister, then the entire distinction made by Mirza Ghulam Ahmad on page 42 of Essence of Islam, Volume 3, was unnecessary:

A believer can, therefore, have friendship, sympathy and goodwill for Christians, Jews, and Hindus and can exercise benevolence towards them, but cannot love them.

In my estimation, the only reason for Mirza Ghulam Ahmad to bring up the topic of love is to double down on the love that the Qur’an itself withholds, and to find some way to explain it. It makes sense not to love those who persecute you (Qur’an 3:118). However, the Qur’an is conspicuously silent on even acknowledging that a fair minded Christian could even exist who is worthy of love. One who is moral, pious, and yet disagrees with and rejects Islamic truth claims from reasoned and sincere conviction.

Is it hard to imagine a wonderful, selfless Christian human being? Consider a Christian who demonstrates charity, kind speech, selflessness, honesty, concern for their parents, for orphans and for the elderly. None of this could ever possibly amount to anything worth a muhabbat kind of love? By this token, Muslim family members who don’t think deeply about the minutia of Islam aren’t worthy of a muhabbat kind of love either.

What’s the common fine distinction then to go from mere compassionate love to a deeply immersive kind of love? The minutia of Islamic theology.