Intro
In 1897, June 20 and 21, were declared to be the dates on which the Diamond Jubilee of Queen Victoria was to be celebrated through out India. MGA issued a leaflet on June 7, 1897, asking his followers to reach Qadian before June 20 for this purpose.  Many years later, the report of this Jalsa were published in book form as part of the Ruhani Khuzain collection.  It was called as “Jalsa-e-Ahbab” or in english as “A Gathering of Friends” (as translated in Hidden Treaures).  It covers 37 pages in Urdu and was printed at the Diya’ul-Islam Press, Qadian, however, the first copy (edition) is missing from the records.

Content? (from Hidden Treasures)
The book gives particulars of the gathering, which was held in Qadian.  In response to his call, 225 Ahmadis gathered at Qadian on June 19, 1897, from distant parts of India. Meetings were held on June 20, and lectures were delivered in six languages, Urdu, Arabic, Persian, English, Punjabi and Pashto. The speakers included Hadrat Maulavi Hakim Nur-ud-Din, Maulavi ‘Abdul Karim, Maulavi Burhan-ud-Din of Jhelum and Maulavi Jamal-ud-Din. A congratulatory telegram was sent to Lord Elgin, the Viceroy of India, on June 20, 1897. Prayers were offered and the poor of the town were fed throughout June 20-22, and a feast was held on the June 21. Streets, mosques and houses were illuminated on evening of June 22. In short, this blessed gathering continued from June 20 to June 22, 1897 and it was organized with a joint contribution from the followers of the Jama‘at.

“”…………………………… Even Hakeem nooruddin is quoted by Mirza Qadyani to say that “We are so much indebted by the benefits of this British Government on us Muslims and by our Qur’an it is obligatory by Our obedience to this government and our self sacrifices. Does any one exist in this world that by their religion they can fulfill the rights of Government of British from their faithful hearts and from their Good intentions……………………..”

(As written by Mirza Qadyani on moment of Eid in his book Quoted in Roohani khazyian 15- Page 596 – chapter : Roodad jalsa dua ) 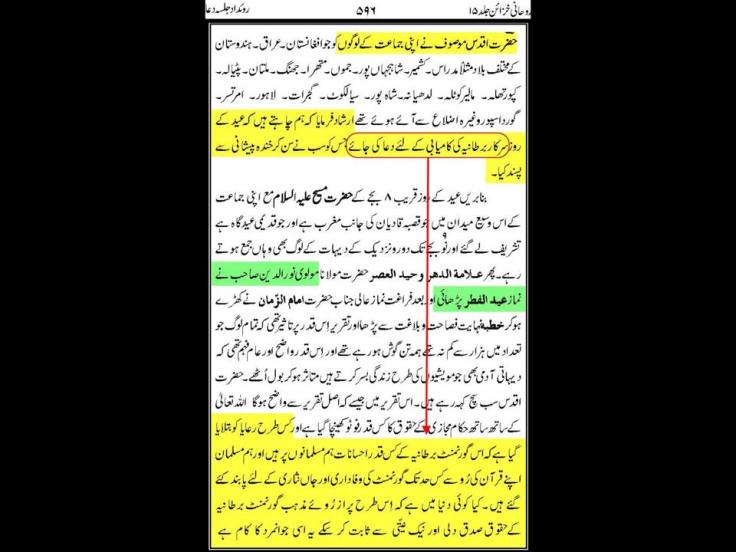