In the early 1890’s, Mirza Ghulam Ahmad claimed that the British Government’s control of India would end in 8 years

Intro
In 1923, via Seerat ul Mahdi, Mirza Bashir Ahmad told the world that MGA had a prediction about the British Government. Mirza Bashir Ahmad claimed that MGA had a revelation in Persian which indicated that the British government would end its rule in India in 8 years. In Seeratul Mahdi,  Volume 1 page 68,  Mirza Bashir Ahmad mentioned three names Haji Abdul Majeed, Hafiz Hamid Ali and Mian Abdullah Sanauri as witnessed that MGA received a revelation in which it was mentioned that the rule British Government will end in 8 years. One out of these three witness (Mian Abdullah Sanauri) says that he remembers this revelation like it was etched in stone.

However, in 1898, MGA denied this revelation (See  Roohani Khazain Volume 14 page 216 (Kashful Ghita) he denied this ILHAM altogether (see the scan in the below) pages 38-39 of the 1898 english edition of Kashf-ul-Ghita), and accused Molana Muhammad Hussain Batalvi of lying. It seems that Molana Muhammad Hussain Batalvi published this alleged ilham in his magazine Ishaat us sunnah (not found yet).

[Persian] [The British Empire will last for eight years; thereafter there will be weakness, disturbance and decline.]

Jalal ud Din Shams’ commentary on this persian revelation
Shams was an employee of the Mirza family and a major editor, you will see his notes all over the literature of the Ahmadiyya Movement. He claims that this revelation was fulfilled via the death of Queen Victoria in 1901. Shams doesn’t mention that this book was published in English in 1898.

Hafiz Hamid ‘Ali narrated to me (((Refers to Haji ‘Abdul-Majid))), …that Hadrat Sahib [the Promised Messiah] received the revelation:

Sahibzadah Pir Sirajul-Haqq Nu‘mani narrates that he has heard this revelation as following:

[Persian] [The power of the British will last for eight years, thereafter there will be the days of weakness, and decline.] 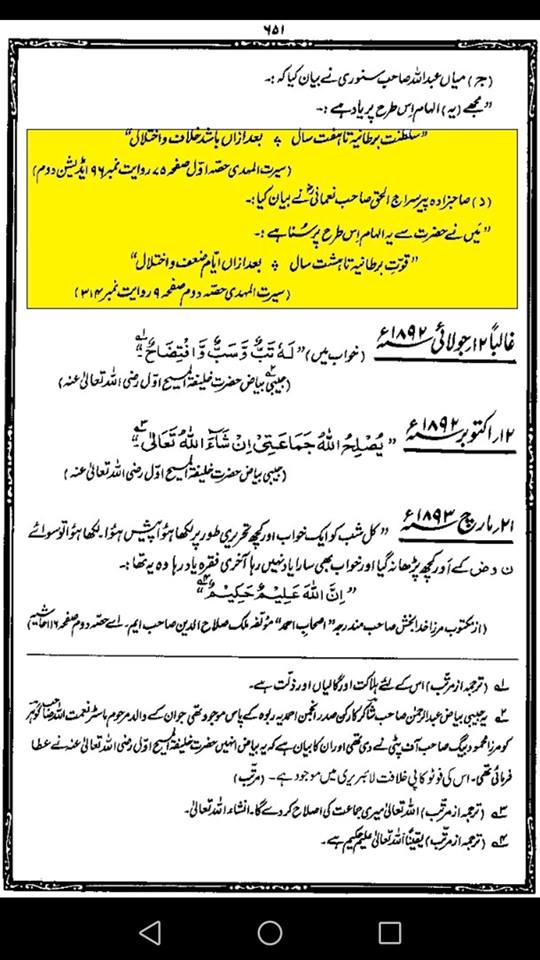 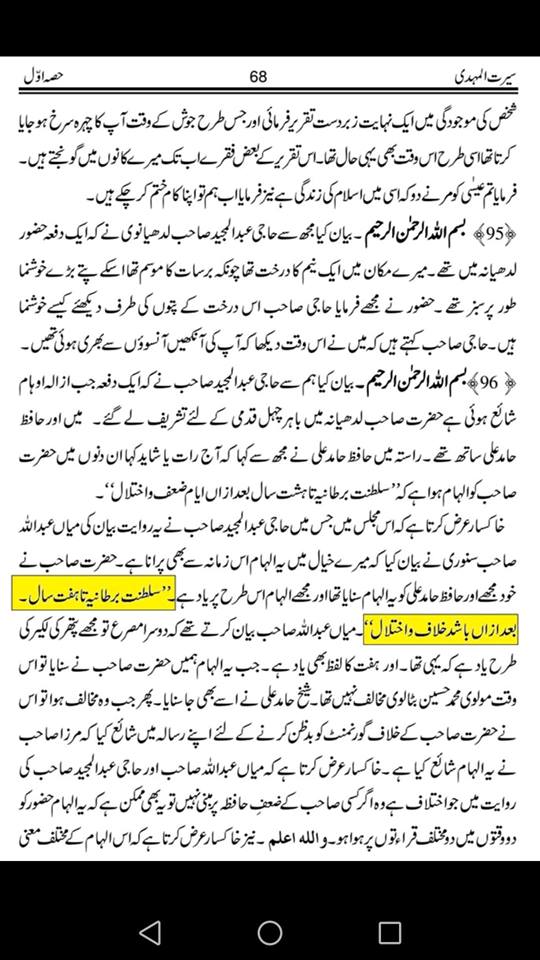 Was Noorudin the Ghost-writer of MGA?

Mufti Muhammad Sadiq was a student of Noorudin, pre-1891

8 thoughts on “In the early 1890’s, Mirza Ghulam Ahmad claimed that the British Government’s control of India would end in 8 years”