“””Mirza Sultan Ahmad told me via Moulvi Raheem Buksh sahib MA (it means that mirza sultan told Raheem Buksh and he told the writer Mirza bashir ahmad) that once our father fell from the window of Chobaara (upper level of the house) and he hurt himself on his right ARM-as a result the right hand stayed weak till his end age-(now Mirza bashir is adding to it) humble person (mirza bashir) was told by mother (Nusrat) that MGA was going to come down via the window -there was a stool in front of the window -which toppled lost his balance and he fell-breaking the bone of right hand (above it says right arm -but now it says -bone of right HAND was broken) and this hand stayed weak till the end- He could take the food to his mouth (put luqma in his mouth) but could not carry/hold the utensil of water to his mouth. Humble (Khaksaar Mirza bashir) narrates that -during salat/namaaz MGA had to support his right hand with the left (again here they are saying about the hand and not the arm). “”” 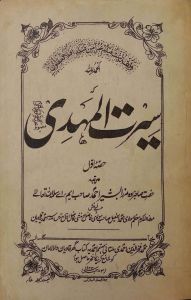