Intro
Professor Muhammad Ilyas (Elias) Burney was a academic in British India whose interest spanned from economics to poetry. He was Professor for Economics at Osmania University Hyderabad. We have now posted the abridged english version of the book here for free download: Qadiani Movement by Burney. “Burney is particularly known for his monumental work on the Ahmadiyya religion. His Urdu book. Qadiani Muzhab (Ahmadiyya Faith), is considered a comprehensive study on the subject”. Unfortunately this book is in Urdu only, but the merit of this Book is that its one of the most exhaustive (over 1000 pages) objective studies on the Ahmadiyya sect from an academic contemporary of that time of the Ahmadiyya Sect’s founding in early 1900’s. This book is not written by a “mindless mullah”, but by a well educated highly respected academic of that time. It deals from as wide ranging subjects such as the clothing style and family relations of the Ahmadiyya founder to the religious battles with Hindus and Christians and the controversies of the Ahmadiyya sect and the sects key figures. It also gives valuable references to the original sources in Ahmadiyya writings, which can be very valuable when researching the Ahmadiyya sect when trying to beat the Ahmadiyya with their own writings. This book therefore serves for the ahmadis as a valuable source to go back and censor their own writings and make any controversial source “disappear”. Therefore it is important that such a document is saved.

Some notes from this book
–he discusses the Woking Mosque and how it is always empty
–he mentions how a Lahori-Ahmadi imam, and ex-Ahmadi Mirza Azizur Rehman (could also be spelled as Aziz ur Rahman) quit Ahmadiyya and was cast in a movie in Germany called, “A Woman of No Importance”, which was published in 1936. He played the role of a servant who served whiskey to his master. Burney even posted a picture.

–he also mentions how Ahmadi’s had targeted Balochistan in 1948 and wanted their own state.
–he covers the Punjab disturbances of 1953, and the court of Inquiry of 1954
–he mentions a Nigerian newspaper called, “The Truth”, and quotes from it extensively, mostly from 1954-1955, he also mentions the name and counter-arguments of the top Ahmadi mullah, Naseem Saifi (who was the Ameer of the Ahmadiyya Jamaat in Nigeria in 1954).
–he quotes Ayyam e Sulh, page 65, on this page, MGA asserts that Maryam would roam around with Joseph and thus got pregnant.
–he quotes the Al-Fazl of 1924, wherein the Khalifa called all Muslims as Kafirs (see page 58), See, al-Fazl 26–29th, 1924.
–he goes on to quote rare editions of the Al-Fazl, wherein the Khalifa was guaranteeing success for all Ahmadi’s all over the world.
–he quotes Al-Fazl of 1914–1922 in praise of the British government
–he quotes the Tashizazul Adhan of 1911, and talks about the Takfir of Ahmadi’s. 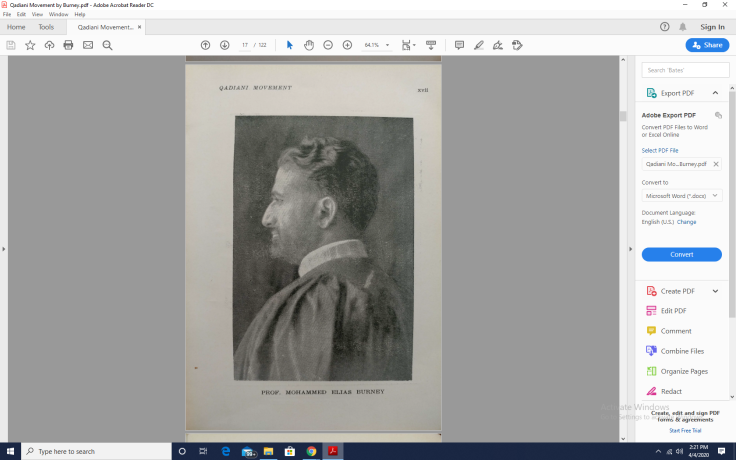 The full book is available as PDF: