Intro
MGA was supposed to be a reformer, however, he failed. Desi men are still sick, twisted, backwards, and generally lazy.  However, the remarks that MGA made about women are really bad. MGA basically said that men and women are not equal, he also said that men have been bestowed greater faculties than women, and women are less courageous than man, and women are the root of idolatry. MGA also said that women should unquestionably loyal to their husbands. MGA also said that men should never even hear women’s voices, which means no music from those female indian singers. In 1933, the Khalifa said that women shouldn’t work. The Mirza family always saw working women as a sort of curse. Even in 2020, women are not allowed to vote in general–local elections for Jamaat President and etc. Mirza Tahir Ahmad and Mirza Masroor Ahmad told Ahmadis that it’s OK to beat their wives and to force Hijaab.

The Quote
[Malfuzat, vol. 7, pp. 133-34](Via Essence of Islam, vol. 3, page 324
“””””If you desire to reform your own selves, it is essential that you also seek to reform your women. Women are the root of idol worship, for they are naturally devoted to decoration and ornaments. This is why idolatry started with women. They are also less courageous. Under the
slightest stress of hardship, they begin to cringe before their fellow creatures. Hence those who are completely under the influence of their women gradually acquire their characteristics. It is, therefore, necessary to constantly try to reform them. God Almighty says:

This is why men have been bestowed greater faculties than women. One marvels at the modern man who insists on the equality of the sexes and asserts that men and women have equal rights. Let these people raise armies of women and send them into battle and see the result for themselves. How would a pregnant woman discharge her duties in the battlefield? In short, women have fewer and weaker faculties than men. Men should, therefore, keep them under their care.””””””””” 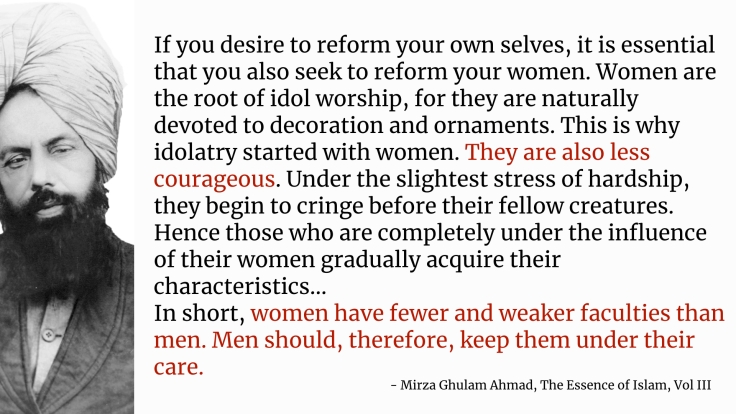