Ahmadis often (not always) deny the fact that their community issues call for social boycotting and shames the people who don’t comply with orders of the Khalifa/Nizam-e-Jamaat. To compile evidence for such cases, u/ReasononFaith recently started a thread here. In this regard, I’d like to share a circular from last year that was shared with all the Ahmadiyya Masjids in India and was read out 3 times during Friday sermons. 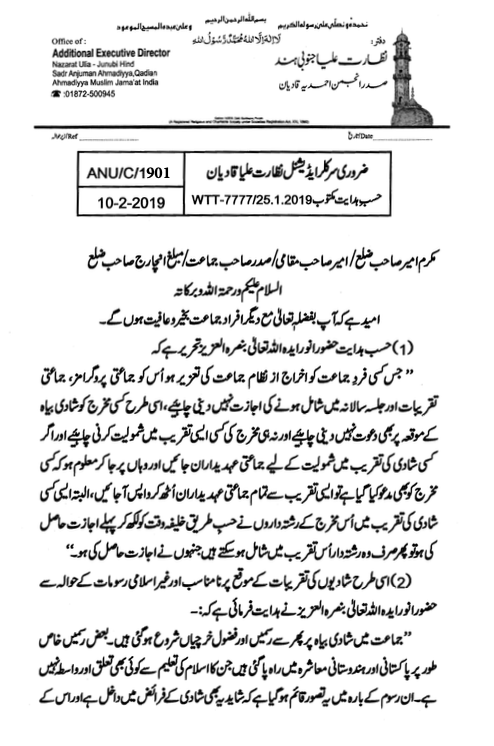 I don’t understand Urdu, but the circular was translated to my local language. So from that, I am giving you a rough English translation of the first point:

The injunction to leave the weddings upon seeing an excommunicated member is especially given to Jama’at office bearers. But the instruction to not invite excommunicated members to social functions or going to their’s seems to be a general command and it is enforced as such. Moreover, most of the local Masjids here in my place have an average of around 40-50 members including Khadims, Lajna & Ansar. We all know there are official positions in each of these branches, thus around 60-70% of all reasonably active Jama’at members would be an office-bearer.

And the final point is interesting. Only family members may participate in an excommunicated member’s wedding with prior permission. Do you see how ridiculous this can get?

For example: Let’s assume I am an excommunicated member. My cousin, who’s still an Ahmadi is getting married within Ahmadiyya itself. No worries there. But for my cousin to invite me who’s living one block away, to his wedding, should get the permission of Mirza Masroor Ahmad in London (since the circular bans inviting excommunicated members to social functions). So with permission (granted only because I am family), my cousin invites me to the wedding. And I go to the wedding. At the wedding, one of the office-bearers who’s not a relative of my cousin sees me, he realizes I am an excommunicated member, so as per the instruction of the above circular he should leave the wedding immediately! Yes, that ridiculous is the instruction of the circular!

What are some common reasons for getting excommunicated from the Jama’at?

But people are *not* excommunicated generally for other things like consuming alcohol, using interest, fraud, etc. There might be cases, but that’s not a general thing.

In short, the most common way of getting excommunicated from Ahmadiyya is when an Ahmadi marries someone outside the community, and when some Ahmadis go and participate in those weddings.

(I heard once a family was excommunicated because they did not have strict gender segregation in their wedding. I am not sure of this, but it seems something that can happen)

Did Jama’at excommunicate anyone for participating in a marriage or was this an empty threat?

Yes, they did. There were plenty of people who were excommunicated for participating in the marriage of other excommunicated people. Once excommunicated, they are required to write a letter to Hazrat Mirza Masroor Ahmad Khalifatul Masih Al Khamis Ayyadallahu Ta’la Bi Nazril Azeez himself seeking forgiveness for their grave error. Then wait for a few days and they’ll get his reply forgiving them. This is simply a power play, to keep people in line, to make them realize at the end of the day Khalifa is still the boss. One person, I personally know, is rich and contributed possibly millions to Ahmadiyya and to this day he financially helps countless Ahmadi families. He’s very humble and friendly even to the poorest. Being such a guy he once went to a wedding which was banned by the Jamaat. He had to go because the family members (not just the Ahmadi side, but also the family of the groom who was non-Ahmadi Muslims) were so very close to him. And guess what? He was excommunicated for this! This just one case. Dozens of ex-communications happened for merely participating in weddings.

Mass Expulsions in Ahmadiyya from 2010