Intro
Ahmadiyya and the Mirza family are stuck in 1900, in terms of women’s rights and many other topics like physics, quantum mechanics, child marriage, abortion, loyalty, divorce, supporting colonialism and etc etc etc.  In terms of how a woman should be obedient to her husband, MGA was strict and mean.  He treated his wives harshly and never gave them a shred of respect.  We have a found a reference from Malfuzat which perfectly explains MGA’s position on this topic.  We found a book called, “Islam on Marital Rights” by Maulana Shaikh Mubarak Ahmad (1988).  This book is actually a speech that was given at the 1969 Rabwah Jalsa Salana.  Maulana Shaikh Mubarak Ahmad was the Ahmadiyya missionary in-charge of East Africa for many years.  In this book, Ahmadiyya leadership is telling Ahmadi women that they are forced to be obedient to their husbands, per Quran and Hadith.  However, this isn’t totally correct, Islam doesn’t exactly endorse this system, these verses and hadith have a context, that is farming communities, wherein men and women have defined roles, it doesn’t apply to situations wherein the wife and husband both work and share responsibilities.  I recommend that my readers read this book in its full entirety.

The quote from Malfuzat
See pages 15-16 of “Marital Rights”.

“This should be regarded as a act of cruelty on the part of the husband for similar obligations have been imposed upon men also in respect of their wives.  These obligations are so onerous that it looks as if the woman was placed on the throne and the man commanded to serve her and be at her beck and call for the procurement of everything she needs.” (Malfoozat: Vol. 8; pp. 441-445). 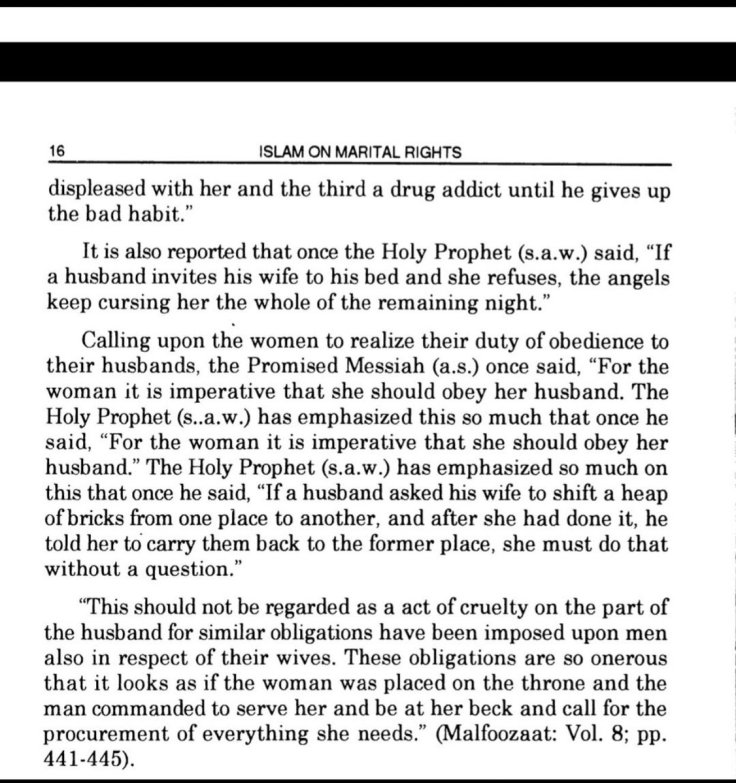