Intro
In 39:42 (39:43 in the Qadiani Quran), Allah tells the world that WAFFA can mean other than death (and 6:60). In these verse, even #ahmadi authors agree that WAFFA doesn’t mean death. Historically, Chapter 39 was revealed at Mecca, and one of the earliest uses of WAFFA by Allah has he explained the “taking” of something, in this case souls (See page 2267). Quranically, Allah is allowed to do anything, since allah has power to do all. Muhammad Hijaab explained the same concept in his video on the subject. Furthermore, MGA refused to discuss this verse from 1880 to 1906. Finally in 1906, in Haqiqatul Wahy, he discussed the verse and still he didn’t mention how WAFFA in this verse doesn’t mean death, instead it means a taking, thus, opening the door for WAFFA in 3:55 and 5:117 to mean NOT DEATH, but a taking. In fact, in 1884, MGA was translating WAFFA as a taking (not death), however, deep in MGA’s heart and brain, he knew that he was the second coming of Esa (as) and was thus pretending to hold the common islamic beliefs, i.e., that Esa (as) was alive in heaven. One last thing, 4:159 proves that Esa (as) hasn’t died yet. Watch my video explanation of 39:42 here. Also, watch this hanafi scholar (Shaykh Mohammad Yasir is semi-famous Hanafi scholar on Islam) explain how 39:42 proves that Esa (as) was captured by Allah and hasn’t died yet. Tafsir al-Tustari and all other Tafsir’s agree on the usage of WAFFA in 39:42 as they connected it to the physical ascension of Esa (as).

The verse
“”Allah takes away the souls of human beings at the time of their death; and during their sleep of those also that are not yet dead. And then He retains those against which He has decreed death, and sends back the others till an appointed term. In that surely are Signs for a people who reflect.”” (See alislam.org).

MGA’s commentary on this verse?
MGA and his team of writers mentioned 39:42 in 1906–1908 in 2 books, Chashma-e-Ma‘rifat and Haqiqatul Wahy. However, they didn’t address the issue of WAFFAT e Esa (as). We believe that they did this purposely. It also seems to have been mentioned in 1900 via Malfuzat, Vol.-2, online english edition (see page 257), however, Malfuzat V-2 was published in 1960 from Rabwah and thus was most likely tampered with by the Ahmadiyya team of editors (the clerics). Nevertheless, in Malfuzat V-2, MGA does not address the glaring issue of WAFFA=taking, he avoids it altogether. He simply argues that once a decree of death is issued, death comes and no one can go backwards in this regard. However, Esa (As) hasn’t died yet (see 4:159), and thus Esa (as) can return. Further, Quran 39:42 (39:43 in the Ahmadi quran). 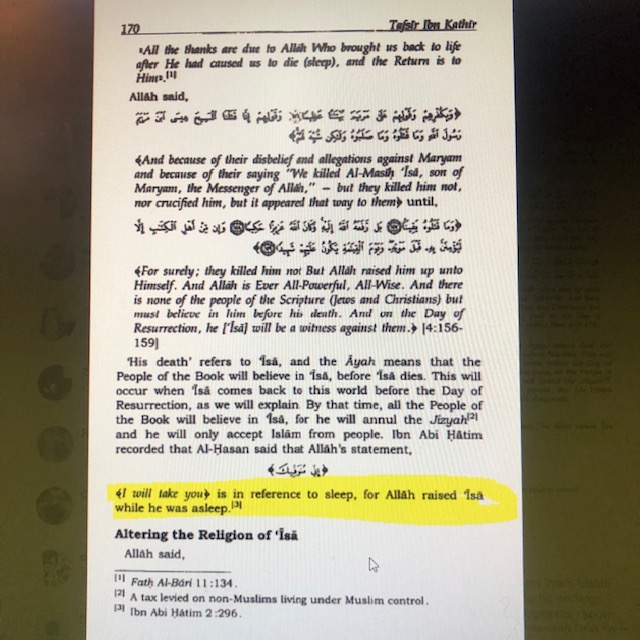 Ahmadi arguments
Ahmadi’s have a strange set of arguments here too. They argue that:

“””yes, ‘(تَوَفّٰ)’ does means ‘to take’ but only when the word Nafs is followed after it and the subject is not the day of Judgement, like the following'(يَوۡمَ الۡقِيٰمَةِ​ ۚ ثُمَّ تُوَفّٰى كُلُّ نَفۡسٍ)’ for which 3:161 means, for the day of judgement, ‘ever soul shall be fully repaid’. Even though the word Tawaffa is followed by Nafs, it is still not translated as ‘To take’, but in fact, it is ‘fully repaid, or paid in full’, but again because of the SUBJECT is ‘Day of Judgement’.”””