Intro
As you must know by now, #JusticeforNida is the scandal to ever come out of the Ahmadiyya Movement. @RanaTanver is the only journalist who has been covering the story thus far. About 9 hours ago he released his essay on the Samaa.tv website, we have posted it in the below also. Rana Tanveer gave us some new details in his essay. He confirmed that the police were alerted to life long raping of Nida Al-Nasser on July 22, 2021. The leaked audio call(which was leaked by Shandy Shah) is dated by Rana as July 3rd, which proves that she hadn’t went to the police yet and the Khalifa was begging her not to. Nevertheless, she also accused Mirza Maghfoor Ahmad of asking to have sex with her. In the famous leaked audio, Mirza Masroor Ahmad referred to his elder brother (Mirza Maghfoor Ahmad) as a “lucha” or “a man with no boundaries” in english. This means that he is running free and does and says whatever he likes with no punishments. This explains why he accused the youth of the Ahmadiyya jamaat of drinking and doing drugs in 2019. In error, he writes that the Ahmadiyya movement has 10 million adherents, that is not accurate, its probably 125,000. Another piece of new information is that Nida had moved to Rabwah in February 2017 to start teaching English at different Jamaat colleges, including Nusrat Jahan College, Nusrat Jahan Academy and Mariam Girls School. She also served as a public relations officer there. Nida’s mother arranged her engagement with an Ahmadi man living in Serbia without her father’s permission. The date for marriage was decided, but then Nida’s father pressured the man to leave her by threatening to have him expelled from the Jamaat, said one of Nida’s friends in the UK. On March 1, 2021, Nida’s engagement was broken off, prompting her to share her sexual assault to her mother, aunt and her community head. Nida is now living at an undisclosed location in London under police protection, after receiving threats. “My life is ruined. I suffered for almost two decades, and the Jamaat system is threatening me,” she told this reporter. “To hell with it if it cannot protect a helpless girl like me.”

Rana Tanveer is a journalist based in Canada. While working for Daily Times and The Express Tribune in Lahore, he became an expert on Islamism and the treatment of religious minorities, particularly the Ahmadiyya community. He was a 2014 fellow at Columbia University’s Institute for the Study of Human Rights. He can be reached @RanaTanver.

An Ahmadi woman’s accusations of “historic sexual assault” by her father and close family members of the global leader of the congregation are being investigated by the London police in a case that has reverberated around the globe in Ahmadiyya circles.

In July she filed a complaint to the London Metropolitan Police, which has confirmed that an investigation is ongoing. “On July 22, 2021, police received a number of allegations of historic sexual assault reported to have taken place in Wandsworth, Surrey and Dorset between 1987 and 2012. Detectives from the Met’s South West Public Protection team are investigating. A man has been interviewed under caution and enquiries continue,” the Press Bureau of the London Metropolitan Police told this reporter by email.

Nida has accused the spiritual leader’s brother-in-law Mahmood Shah, and Dr Mirza Mubashar Ahmad, an orthopedic doctor at an Ahmadi hospital in Rabwa and a relative of the leader, of raping her repeatedly during her four-year stay in Rabwa. She has also accused her own father of raping her repeatedly over a number of years when she was younger in the UK. She has accused Mirza Maghfoor Ahmad, the brother of the leader and head of the US Jamaat, of trying to persuade her to have sex which she refused.

The controversy has shaken the top leadership of the 10 million strong and closely knit Ahmadiyya community spread across the globe.

Nida first went to the Jamaat’s leader five months with the allegations before she went to the London police, and repeatedly pressed them for a response. The spiritual leader called her on July 3, asking her not to make her accusations to anyone outside the family. She told him that if he was not taking any action within the Jamaat, she would go to the police. He said nothing would happen and people would forget it in a few days. Nida recorded their 44-minute conversation, conducted in Urdu, and it was posted on social media on December 11. If she spoke out publicly, he told her, she would face ex-communication. The Jamaat’s leadership has not challenged the authenticity of the video and Nida confirmed the recording is genuine.

Nida went to the police on July 22, 2021, when she called from her hotel room in London while quarantined after a recent visit from Pakistan. She told this reporter that she has provided police with 15 out of 322 emails of Mubashar and WhatsApp chats with Mahmood Shah to support her claims. Some sources in the UK Jamaat said that Luqman, Masroor and some other leaders of the Jamaat have recorded their statements before the police.

Rafiq Ahmad Hayat, speaking for the UK Jamaat over a WhatsApp message, said it is consulting with the UK law enforcement agencies to investigate the allegations. “Given the ongoing police investigation, I would request all Jamaat members to refrain from speculating or commentating on these issues or sharing or recirculating the audio recording whether within the Jamaat or externally.”

Fareed Ahmad, secretary of foreign affairs of the UK Jamaat, told this reporter over email that the matter is with the police and the Jamaat is cooperating with them. “A separate internal investigation is also taking place but a highly sensitive situation and the privacy rights of all involved mean we are unable to comment with any specificity on the matter while the investigations are ongoing,” he said.

Ahmadi leaders are telling members not to speak about the case, but Ehsan Rehan, the editor of Rabwa Times, an Ahmadi newspaper, tweeted: “I am shocked, ashamed and saddened by the recent claims of sexual abuse by a member of the Ahmadi community. I hope police launch a full investigation and bring the abusers to justice.” The tweet has since been deleted.

A price to pay

After returning from Pakistan, Nida took admission at a university Media Studies program but since the audio leak, she has been unable to attend class and was granted an extension till March to submit her assignments.

Nida’s mother arranged her engagement with an Ahmadi man living in Serbia without her father’s permission. The date for marriage was decided, but then Nida’s father pressured the man to leave her by threatening to have him expelled from the Jamaat, said one of Nida’s friends in the UK. On March 1, 2021, Nida’s engagement was broken off, prompting her to share her sexual assault to her mother, aunt and her community head.

Nida is now living at an undisclosed location in London under police protection, after receiving threats. “My life is ruined. I suffered for almost two decades, and the Jamaat system is threatening me,” she told this reporter. “To hell with it if it cannot protect a helpless girl like me.”

While sexual abuse scandals have rocked the Catholic Church, and the #MeToo movement spread beyond Hollywood into religious groups from the Southern Baptist umbrella to Jewish synagogues and schools, most of the Muslim world has yet to experience the heat of an organized #MeToo movement. Still, there are many signs that women are increasingly finding the courage to confront sexual harassment and abuse within their own communities. One such attempt inside Islam began in Egypt as #MosqueMeToo in 2017. But while many survivors shared their narratives, those accused faced no legal consequences. Tariq Ramadan, a Swiss academic and philosopher, has been in the news since November 2017 when he was accused of raping two women. By October 2020, he was charged with raping five women.

Women in most Islamic societies who shared rape allegations suffered social stigma and pushback, a challenge that still discourages many victims from going public with their stories. In 2018, human rights activist Nadia Murad received the Nobel Peace Prize and became a leading voice creating awareness about sexual harassment and sexual violence in the Muslim world, encouraging more women to speak up about sexual abuses. Murad is an Iraqi Yazidi who was kidnapped, raped and held by the Islamic State for three months. She is now a UN ambassador for survivors of sexual violence and genocide.

A number of women of the Jamaat-e-Ahmadiyya from different countries are raising their voices for Nida by associating their bitter experiences with hers on social media. Among them are Zahida Nisar from Germany, Arshi Malik from Pakistan, and some from the US under aliases to protect their identity. They are speaking at a social media platform set up by Toronto women Wajeeha Zafar and Affaf Azhar to keep a spotlight on Nida’s case. Other than speaking on a number of YouTube channels, Wajeeha and Affaf have set up an international WhatsApp group which has 241 members from around the world and from a variety of faiths. Many of those who belong to the Jamaat-e-Ahmadiyya, as the congregation is known, use different names because of their fear of punishment, including excommunication.

“Nida’s case has strengthened the voice she has been raising to highlight the rape incidents in the Jamaat but no one was listening to her like many other women for many decades,” Affaf said. “Nida’s voice will encourage many other women of the Jamaat to come out with their horrible stories of victimization.” All of the above-mentioned women were born in Rabwa, a small town in Pakistan that has been the spiritual headquarters of the Jamaat since 1947. Ahmadis have been repressed in Pakistan and many have moved abroad. Toronto, London, Washington DC, and Frankfurt have become the bases for their congregation in the West.

The majority of Muslims, both Sunni and Shia, consider Ahmadis to be heretics, rejecting the claim of the Jamaat’s founder, Mizra Ghulam Ahmad, to be a prophet. Some of them, particularly from Pakistan, are using Nida’s case to further this view on social media. 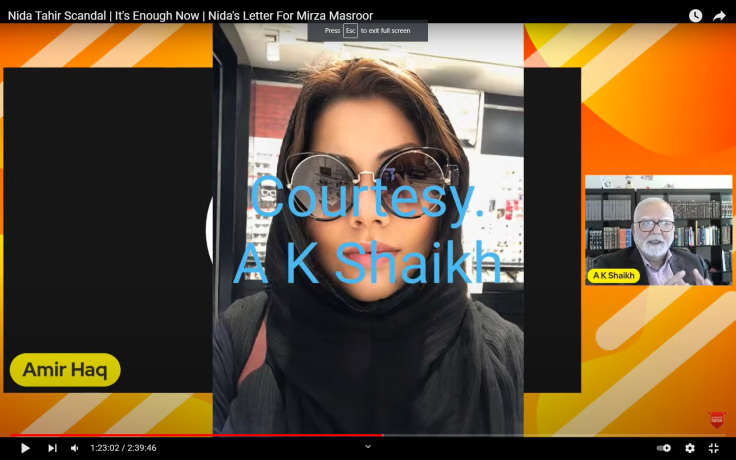 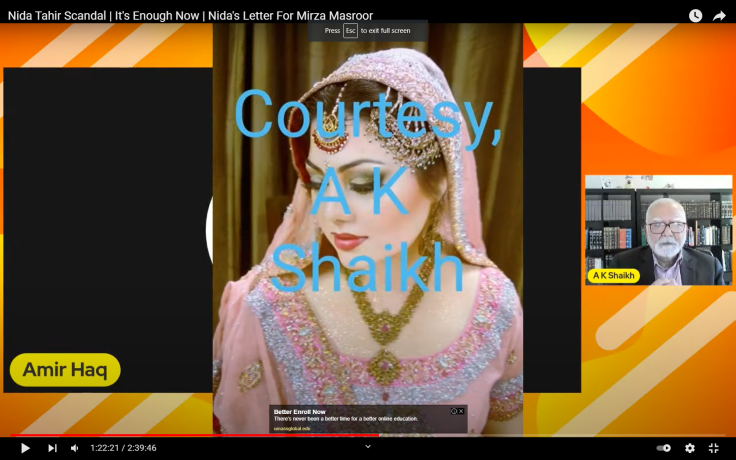 Who is Mirza Maghfoor Ahmad?