Intro
MGA mentioned the story of the red drops in 1886, in his book, Surmah Chashm-e-Aryah, “Guidance for the Aryas”.  This book was created before MGA rejected the miracle of the physical second coming of Jesus.  Hence, MGA was on-board with the physicality of miracles.  However, after MGA died, all of those miracles were explained away by rational means.  Moreover, MGA always had lots of men and women attending to him while he was in the toilet.  Most likely because his right hand was broken and he thus couldn’t properly wipe himself.  Abdullah of Sannour was the toilet attendant in this case, he claims to be a witness for these red drops and was even buried with MGA’s clothes which were stained as such.  MGA seemed to be fond of sleeping in bathrooms, in fact, when he died in Lahore, he was close to self-made bathroom and was attempting to clean himself.  Finally, it is important to note that this story is from 1884, but MGA didn’t mention it until 1886 in his book.  This incident came from an era before MGA had married his second wife, thus MGA would always spend long hours with his toilet attendants.

1886, the Quote
“”””I remember that on one occasion I saw in a state of vision that I had written certain divine decrees with my own hand setting out events in the future and then presented the paper to Allah the All-Powerful, Gloried be His name, for His signature. (It should be remembered that
it often happens in visions and divinely inspired dreams that some divines attribute of Beauty or Majesty are beheld by the recipient of the vision in the form of a human being and the person seeing the vision thinks, by way of symbolism, that he is actually beholding God, the Absolutely All-Powerful. Among those with experience of spiritual visions, this matter is well-recorded, known, and accepted as an established fact. It cannot be denied by anyone with experience of visions.) To the same Peerless and Self-Sufficient Being—Who manifested His attribute of Beauty to my mind in the state of vision and appeared to be God, the All-Powerful—I presented the document containing divine decrees for attestation. And He, Who was manifesting Himself in the form of a Ruler, dipped His pen in red ink and first flicked it in my direction and with the
rest of the red ink which remained at the point of the pen He put His signature to the document. Thereupon, the state of vision came to an end and when I opened my eyes to look at the material world around me, I witnessed several red drops falling on my clothes. Two or three of the drops also fell on the cap of one ‘Abdullah of Sannour (Patiala State) who was at the time sitting close to me. Thus, the red ink which was part of the vision materialized externally and became visible. Many other such manifestations have been witnessed which it would take too long to relate.””” [Surmah Chashm-e-Aryah, pp. 131–132 footnote, Ruhani Khaza’in, vol. 2, pp. 179–180 footnote](See Also the 2009 online edition of Tadhkirah, see pages 160-163).

“”””Note by Hadrat Mirza Bashir Ahmadra: Maulavi ‘Abdullah of Sannourra had the following statement published in al-Fadl, volume 4, number 24, September 26, 1916 by way of attestation of this event:

It was the month of Ramadan on the 27th day of which was Friday. I had the honour of being in attendance upon the blessed presence. After offering the Fajr Prayer, the Promised Messiah[as], as was his wont, retired into the chamber (i.e., the small room to the east of Masjid Mubarak) and lay down on a cot. Sitting near him, my humble self started massaging his feet as usual. This continued till the sun came out and the chamber was lit up. The Promised Messiahas was lying on his side and his forearm covered his face. I was thinking with great joy how fortunate I was and what a blessed opportunity had been afforded to me by Allah, the Holy and High, that it was the blessed month of Ramadan and it was the blessed 27th day, the blessed period of the last ten days [of Ramadan], a blessed Friday and I was in the company of the blessed personage. I thought to myself how many blessings combined for me that day; it would not be strange if God Almighty were to show me some Sign of the Promised Messiahas. I was deep in these delightful thoughts as I was massaging his foot near the ankle when suddenly I perceived a slight trembling of his body, whereupon he removed his forearm from his face and looked at me. His eyes were wet and were possibly running with tears. He covered up his face again and continued in that posture. When I looked at his ankle I noticed a red drop which was round and had not spread out. I put the tip of my forefinger on the drop and it spread out and it coloured my finger also. I was surprised and the verse passed through my mind: [Arabic] [The colouring of Allah and who is better than Allah in the matter of colouring. (al-Baqarah, 2:139)]

Then I thought that if this was Allah’s colouring may be it had a fragrance. I smelt my finger but there was no fragrance. Then I started massaging his back and observed a few wet red stains on his shirt which made me wonder, and I got up and examined the whole chamber but did not find any red stain anywhere else. I was very puzzled, and resumed massaging his feet. The Promised Messiahas continued lying down with his face covered with his forearm. In a short
while he sat up and then went to the mosque and sat there. My humble self continued massaging his back.

It was then that I asked him: ‘Hudur, where did these red drops fall from?’ At first, he put me off; but on my persisting he related the whole incident as he has set out in detail in his books. Before describing the incident, he expounded to me in detail the matter of beholding God Almighty and the external materialization of elements observed in a vision. He drew upon the experiences of Hadrat Mohy-ud-din Ibn-e- ‘Arabi to make me fully comprehend how perfect
individuals are vouchsafed the experience of the personification of divine attributes of Beauty and Majesty.

Then the Promised Messiahas asked me: ‘Did any drop fall on your clothes?’ I looked at my clothes and answered: ‘There is no drop on me.’ He asked me to look at my cap (which was of white muslin.) I took off my cap and looked at it and saw that there was a drop on it also. I felt very happy that a drop of the divine ink had fallen on me too. I begged the Promised Messiahas persistently to bestow upon me the shirt on which the red drops had fallen.. He agreed on
the condition that I should give a direction in my will that on my death it should be buried along with me. His hesitation in bestowing it upon me was due to his apprehension that after the death of both of us, people might convert it into an object of worship; and he gave it to me after a good deal of discussion between us. It is still with me and bears the red stains exactly as they were then.

This is my true eye-witness testimony! Suffice to say that if I have lied, may I be subject to the warning of: [Curse of Allah be upon the liars.]

Taking Allah as Ever-Present, All-Seeing, I declare on oath in the name of Allah that whatever I have stated is the truth in its entirety. If I have forged a lie I call down upon myself the curse! curse!! curse!!! and wrath! wrath!! wrath!!! of Allah. Humbly, ‘Abdullah of Sannour.”””””

SEERATUL MAHDI. PAGE NO 72 PART I STORY NO 100
“””NARRATED TO ME BY MIAN ABDULLAH SINAURI THAT IT WAS ABOUT MAY JUNE 1884, ONE MORNING AFTER OFFERING FAJAR PRAYER AT MASJID MUBARAK HAZRAT SAHAB (MGAQ) WENT INTO THE ATTACHED BATH ROOM WHICH WAS COLD DUE TO RECENT PLASTER WORK. THERE WAS A CHARPOY AND HAZRAT SAHAB LIED ON IT. I STARTED LEG MASSAGE. SUDDENLY I FOUND A RED SPOT ON HIS SHIN AND SHIRT.  I TOUCHED IT THINKING IT TO BE BLOOD, SNIFFED IT BUT IT WAS NOT PERFUMED .  THEN I ASKED MGAQ WHO TOLD THE WHOLE STORY OF HIS MEETING WITH ALLAH.”””

The scan from Seeratul Mahdi 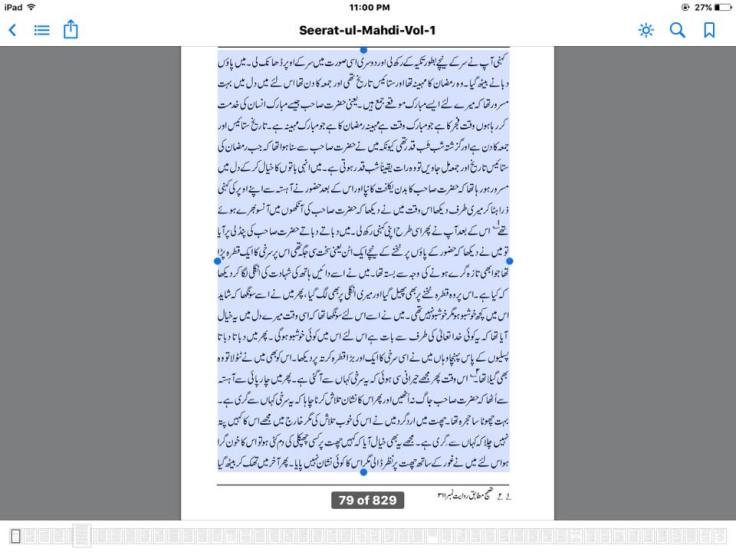 Mujadid e Azim mentions this story in the 1930’s by Dr. Basharat Ahmad (Lahori-Ahmadi), the abridged english version
“””On the eastern extremity of the mosque was another small room in which the Divine sign of the red drops occurred. The floor of this room was about two feet lower than the rest of the mosque and contained the requirements for performing ablution. Later, the floor of the room was raised to the level of the rest of the mosque and this cubbyhole became the office of Maulvi Muhammad Ali. During the summer months, the evening prayers were offered on the roof of the mosque. On the west side of the roof was a balcony in which Hazrat Mirza sat after the early evening (Maghrib) prayers and the congregation would gather around him
for talk and discussions.””” (see page 166-171). 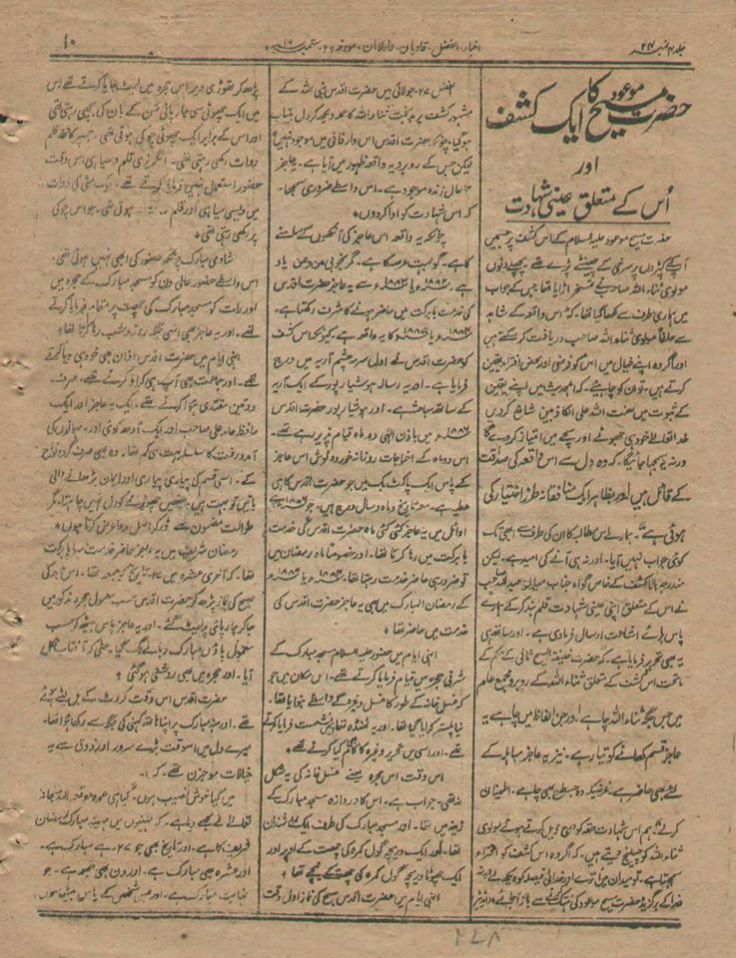