Intro
Nurul-Haqq was a 2-part booklet written by MGA and his team of writers in 1894.  This book is in Arabic only, however, the original also contained an Urdu translation.  This book has never been translated into english (see Hidden Treasures).  On May 18, 1894, Noor-ul-Haq Part-2 was published (see Mujadid e Azim, abridged english edition, page 507).  In Part-1, MGA and his team never even mentioned any hadith about eclipses and etc, in fact, in 15 years as a writer, MGA had never connected the famous prophecy of the Mahdi with any hadith about eclipses.  However, in 1907, in Haqiqatul Wahy, MGA claimed to have predicted the eclipses in Nurul-Haqq Part-1, pages 35-38.  This is the same book wherein MGA’s team wrote Lanaat 1000 times.

Summary of this quote:
MGA is talking about “wudhu” (ablution) in the start and the philosophy that either sins can be forgiven by “wudhu” or not.  While talking about “wudhu” he forgets to mention the forehead, while he mentions that “wudhu” is only cleaning of face, feet and hands. The cleaning (massah) of forehead is a obligatory part which MGA didn’t mentioned . He specifically used the word “only”. In urdu, it would be “SIRF”. 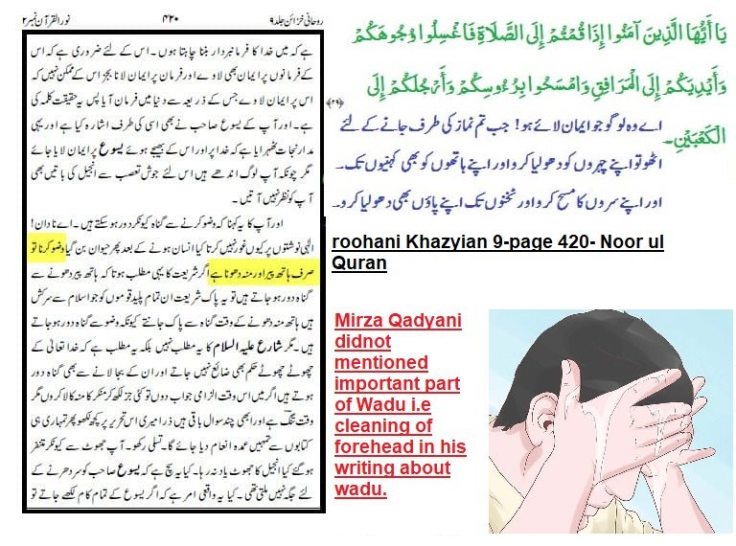