Before he claimed prophethood, Mirza Ghulam Ahmad said that ANYONE can become a Prophet (1899)

Intro
MGA quietly claimed prophetood in November of 1901. He published the famous announcement called “Eik Ghalti Ka Izala”, which eventually turned into a small booklet. About a year later, a book which was 99% written in 1899, was also published, its the famous publishing case of “Tiryaq ul Qulub”, this book would be discussed in the split of 1914 and subsequent polemics between the Lahori and Qadiani-Ahmadi’s. Nevertheless, in Tiryaq ul Qulub, MGA gives some weird story wherein he argues that ANYONE can become a Prophet, even a person with the worst morals. Interestingly, in September of 1898, MGA claimed that in the time of the Messiah, women will also get Ilham’s and children will even get prophethood, which was a total lie, nevertheless, MGA seems to have been laying the ground work for his eventual claim of prophethood.

The Quote typed out
“””For example a choora (low caste) of some nation, meaning some drunkard who has served the pious Muslims of some town for 30-40 years, and also cleaned their dirty sewers, and wiped out the filth from their toilets, and has even been caught stealing 2-3 times and has been caught committing ZINA (sex outside of marriage) a few times, and has been exposed thoroughly and even got locked up and went to prison for some years and even got beat up by the elders of his town for his wild acts and even his mother including his paternal and maternal grandmothers have been involved in such filthy acts as well, and they have all been eating out of he Murdar (animals not slaughtered via the name of Allah) and they all life the excrements of other people. After all of this, it is still possible that after turning to GOD and repenting from his acts, and becomes Muslim again, it is also possible that God out of his grace turns him into a Rasul and a Nabi”””. 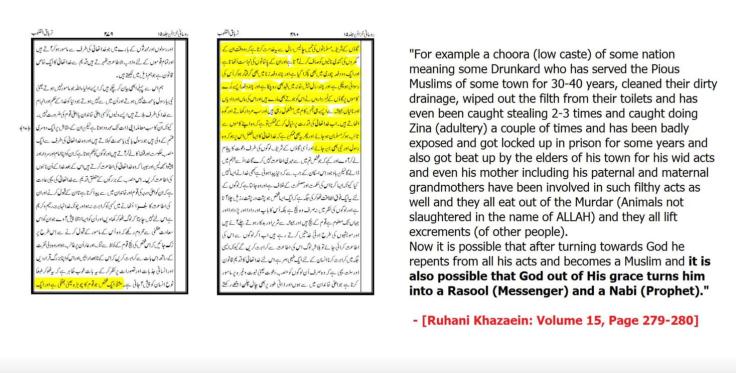 3 thoughts on “Before he claimed prophethood, Mirza Ghulam Ahmad said that ANYONE can become a Prophet (1899)”