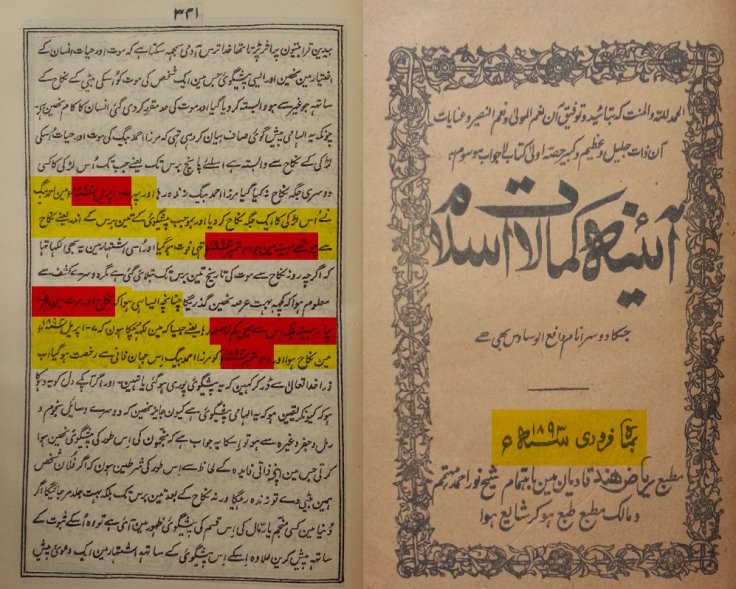 “””When the Muslims of our time affirm the death of the Holy Prophet (peace and blessings of Allah be upon him) and his burial on earth, and at the same time affirm that Jesus is still alive, they furnish the Christians with a written acknowledgement that Jesus possessed qualities different from those of the common man and also different from all the Prophets. If it were true that while the Best of Mankind (peace and blessings of Allah be upon him), who appeared six hundred years after Jesus, died after a brief life thirteen hundred years ago, yet Jesus has not yet died, would it not prove that Jesus possesses qualities that are superhuman? Though the Muslim divines of these times formally reject every form of association of partners with God, yet they lend their full support to those who are guilty of such association. It is an outrage that while Allah the Glorious, in His Holy Word, proclaims the death of Jesus, these divines create countless
difficulties in the way of Islam by adhering to the notion that he is still alive. They acknowledge Jesus as ever living and self-subsisting in heaven, and affirm the death and burial upon earth of the Chief of the Prophets (peace and blessings of Allah be upon him)! The Holy Qur’an records the testimony of Jesus to the effect:

“”There was much theological discussion between the Sahaba, to the extent that, for example, Hazrat Ibn Abbas had a different opinion on as many as 50 matters… …but no one called each other a Kafir.” 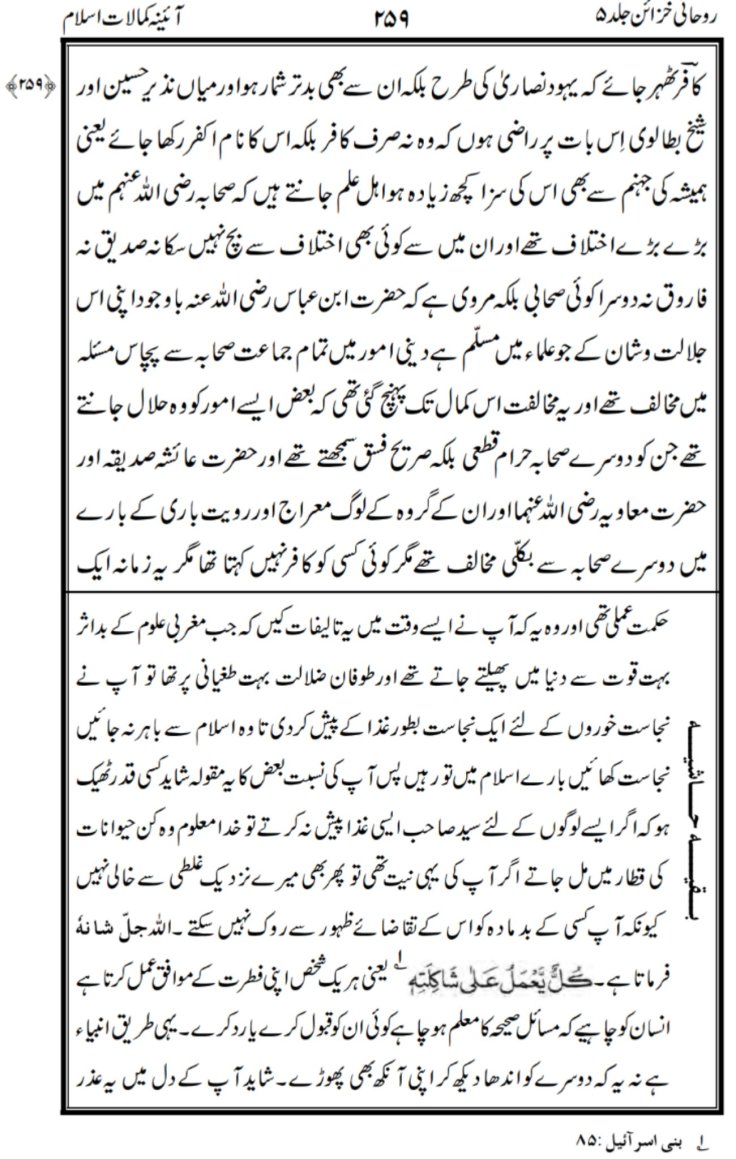 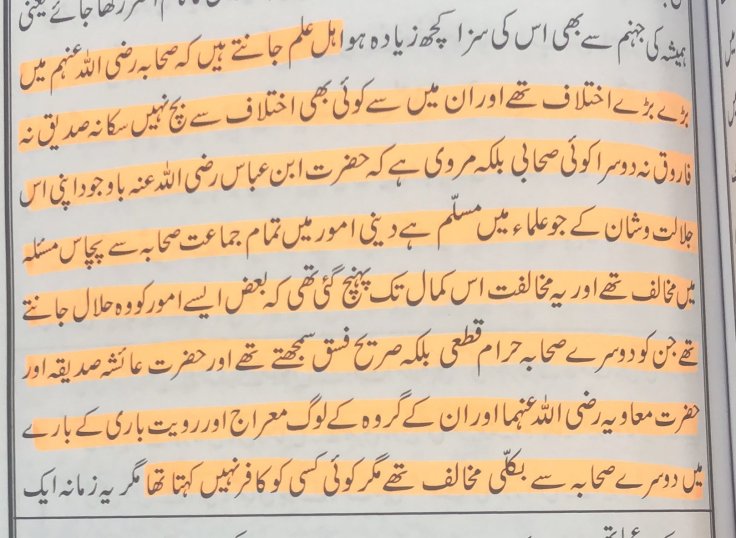 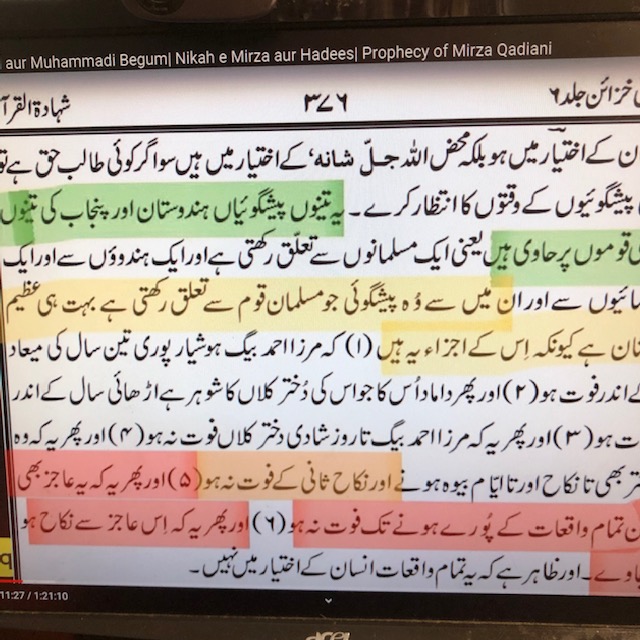 (A) Allah observed that my cousins and near relatives were committed to ruinous courses…and that they denied the existence of God and were wicked people…. Allah saw that they incited people to vice and forbade good…and did not refrain from speaking ill of the Holy Prophet, peace and the blessings of Allah be upon him, but persisted in it…. While they were in this condition Allah chose me for the revival of His faith…and provided me handsomely with inspiration and verbal revelation and communications and visions… whereupon they rebelled and mockingly demanded Signs  and said: ‘We have no knowledge of any God Who speaks to anyone…so let him produce a Sign if he is truthful…’ In this way they advanced daily in their error and their arrogance till they decided to propagate their evil thoughts and to mislead the ignorant ones with their delusions. They have published a document in which they have abused the Holy Prophet, peace and blessings of Allah be upon him, and have abused the Word of Allah and have denied the existence of God, hallowed be His name. Along with this they have demanded Signs in support of my truthfulness and have demanded proof of the existence of God Almighty. They have published this document widely in all quarters and have thus helped all the non-Muslims of India against Islam and have transgressed greatly, the equal of which has not been heard of even about the Pharaohs…. When this document of theirs, which was prepared by the biggest of them in evil as well as in age, reached me…I found it full of phrases whereby the heavens might be rent asunder…. Thereupon, I bolted my doors and supplicated
my Lord, the Bountiful, prostrating myself before Him and…saying: My Lord, my Lord, help Your servant and humiliate Your enemies. Respond to me O Lord, respond to me. How long will they mock You and Your Messenger, how long will they call Your Book false and will abuse Your Messenger? I beseech You of Your mercy, O Hayy [the Ever-Living], Qayyum [the Self Subsisting], Mo‘in [the Helper].

Then Allah had mercy on me in consequence of my weeping, my sighing, and my tears and He called me and said:

[Arabic] I have observed their disobedience and their transgression, I shall soon afflict them with various types of misfortunes and shall wipe them out from under the heavens. You will soon see how I shall deal with them and I have power to do all that I might will. I shall make their women widows, and their children orphans, and their houses ruins, so that they might taste that which they have said and they have earned. But I shall not destroy them suddenly at one swoop, but stage by stage, so that they might have a chance of turning back and repenting. My curse will descend upon them and upon their homes and upon their little ones and their big ones and their women and their men and their guests who will enter their doors. All of them will be accursed except those who believe and act righteously and cut off their relations with them and keep off from their gatherings. Those will be the recipients of My mercy.

This is the substance of what my Lord has revealed to me.  So I conveyed the messages of my Lord to them, but they felt no fear and did not affirm the truth. Instead, they increased in their rebellion and denial, and went on mocking like the enemies of the faith. Then my Lord
addressed me and said:

We shall show them Signs which will cause them to weep and shall send down upon them strange afflictions and extraordinary diseases and shall make their lives a misery and shall
pile up afflictions upon them and no one will be able to help them.

“””I have been informed of matters which had never entered my mind nor did I know anything about them. At such a time God directed me through revelation that I should seek the hand of his elder daughter in marriage and should tell him that he should first establish this relationship with me and should thereby seek light from my light. I was also directed to tell him that I had been commanded to let him have the land which he had asked for and even some more and to show benevolence towards him in many ways, provided he would agree to the marriage of his elder daughter to me. This would be a covenant between us and if he agreed to it he would find me a good party to it; but if he did not agree to it I was to warn him that I had been informed by God that her marriage to anyone else would not prove blessed for the person she marries nor for her father. If he did not comply with my request he would be afflicted with misfortunes culminating in his death. He would die within three years of the marriage [of his daughter].  Indeed, his death might occur earlier at a time when he is unaware. So also the husband of that girl would die within two and a half years of the marriage. This is a divine decree and you can act as you might choose, I have warned you….Then, I wrote to him under divine direction and as indicated by my Gracious God…‘I am writing this letter to you under divine direction and not of my own accord, so make this letter secure in your box for this is from one true and faithful and God knows that I am entirely truthful in this matter and the promise I have made has been made by God’s direction and not on my own. It is Allah Who has made me speak under His revelation.’”””
_____________________________________________________________________________________________
[A’ina-e-Kamalat-e-Islam, (At-Tabligh), pp. 577–578, Ruhani Khaza’in, vol. 5, pp. 577–578](see also, the 2009 english edition of Tadhkirah)

“””ON 7 December 1894, I saw a dream that I have become Hazrat Ali KaramAllah wajhu and come to know that I am him.it is the wonders of dream that a man adopts the person of another one. So at that point of time I thought myself to be Ali Almurtaza. The situation I was in, is that a group of Kharijis, is resisting in to my Khilafat. Meaning thereby that this group wants to stop my Khilafat and creating insurgency against me. Then I see holy prophet peace be upon him saying to me Ya Ali keep away from them and their farms.””” 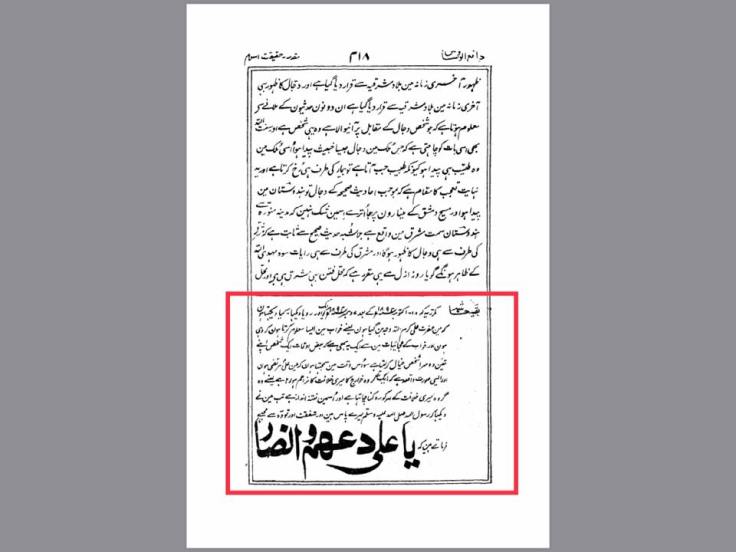 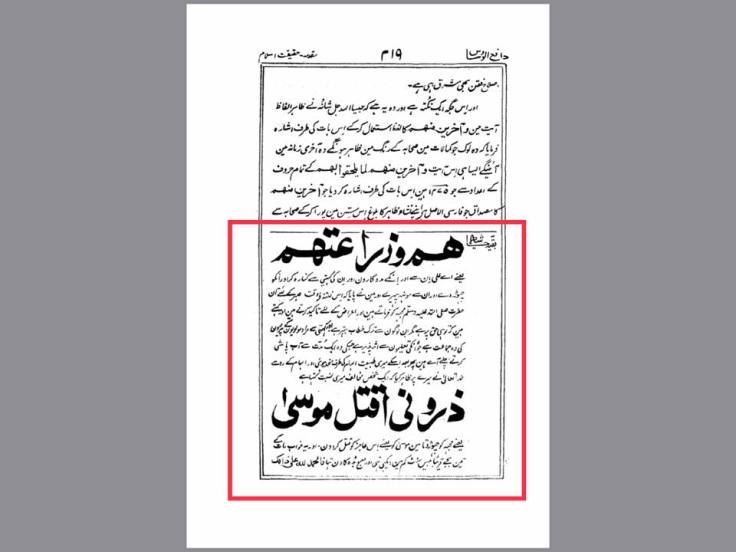 In 1893, Mirza Ghulam Ahmad made 6 predictions about Muhammadi Begum

Who is Mirza Ahmad Baig Hoshiarpuri?