Ahmadiyya leadership began twisting the Quranic verse in 2:4 in 1915

Intro
Dear readers, as we all know, Ahmadiyya leadership and specifically Mirza Basheer-uddin Mahmud Ahmad began twisting additional verses of the Quran after the split of 1914. These verses had to do with the continuation of prophethood. It should be noted that MGA quoted Chapter 2:1–7 in the Barahin-i-Ahmadiyya Vol. 3, however, he didn’t comment specifically on 2:4 (2:5 in the Ahmadi Quran). It was in 1915, with the publishing of the Khalifa’s 2 books, “Qaul al-Fasl” and “Haqiqatun Nubuwat” wherein additional verses of the Quran were used to argue for the prophethood of MGA. In these books, they used 1:6 and connected it with 4:69 (4:70 in the Qadiani Quran)(as MGA did in 1906), as they argued that any Muslim could become a prophet. They were indirectly arguing that prophethood in the Muslim ummah could be achieved, which is against the quran. They also presented 7:35, 62:3 2:4, and 61:6. They even published an english commentary of the Quran in 1915, wherein they translated and commentated on 1:6 and 2:4 and presented MGA’s prophethood as inevitable. Watch a video where by Imam Noman Ali Khan, wherein he briefly discusses the #ahmadiya deception on 2:4. We have collected all the instances of the phrase Unzila herein, feel free to read it.

This cannot be allowed to pass unchallenged. Why did the Qadiani Jamaat argue for decades that “al-akhirat” here means “the revelation which is yet to come”.

Read the following page in the 5-volume English commentary of Malik Ghulam Farid:

Read starting from 2nd column, para beginning: “The word al-akhirat (what is yet to come)”. He says that al-akhirat here means the coming of the Promised Messiah.

The Qadiani Jamaat even concocted a story which attributed this explanation to the Promised Messiah. Read it here on the Qadiani Jamaat website, starting at the words: “Aaj meray dil mein yeh khiyal paida hua” (“Today it occurred to me …”).

According to this concocted report, first published in 1915, the Promised Messiah said that Al-Akhirat in this verse means the revelation that was to come after the Holy Prophet Muhammad.

After doing all this for decades, they should explain why they were wrong before, and what made them change to the traditional Muslim understanding of this word in this verse.

[Please note I am confident this was NOT the original translation by Maulawi Sher Ali sahib. If some Qadiani challenges me, then I will give my reason].

Qadianis change meaning of “akhirat” in Ch. 2, v. 4 to prove prophets can come

Here is the link to Tafsir-i Saghir of Mirza Mahmud Ahmad’s time on the Qadiani Jamaat website.

Here is the scanned image of the same page from the 1994 edition of this book, the Mirza Tahir Ahmad edition. You can see the change to “Akhirat” in the translation, and the former translation in the footnote.

In 2002, in Malik Ghulam Farid’s short commentary of the Quran, he writes that this verse has secondary meanings, and connects it to 62:3, and the second coming of Muhammad (Saw)(nauzobillah). 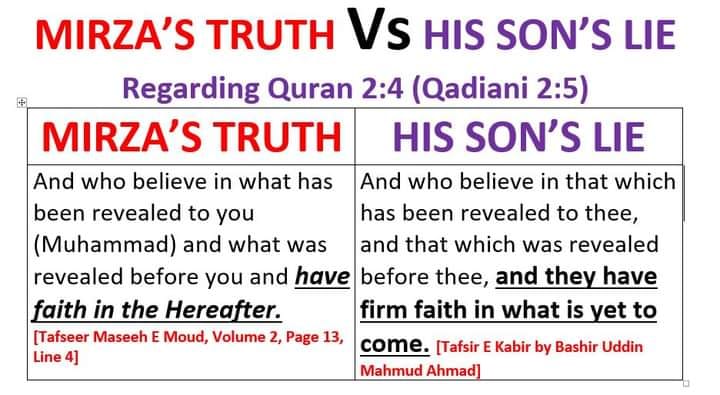 However, Ahmadiyya leadership began twisting the word-for-word translation of this verse in 1915 as:

“”””And who believe in that which has been revealed to thee, and that which was revealed before thee, and they have firm faith in what is yet to come””” ((((See the official 5-volume commentary of the Quran here: https://www.alislam.org/quran/view/?page=34&region=E1&CR=)))) 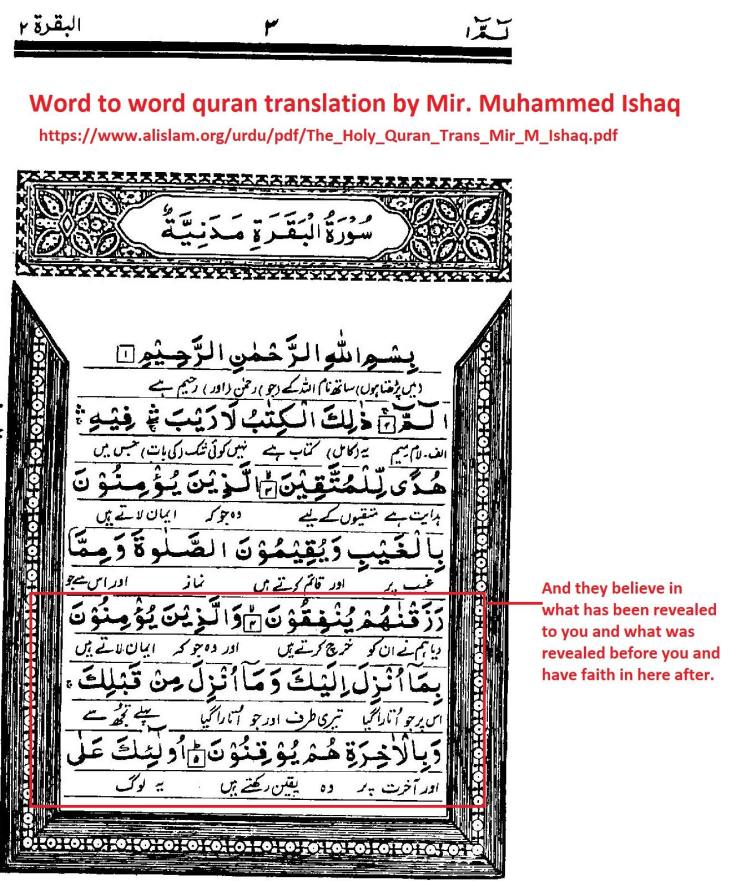 The word الآخرة is derived from the trilateral root اخر (a-kh-r). Other derived words from this root besides “hereafter” are “last”, “other”, “next”, “second” or “to delay”. This word, unlike the first one, appears in the Qur’an with different prefixes. The list counts the basic form الآخرة separately.

The arabic phrase “Unzila” in 2:4 of the Quran, fully explained

Ahmadiyya and 4:69, everything you need to know

Ahmadiyya leadership began twisting the Quranic verse in 2:4 in 1915

Ahmadis lie about 7:35 of the Quran

#Ahmadis believe that 62:3 of the Quran announces that Mirza Ghulam Ahmad is the second coming of Muhammad (saw)(Nauzobillah)

The Qadiani-Ahmadi’s declared that MGA was “Ismuhu-Ahmad” in Quran 61:6, not Muhammad (Saw), then changed it later

From 1901 to roughly 1922 Ahmadis believed MGA=Muhammad

“”Prophethood among the Followers of Muhammad”” by Maulana Sayyid Muhammad Ahsan of Amroha, Oct-1913, in Tashhizul Azhan

An Ahmadi claimed prophethood in late-1901 or early 1902, and was boycotted by Ahmadis–Chiragh Din of Jammu (Jamooni)

What is ARBA‘IN? A book by MGA and his team of writers

In 1891, when MGA made his big claims, he denied prophethood–Mufti Sadiq was heavily involved

Mirza Ghulam Ahmad was considered a Kafir in 1884, before his wildest claims

Some rare books from the 1901-1902 era, which refute MGA’s claim to prophethood

Do Ahmadis believe in the same Kalima as Muslims?

17 thoughts on “Ahmadiyya leadership began twisting the Quranic verse in 2:4 in 1915”