Mirza Sultan Muhammad and his wife Muhammadi Begum lived and died as Muslims, they had 5 sons, and 2 daughters

Molana Manzoor Ahmad Chinioti (1931-2004), was a religious scholar and has been a member parliament in Punjab Assembly. He has great services in the field of religious studies and Khatme Nabuwwat. He is the author of many books on the subject of Khatme Nabuwwat. He had a meeting with Muhammadi Begum, the sign of failed prophesy of Mirza Qadiani. It may be recalled here that Mirza Qadiani had prophesied that Muhammadi Begum would come to his Nikah virgin or divorced.

He wrote about this in the book Paigham Hidyat which has been summarised as under:-
“In June 1965, I along-with Molana Abdullah Ludhianvi Khateeb Jamia Masjid Ghalla Mandi Toba Tek Singh, went to Chak Shahzadian wala District Burewala, to see Muhammadi Begum, who was residing at that place with her eldest son Mirza Ishaq.

The husband of Muhammadi Begum, Mirza Sultan Muhammad migrated to this place from Patti India after partition in 1947. He was allotted 4 Murabba Land (100Acres) by the government. This land was managed by Mirza Ishaq.

It was known that Mirza Ishaq, the son of Muhammadi Begum had converted to Qadianiat due to the enticement of wealth and marriage with Qadiani Girl by the Qadianis, in 1930. The imam of local Masjid and residents of village told that Muhammadi Begum hated her son Mirza Ishaq for getting converted to Qadianiat and never ate food cooked by his wife as long as she was healthy enough to do cooking herself.

Since Muhammaadi Begum was at the last phase of her life at that time, Someone told that Qadianis are planning to take Muhammadi Begum to Rabwah and bury her after death to tell the world that Muhammadi Begum was converted to Ahmadiyya to fulfil the prophesy of Mirza Qadiani.

The Local Masjid Imam accompanied us to the house of Mirza Ishaq. We got seated in the DERA a place outside the house for guests. While we were having an introductory chat with the peoples in Dera, Mirza Ishaq, a tall sturdy man holding a DAANG, (long round baton) and a large utensil on the head, has arrived. He had a loud and heavy voice, after salutation he said Molvi What is it that you are here for ?

I said I wanted to know the address of your brother Asif Sultan. But why do u want to see him, if u need some information from him that U can have better from me. I said you are right, in fact I am here to have some information. Then he start speaking he said he became Ahmadi in 1930 and both his father and mother are non ahmadis.

Referring to the failed prophesy of Mirza upon his mother, father and maternal grand father, I asked him as to why he became Ahmadi, when the living evidence of lies of Mirza Qadiani is present at your home, to which he could not reply convincingly. However, he said it is like Pheri walla (a mobile shopkeeper in the village), comes to sell his goods and raises his voice whomsoever like to purchase goods of his choice does so. Similarly Mirza sahib Qadiani came he raised a voice that he was Mujaddid Masih and Mahdi of 14th century , this voice appealed to him and he accepted it. Then Mirza Ishaq said ok make me a muslim if you can. Then the talk continued on the claims of Mirza Qadiani in a friendly manners like Mirza writing the months of Safar as the fourth month and Mirza,s claim that his son talked to him in the womb of mother.

Then I enquired him of the health of his mother , he said she has grown older, uses power glasses and listens to louder voice. Few days ago she had a fall injuring her face. Finding him a little softened, I said Mirza Sahib your mother is like my mother and I want to make Ziarah of her and to meet her personally.

He immediately declined to this request saying he has not even allowed an Ahmadi to see her. However, my constant flattery and requests made him change the decision and he said let me get the other ladies of house take aside. After a while he called us inside.

We entered the house to find Muhammadi Begum sitting on a large Palang (a desi bed). We sat on cain wood seats placed around. Respected lady would be at her 90s. Wrinkled face, with spectacle of thick powered glasses a wound mark on a side of face was visible. She had a graceful personality. Her son Mirza Ishaq coming close to her ear said “BAY BAY AEH GHAIR AHMADI MOLVI TUHADI ZIARAT WASTE AYE NE meaning mom these Non Ahmadi Molvis have come to see you. She got happy to listen to this and asked “GHAIR AHMADI NER” they non Ahmadis ? He replied yes non Ahmadis, She smiled and said ok. I had certain questions to ask from her which could not be asked for many reasons. After sometime we requested her to pray for us which was communicated by Mirza Ishaq to her. She raised her arm to place her hand on our heads and prayed for us. Subsequently, we sought permission to depart Mirza Ishaq Again took his mouth near her ear and said BAY BAY ayh ijazat mang de ne. After few moments She replied IJAZAT HAI. We, then said salam and left the house. “

After that Molana wrote to her four sons in Lahore, requesting them not to allow Qadianis to take their mother to Rabwah. Molana received a reply from her son in law Said Muhammad Baig from Khanqah Dogran one letter from four Muslim sons of Muhammadi Begum duly signed by all four. which are as under:-

Your letter addressed to Akhtar Sultan reached to my son who was proceeding on leave to village. Since I have read your letter, it is my duty to reply to you to clarify the situation. This humble self states on oath that he is the son in law of late Sultan Muhammad and Muhammadi Begum and is a close relative to them. They have two daughters out of which one has been married to me. The other one was married to the nephew of Mirza Sultan Muhammad. Both Muhammadi Begum and Mirza Sultan Muhammad belonged to Ahlussannah wal jamaat. Mirzai party did their best to get Mirza Sultan sahib and Muhammadi Begum Sahibah to get to their side but could not succeed. Please do visit us my village Khanqah Dogran sharif lies on Sargodha Lahore road. My mother in law is seriously ill nowadays. Her four sons are in govt service at Lahore. One Mirza Ishaq has accepted Mirzaiyyat due to greed and he is also married in a mirzai family. Rest four namely Muhammad Asif Baig, Muhammad Ashraf Baig, Akbar Baig, and Akhtar Sultan are muslims of Ahlussannah waljamaat. They are in Govt service and reside in Choburji Quarter No.11A. You can meet them at 3 o clock at evening.

Your misaddressed letter finally reached to us. We would like to confirm here on oath that our mother Mohtarma Muhammadi Begum Sahiba is a muslim by the grace of Allah and believes in his holy prophet Muhammad Sallallaho Alaihe wasallam to be the last of the prophets. She is steadfast on the Muhammadan religion and will continue to believe so for ever inshaAllah. She belongs to the ahlussunnah waljamaat school of thought. She has nothing to do with Mirzaiyyat. We pray that Allah swt keep her on this right path. Please join us in our prayers. WASSALAM

Muhammad Asif Baig, Muhammad Ashraf Baig, Akbar Baig, Akhtar Sultan.
Note. This letter is in response to your letter and may not be published without permission, we are retaining a copy with us.

Muhammadi Begum died on 19 November, 1966, at Lahore, her funeral prayer was led by Molana Shahabuddin of Chowburji who was a disciple of Shaikhul Hind Molana Mahmoodul Hasan. She was buried in Qabrustan Miyani Sahib Lahore. 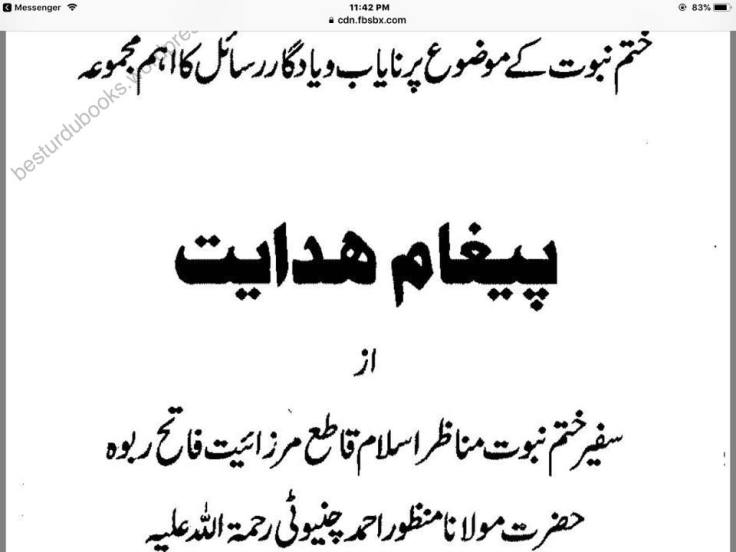 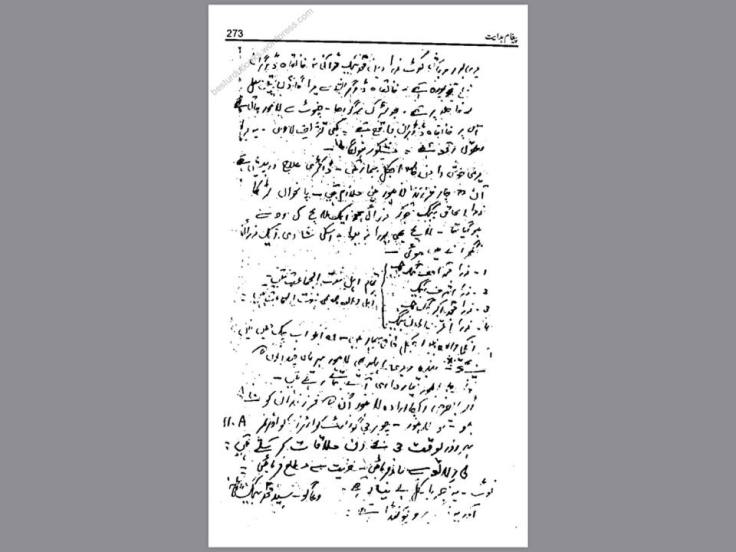 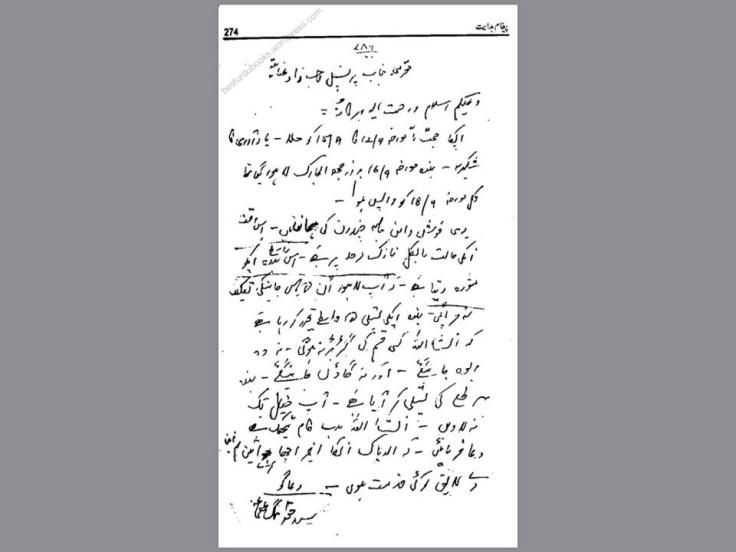 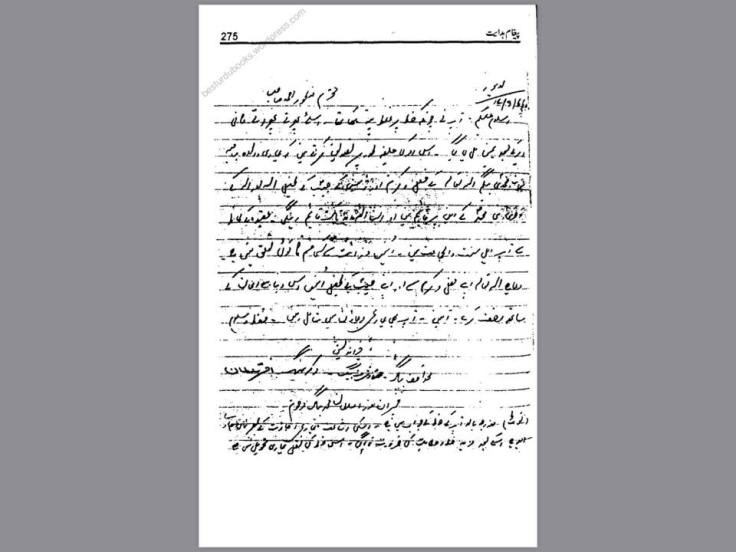 Mirza Sultan Muhammad and his wife Muhammadi Begum lived and died as Muslims, they had 5 sons, and 2 daughters

In terms of Muhammadi Begum, Mirza Ghulam Ahmad was guaranteeing that she would eventually (TAQDIR E MUBRA) be married to him

28 thoughts on “Mirza Sultan Muhammad and his wife Muhammadi Begum lived and died as Muslims, they had 5 sons, and 2 daughters”