He resigned to study law at University College, London in 1923. Martin qualified as a lawyer in 1926, becoming the second Muslim lawyer in the country after Basil Agusto. He moved back to Nigeria in this state.

Martin was attracted to the movement partly because of movement’s positive attitude towards acquiring western education. He later played a prominent role within the local branch, he was vice president of the movement in 1927 and was a member of the first Board of Trustees.

Jibril Martin shows up in the February-1928 edition of the ROR. 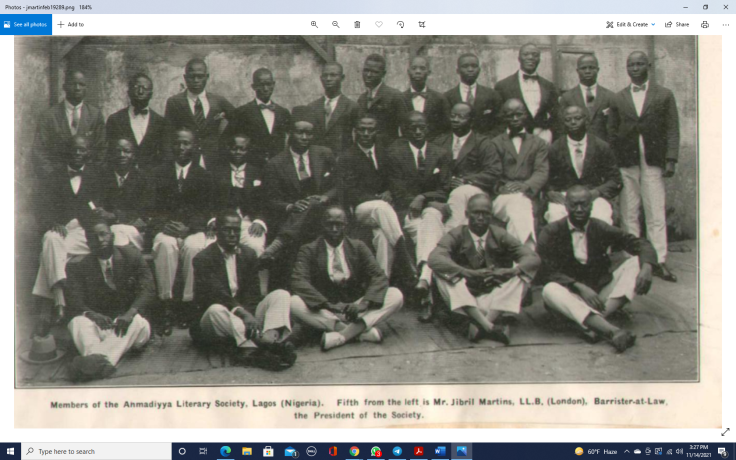 In December of 1939, the problem of loyalty to the Khalifa at Qadian was so bad, Hakim Fadl-ur-Rahman was ordered by the Khalifa to force all Ahmadi’s to renew their bait (See Fisher). The majority of Ahmadi’s refused.

Extract of the Judgment Reads:-
In the West African Court of Appeal holding at Lagos, Nigeria on Saturday, the 7th day of May 1949 before their honours.

Judgement
This is an appeal from a decision, giving in the Supreme Court of Nigeria at Ibadan, by Jibowu J. The appellants, who were the plaintiffs at first instance, failed in their claim for the Exclusive possession of certain premises, known as the Ahmadiyya Mosque at Ife. Their claim was founded upon the contentions that the Mosque is the property of a religious community, of which they are members, within he faith of Islam and that they are lawfully appointed trustees of the Mosque. In the year 1916 there came into existence in Nigeria a branch of a religious movement known as the Sadr-Anjuman-Ahmadiyya, which movement has its Headquarter at Qadian in India and owes spiritual allegiance to one Hazrat Mirza Bashirud-Din Mahmud Ahmad, known as His Holiness the Khalifatul Masih. The appellants and the respondents were members of this movement and of its branch in Nigeria.

In 1938 the Mosque was acquired by the movement unhappy difference into which it is not necessary to go arose within the Nigerian branch of the movement with the result that on the 29th of December 1939, the Khalifatul, through the first respondent as his agent in Nigeria, withdrew his recognition of certain members of the movement, among whom were the appellants. The appellants, however, continued to regard themselves bound by the tenants of the movement in all respects except one; they no longer regarded the Khalifatul as their religious leader.

It was argued both here and in the court below that the applicants, by superimposing a new constitution, had withdraw from the parent movement and the learned trial judge, in a long and careful judgment held that this was so. I see no reason to disturb his findings of fact, which are borne out by the terms of the 1943 constitution, in which it is worthy of note, the appellants ascribed a new name (that of Ahmadiyya movement-in-Islam) to the movement. The learned trial judge held that the appellants, by their own acts, seceded from the movement of which they were once members and that they were not entitled, by reason of their secession, to the property of the movement.

This, in my view was the correct decision; this appeal should be dismissed, with costs in favour of the respondents in the sum of £42:4:6d.
(Sgg) C.T. ABBOTT
Puisne Judge, Nigeria
I concur (Sgd) H.W.B. BLACKALL, PRESIDENT
I concur (sgd) HOHN VERITY
CHIEF, JUSTICE, Nigeria.
Certified True Copy
(Sgd) E.A. Bamgboye,
Acting Deputy Registrar,
West African Court of Appeal,
Paid 5/6d on CR. 157522/40/17.549

After the judgment the Jama’at started on a new platform at the present place No. 10 Iremo Road Ile-ife and the other side that seceded established their own mosque at Ilare Area of Ile-Ife under their new name Ahmadiyya movement in Islam. The other party retained Sadr-Anjuman Ahmadiyya.

Missionaries were always posted to Ife regularly including Central Missionaries. All the auxiliaries bodies of the Jamaat were fully established. These are, Lajna Imaillah, Khuddamul, Nasrat, Atfal and Majlis Ansarullah.

We shouldn’t forget the activities worthy of emulation of three of our leaders in Ife Jama’at. Alfa A.R.A. Oluwa who donated the whole of iron sheet meant for his proposed building in Ile-Ife to Roof the Mosque. Brother B.A. Okeleye who donated the present praying mates to the Mosque in seventies which we still use presently and (3) Alfa Jihmoh Abdul Salami (a.k.a. SELEM) who came from Abeokuta and actively participate in Tabligh Activities in Ife land and later asked the Jama’at to bury him in Ife if he dies, He was buried behind the central Mosque in Ife according to his wishes.

Ahmadiyya College, which name was changed to Anwar-ul Islam College in 1976 shortly before Alhaji Gbadamosi was redeployed to Jubril Martins Memorial Secondary School at Iponri as principal. He swapped places with Alhaji Balogun, who was brought to Agege. Alhaji Gbadamosi had succeeded Alhaji Folami at Agege in 1960. Of the trio, only Alhaji Gbadamosi aka Oga is still alive today. He was 91 on March 18. The story of ACA is one of struggle and determination. It started off at 4, 6 and 8, Olushi Street, Lagos Island, on April 5, 1948. Houses 4 and 6 were donated to the school by Alhaji Martins and Alhaji Kenku; House 8 belonged to the Movement.

Who is Humphrey J. Fisher? The writer who wrote extensively about Ahmadiyya in Africa

‘Early History of Ahmadiyya in Ghana” by Haneef Keelson

Who is Farimang Mamadi Singhateh? The Governor General of the Gambia (1970’s) and an Ahmadi

Who is Ghulam Nabi Gilkar?

Who is Farimang Mamadi Singhateh? The Governor General of the Gambia (1970’s) and an Ahmadi

Who is Humphrey J. Fisher? The writer who wrote extensively about Ahmadiyya in Africa

Trimingham, J. Spencer “The Influence of Islam Upon Africa” (1968)

21 thoughts on “Who is Jibril Martin (1888-1959)? The Ahmadi in Nigeria who rejected the Qadiani Khilafat and created the 5th sect of #ahmadis”