Intro
17 October 1817 – 27 March 1898), commonly known as Sir Syed Ahmad Khan (also Sayyid Ahmad Khan). He seems to have been a member of the growing Ahl-e-hadith movement in Northern India. However, by the 1860’s, he was a hybrid version of a Quranist.

The Tafseer (commentary) was originally published, probably in parts, in the 1880’s. It does not cover the entire Quraan; it only goes up to Chapter 17, Soorah Banee Israa-eel. Sir Sayyad died
before he was able to complete the work. Chiragh Ali was a student or colleague of Sir Syed and was publishing similar material from Aligarh. Read a thorough review on this Tafsir herein, they claim that an english version is available at the Khuda Baksh Library.

The order of publishing is as follows:

In this Tafseer, Sir Syed Ahmad Khan denied the physicality of the Miraaj, the concept of the Mahdi, the death of Eisa (as), the denial of Jinn, the denial that Adam (As) was the first human and etc etc. 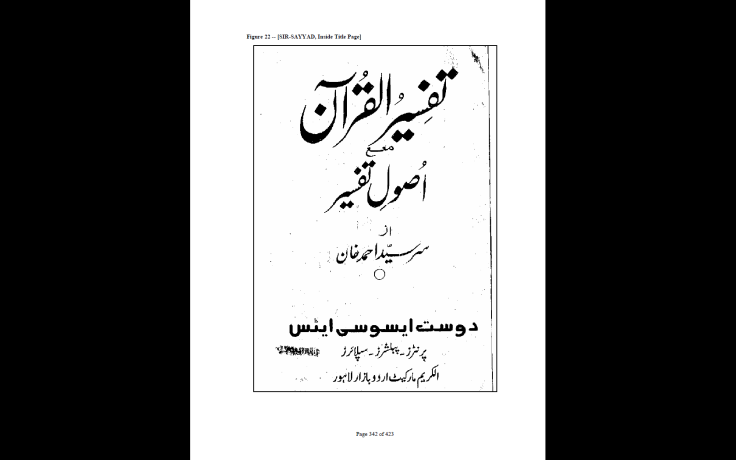 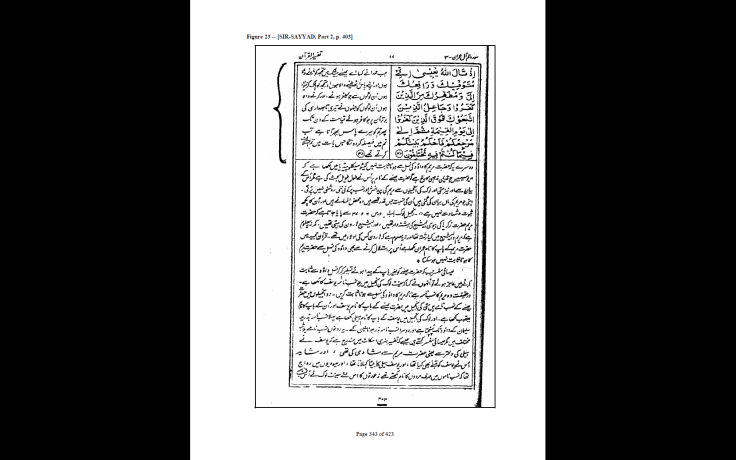 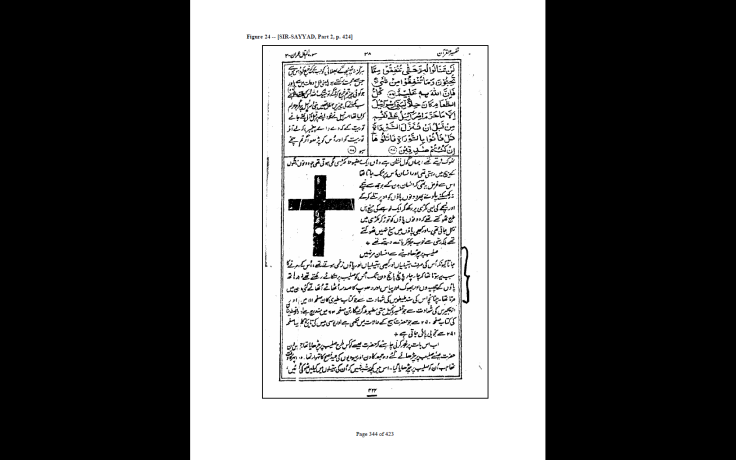 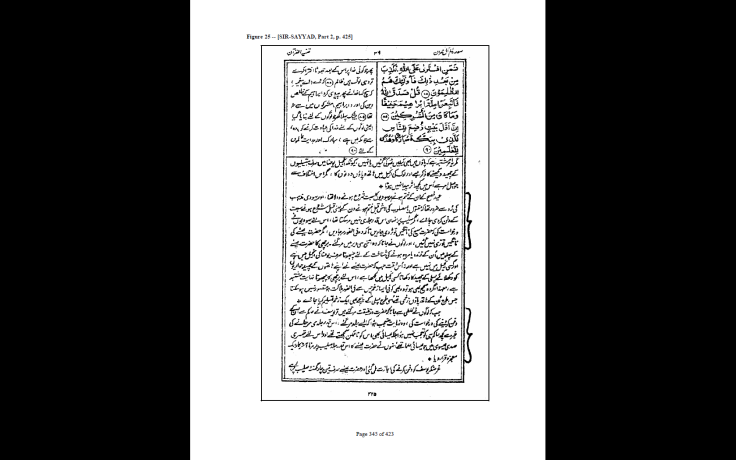 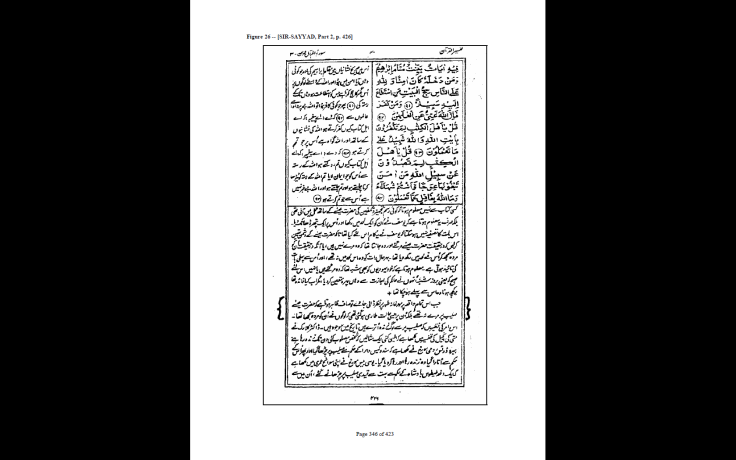 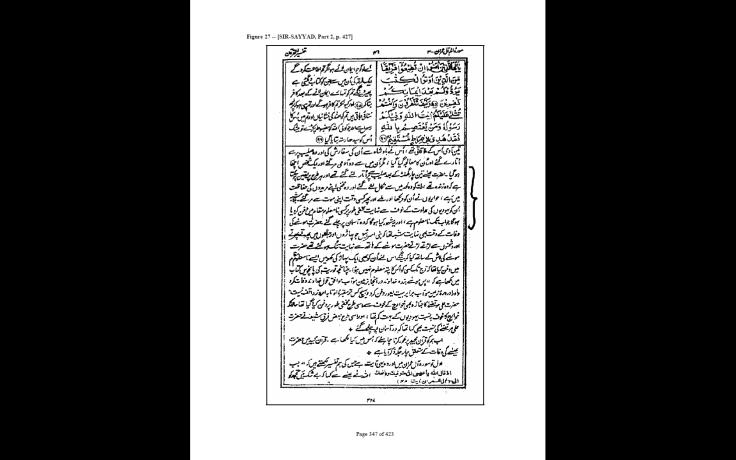 Now I provide my English translation of Sir Sayyad’s Urdu translation of Quraan 3:56 and some excerpts from his commentary on this verse, shown in the original Urdu text in the page images above.

[Commentary on 3:56:] …
A person does not die due to being put on a cross because only the palms of his hands, and sometimes the palms and feet, got wounded. The reason for death used to be that [the person] was kept hanging on the cross for four or five days and [due to] the holes in his hands and feet and by suffering the impact of hunger and thirst and the heat and glare of the sun, [he] used to die in several days. … [SIR-SAYYAD, Part 2, p. 424] …

Upon the end of the day of the Fasah festival [the Pesach or Passover festival96], the Jewish Sabbath was about to begin and, according to the Jewish religion, it was necessary that the corpse of the killed or crucified person be buried prior to the end of the day, that is, prior to the start of the Sabbath. But a person cannot die so soon on the cross. Therefore, the Jews requested that Hadrat Maseeh’s legs be broken so that he would die immediately but Hadrat `Eesaa’s legs were not broken and people thought that he died within that much time [i.e., within the short time]. …

When people erroneously thought that Hadrat `Eesaa has actually died, then Yoosuf [Joseph of
Arimathea] requested the governor [Pilate] to have him buried; he [Pilate] was very astonished that he [Jesus] had died so quickly. The report of [Jesus] having died so quickly not only caused astonishment to the governor but the Christians too used to consider it impossible and, therefore, in the 3rd Christian century [i.e., 3rd century AD] the Christian scholars [of that period] eventually declared Hadrat `Eesaa’s swift death on the cross to be a miracle. [SIR-SAYYAD, Part 2, p. 425] ……

Upon taking a historical view of this whole incident [of Jesus’ crucifixion] it clearly becomes
obvious that Hadrat `Eesaa had not died on the cross; rather, he went into a condition such that people thought him to be dead. … Hadrat `Eesaa was taken down from the cross after three or four hours and one can be sure in every respect that he was alive. At night he was taken out of the grave and he stayed hidden in the protection of his disciples. The disciples saw him and met him and then, at some [later] time, [he] died a natural death. Without a doubt, due to fear of the enmity of the Jews, he must have been buried, in extreme secrecy, at some unknown location, which is unknown up till now and it became publicized [i.e., the word spread] that he had gone to the heavens [or the sky]. [SIR-SAYYAD, Part 2, pp. 426-427] 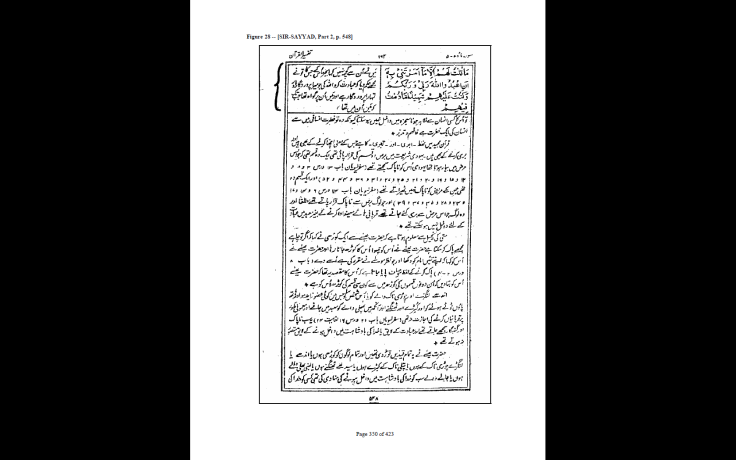 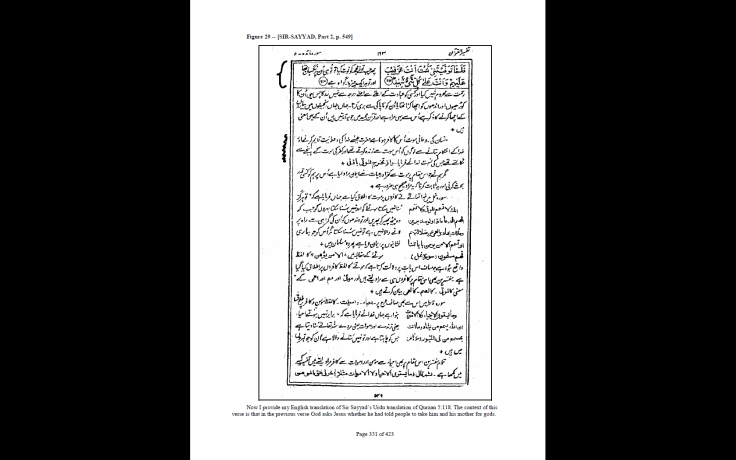 During the writing of Braheen-e-Ahmadiyya, MGA masked his beliefs, he was already asserting that Esa (as) died

Noorudin and Abdul Karim were influenced by Sir Syed

Was Noorudin the Ghost-writer of MGA?

During the writing of Braheen-e-Ahmadiyya, MGA masked his beliefs, he was already asserting that Esa (as) died