According to Mirza Ghulam Ahmad he manifested more than 10,000 miracles and the Prophet (saw) manifested only 3000.

Intro
Mirza Ghulam Ahmad was eventually going to claim law-bearing prophethood, I estimate that he would have done this by 1911, however, he died in 1908. After 1901, he kept comparing himself to Muhammad (saw) (nauzobillah) and also calling himself as Muhammad (saw) (nauzobillah). This is just another piece of evidence which proves exactly where MGA and his team were going with these claims.

MGA claims that if a few of his prophecies fail…its not a big deal
If you read the whole paragraph, of these quotes, he was actually trying to cover up for his failed prophecy of muhammadi begum and said,

”I have shown more than 10,000 signs, so if 1 or 2 prophecies of mine, didn’t manifest themselves properly, then that shouldn’t be a problem.” 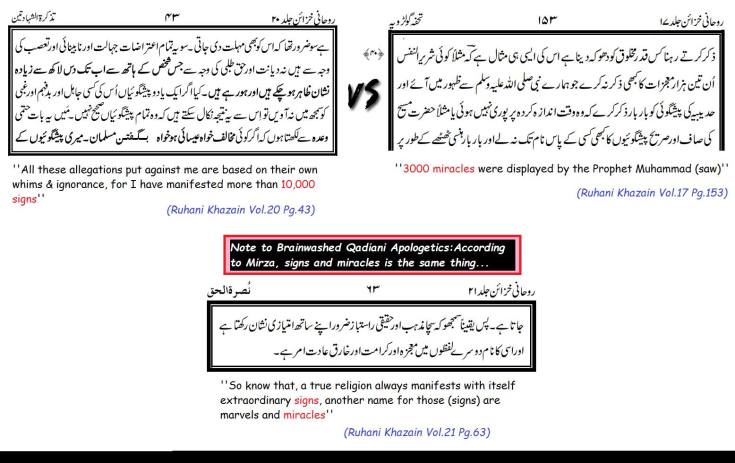 However, previously, MGA wrote that the best way to judge him was analyze his prophecies
“To Judge my truthfulness or lies, there is no better test than my prophecies.”
(Roohany Khazaen, Vol. 19, P. 288). This quote corresponds to one of these books Kashti Nooh, Tuhfat-un-Nadwa, Ijaz-e-Ahmadi, Review Mubahasa Batalvi-Chakralwi, Muwahib-ur-Rehman, Naseem-e-Dawat, Sanatan Dharam.  (1902-era)

The scans, typed out
“all of these allegations put against me are based on their own whims and ignorance, for I have manifested more than 10,000 signs” RK, Vol. 20, page 43. This quote corresponds to the books Tadhkirat-ush-Shahadatain or Seerat-ul-Abdal.  (1903-era)

“So know that, a true religion always manifests with itself extraordinary signs, another name for those (signs) are marvels and miracles.”  RK, Vol. 21, page 63

2 thoughts on “According to Mirza Ghulam Ahmad he manifested more than 10,000 miracles and the Prophet (saw) manifested only 3000.”