Barahin-e-Ahmadiyya vol.1 and 2—A full review

Intro
Mirza Ghulam Ahmad announced in 1879 that he was raising money for his arguments in support of Islam (see Dard). The book was finally published some time in 1880. Ahmadiyya leadership lies and claims that the book was already fully written and MGA only published a portion of it. The reality is that MGA had no ghost-writers at this time, and seems to have had this book written by himself and maybe a few friends like Sufi Ahmad Jan. The proprietor of the press wherein the BA1–4 was published was a Christian gentleman named Rajib Ali (See ROR, english, November 1912, page 475). It was thus published from the Safir-e-Hind Press, Amritsar. Miraj-ud Din Umar wrote a short biography about MGA in this book also, which was removed in future editions. There were many annoucements about this book also. Barahin-i-Ahmadiyya Vol. 1-4 was re-published in 1900 (see BA3, online english edition, see page 1), the second edition was published in 1905. Most of the announcements were added in 1900 and 1905.

There was also a small biography of MGA in the BA1-2
“Ghulam Ahmad loved sugar-candy very much. He also suffered from urinary trouble. He stuffed his pocket with pieces of dry clay (which were used to clean excrement)presuming they were nuggets of sugar-candy. This shows how be relished the candy. Sometimes he gobbled clay-pieces taking them to be sugar”” (‘See Ahwal.ul-Ghulam, Compiled by Mirajuddin in the supplement to Baraheen-i-Ahmadiyya, Vol. I, p.67)(See also “Qadiyaniat, an Analytical Survey” by Ehsan Elahi Zaheer, 21st edition, 1984).

The content
Mirza Ghulam Ahmad starts off his career as a book-writer by inserting an announcement in BA-Vol. 1. This announcement tells how MGA is in so much of a difficulty in getting this book published, MGA complains of the cost and etc etc etc, however, MGA could have used his own money to fund this book and thus solved all of these problems. However, as we know, MGA never spent his own money, he always spent other people’s money.

MGA then proceeds to give a list of donors. MGA goes on to write 9 pages of begging for money and additional names of donors. MGA had promised 300 arguments in support of Islam, however, he has just wasted 20+ pages with silly announcements and etc.

Then, MGA inserts his silly poetry. 20 pages of persian poetry. And no arguments in support of Islam.

In MGA’s poetry, his claim of being equal to Muhammad (saw) exists
This is very interesting, in MGA’s poetry, he writes about prophets, and how prophets are sent to all people and the need for prophets and etc etc.

MGA then writes a 2-page essay on his arguments–with huge FONT
Since MGA is a terrible writer at this point in his life, he proceeds to use HUGE FONT as he writes a 2-page diatribe on “arguments” and how someone should respond to his arguments and etc etc. Its really nonsense.

Then the book ends
This entire book is garbage, MGA filled it up with his silly poetry and announcements, there is no content. 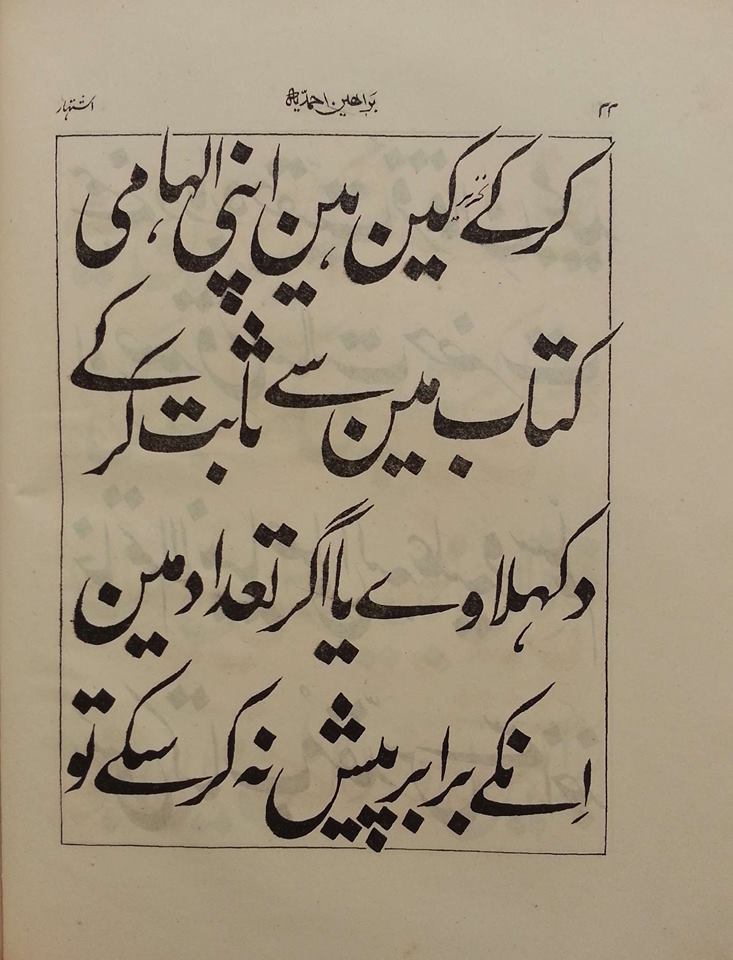 11 thoughts on “Barahin-e-Ahmadiyya vol.1 and 2—A full review”