Who is Sufi Ahmad Jan of Ludhiana? AKA Munshi Ahmad Jan

Intro
Mirza Ghulam Ahmad had a few disciples even before he made his claims, or before he published Braheen-e-Ahmadiyya vol. 1. One such disciple was Munshi Ahmad Jan of Ludhiana, who is also called Sufi Ahmad Jan of Ludhiana at different places in Ahmadiyya literature. Per the Al-Fazl of 1st July 1950, Mufti Muhammad Sadiq goes on record and tells the world that Sufi Ahmad Jan had in-fact done a bait with MGA even before he went for Hajj (roughly 1880). However, the Barahin-e-Ahmadiyya was a colossal failure, and MGA only boasted about his revelations and how he resembled Esa (as) in many ways, they also accused MGA of claiming prophethood (the Ahl-e-Hadith) and called him Kafir. Muslims of India had given MGA lots of money, since they expected MGA to write 300 arguments in support of Islam. By the publishing of Barahin-e-Ahmadiyya vol. 4, MGA was considered a Kafir by most Muslims (Ahl-e-Hadith mostly) in India. Sufi Ahmad Jan died in 1888 or a few years before that, thus, he was never able to get into the bai’t of MGA, however, he had instructed his children to accept MGA’s claims as soon as he made them. This proves that MGA was planning to make his claims as early as 1879. Mirza Masroor Ahmad tells us that he begged MGA to claim to be the “Messiah”, See Mirza Masroor Ahmad’s Khutbah Juma, of 4-17-2005 at the mark. It should also be noted that during the Bait ceremony of 1889, MGA was staying at the house of the same Sufi Ahmad Jan (see Dard page 203). Noorudin was married to Sufi Ahmad Jan’s daughter (Sughra Begum, she was most likely 12-14 years old)(see “Maulvi Noorudin” by Zafrullah Khan, online english edition of 2006, pages 82-83)(see also, “Hakeem Noorudin” by Syed Hasanat Ahmad, online english 2003 edition, pages 3, 41 and 73) in the same month of March 1889, they seem to have held this wedding on 7 March 1889 and the  bait ceremony a few weeks later. Sughra begum must have thus moved to Jammu with Noorudin, its unknown. Noorudin moved to Qadian from Jammu in the winter of 1892 (Sep-Oct). Sughra Begum thus lived in the same house as MGA’s wife and Maulvi Abdul Karim’s wife. His eldest son was Hajji Iftikhar Ahmad, it is written as Sahibzada Iftikhar Ahmad, Ludhianvi (with wife), Qadiani (See Dard, page 845, this is the famous list of the first 313 Ahmadi, he is #26), MGA mentioned him in his book Izala Auham. His younger son was Pir Manzur Muhammad, he gets famous in the world of Ahmadiyya in 1906, when MGA fails another prophecy. His name is written as Sahibzada Manzur Muhammad (with wife), Qadiani (See Dard, page 845, this is the famous list of the first 313 Ahmadi, he is #27).

Ahmadis lie about everything. This is another case of exactly that. They present a reference from Sufi Ahmad Jan (who was already a disciple of MGA) wherein he writes good things about MGA’s book. Zafrullah Khan, in “Renaissance of Islam” (pages 28-30)(Zafrullah Khan does not give a corresponding reference) tells us as follows:

“””That great personage, benefactor of mankind, source of benevolence and beneficence, personal proof of Islam, honoured above the commonalty and the nobility, Hazrat Mirza Ghulam Ahmad Sahib, may his blessings endure, Chief of Qadian, in the district of Gurdaspur, Punjab, has written a book designated Braheen Ahmadiyya in Urdu, of which two parts have been published and the rest will continue to be published from time to time and will reach the subscribers in due course.

This book establishes the truth of Islam and of the Prophethood of Muhammad, peace and blessings of Allah be upon him, and of the Holy Quran, through three hundred strong proofs of various types and refutes the Christian, Arya, Hindu, Brahmo Samaj and all other religions opposed to Islam, by means of convincing reasoning. The author has announced in the first part of Braheen e Ahmadiyya that if an opponent of Islam would set forth a refutation of all his arguments or half of them or even of one-fifth of them he would transfer the whole of his property, valued at ten thousand rupees, to him. This book completely frustrates all the opponents of Islam. and demonstrates the truth of Islamic teachings in such excellent manner that everyone realizes what a grand bounty are faith and Islam, and what a treasure is the Holy Quran, and what a grand verity is the faith of Muhammad. The verses of the Holy Quran that are quoted on their appropriate occasions in this book amount to two-thirds of the whole Quran. The book convinces the disbelievers, activates the indifferent, warns the neglectful, perfects the understanding of the believers, strengthens the roots of Islamic doctrines and wipes out the doubts that are expressed by the opponents of Islam. In this 14th century of Islam great confusion prevails among the followers of every religion. As someone has said, new disbelievers and new Muslims emerge every day. At this time a book was needed like the Braheen Ahmadiyya and a Reformer was needed like our revered master Mirza Ghulam Ahmad Sahib who is ready to prove the claims of Islam to the satisfaction of its opponents.

Hadhrat Sufi Sahib was a native of Delhi. During the disturbances of 1857, he migrated to Ludhiana along with his family. He was a saintly and pious soul with a captivating personality and a great God fearing contented person. He had a large number of pious souls of Sunni persuasion as his followers.

Though Sufi sahib died before the Promised Messiah (as) began taking oath of allegiance
from the faithful, he adored The Promised Messiah despite the fact that some of his followers hinted that he was degrading his status by openly praising The Promised Messiah. He replied to them, saying, that he did not care about his status nor did he need any followers. After the publication of “Braheen-e-Ahmadiyya”, if somebody approached him to join his order, he would
tell them, now that the sun has risen; all stars stand pale, go and follow Mirza Sahib (i.e. The
Promised Messiah). (Inaa-maat-e- Khudawand Karim: By Pir Iftikhar Ahmad)

The Promised Messiah (as), grieved by his demise, wrote, “ i am writing this with a heavy heart as one of my dear brother in Islam has expired, May Allah grant him a high station in the Hereafter. Inna Lillah-e-Wa – Inna Alaih-e- Raje-Oon. I feel very distraught at his sudden
parting. Hajji Sufi Ahmad Jan was a spiritual leader of a large number of people”.

HAZRAT MOULVI SAHIB KEE SHADI LUDHIANA MAIN. After this letter things changed very fast, the rishta being seeked in the family did not accomplished, the detail of which we do not know. So Hazrat Masih Maoud wrote many many letters (to get a bride (rishtas) for noor uddin). And in the end, rishta was agreed with Sahibzaadi Sughra Begum, daughter of Munshi Ahmad Jaan, (rishta kee tajweez pakee ho gai). And Hazrat masih Maood with hazrat Khalifa Awal and some friends went to ludhiana (shadi kee paraat lay ker ludhiana gaiy). After the nikah, they came back with the bride. This event took place before 7 March 1889. 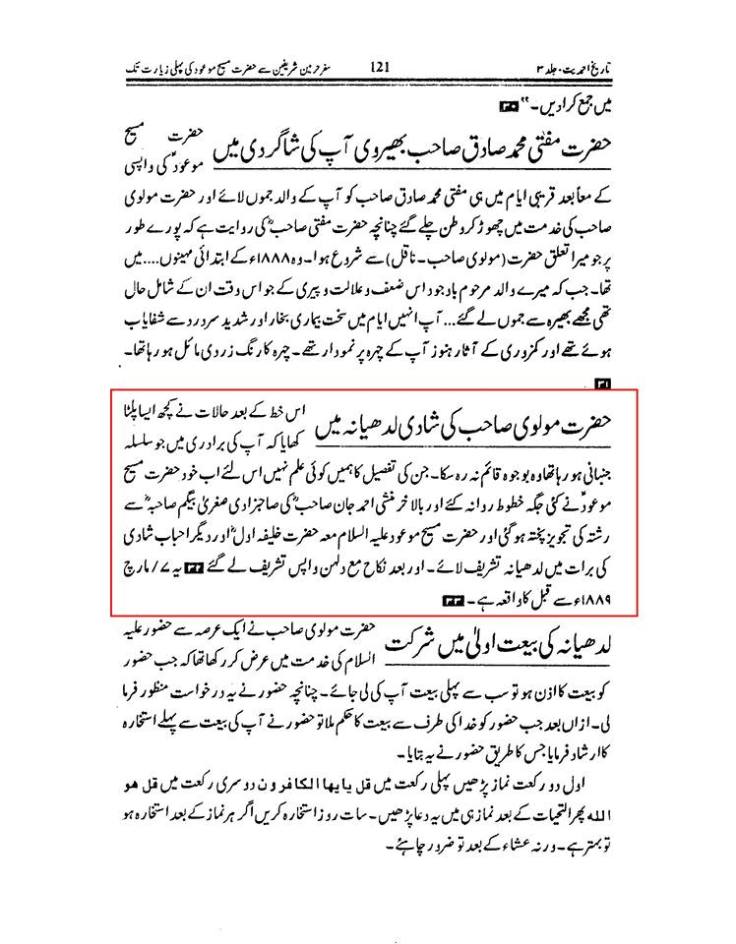 Mirza Ghulam Ahmad was considered a Kafir in 1884, before his wildest claims

13 thoughts on “Who is Sufi Ahmad Jan of Ludhiana? AKA Munshi Ahmad Jan”