Intro
Not much is known of General Nazir Ahmad. Qasmi wrote that he was an Ahmadi and his name was listed as an Ahmadi officer in 1947 in a list that was presented to the Boundary Commission and later re-published in a newspaper (See page 46). He initiated the famous failed coup of 1950, also called the Rawalpindi Conspiracy Case. His full and proper name was Major General Nazir Ahmad Malik. He was son of Subedar Fateh Mohammad of Dulmial (his grandson seems to have written about him in 2016 via Facebook.

The other Ahmadi Generals
We have written about General Abdul Ali Malik and General Akhtar Hussain Malik (these 2 are brothers), Zafar Ahmad Chaudhry, Major General Iftikhar Janjua, Brigadier General Ijaz Ahmad Khan, the Lahori-Ahmadi Major General Abdul Saeed Khan, and we are still adding to the list. . There were also those were super trusted by the colonist back in 1947, they were Major Malik Habib-ullah (who died at the age of a 100) (from Dhulmial), Captain Nizam ud Din (he was the father of Brigadier General Mohammad Iqbal Khan) and Captain Umar Hayat (father of Commander Yousaf).

1948
Major General Nazir Commanded a division in Kashmir war while Major General Akbar was from ASC and not a fighting arm general.

1950
He initiated the famous failed coup of 1950, also called the Rawalpindi Conspiracy Case. He seems to have been arrested and served time in jail. 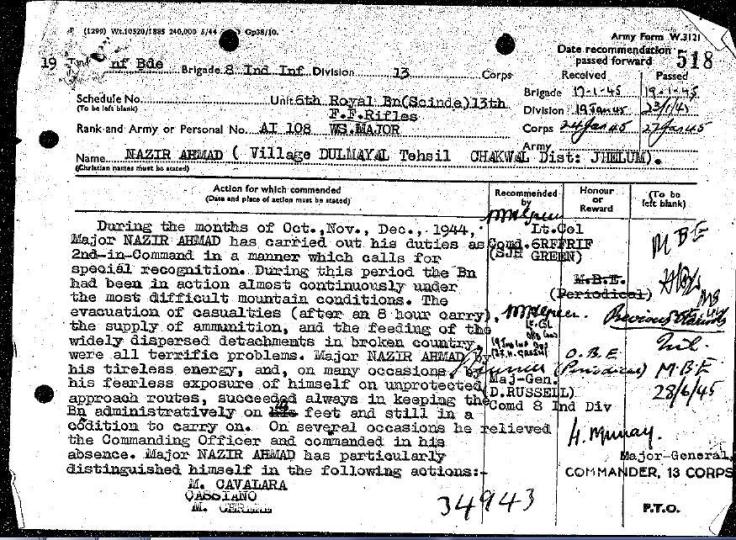 9 thoughts on “Major General Nazir Ahmad was also an Ahmadi”