Intro
He emerged under Zia ul Haq in the early 1980’s and became one of Pakistan’s most eminent surgeons and a former head of Pakistan Army’s surgical establishment (1977–1988), Lt-Gen Mahmood-ul-Hassan died in Rawalpindi on Jan 26 2019. He was buried the same day in a graveyard at Tarnol in the suburbs of the capital. In 1983, he removed Zia’s gall bladder. In 1988 he retired, right after Zia died, he retired as Director General Surgery Pakistan Armed Forces and Head of Surgical Division at Army Medical College with which he is still affiliated as Prof. Emeritus. In 2004, after he retired, he proved that he was a Qadiani by showing up on their Satellite TV channel MTA. You can see him here reading out his poetry. Apart from being a well-known surgeon, he also got recognition as a noted poet and so far six of his poetry books have been published. He was fond of poetry and got recognition as a poet while he was still in School (See “Hadees-e-Arzoo Mandi: An autobiography” by Lt. Gen. Mahmud-ul-Hassan—A review by the grandson of Mahmood ul Hassan,Shaukat Ali Jawaid).). He was listed as a Lt. General in a famous list of Ahmadi officers in the Paksitani military as of 1987. He isn’t listed by his name, a slot occupied by an outward Ahmadi for Lt. General is considered to be his.

His children
He leaves behind three children. His son, former Professor of Surgery at Rawalpindi Medical
University, is currently working at Dubai, United Arab Emirates (UAE). His daughter is an
Assistant Professor of Psychiatry at Rawalpindi Medical University (RMU), and her husband
Professor Fareed Minhas, an eminent Psychiatrist retired as head of the Institute of Psychiatry at the RMU. The department progressed a lot under his leadership. Another daughter, Col. Sabahat is retired from the Army Medical Corps and runs a Cosmetology clinic.

The famous Ahmadi Generals
The first ever Ahmadi General was General Nazir Ahmad (1947), he was mentioned in the famous list of 199 Ahmadi officers that was presented to the boundary commission in 1947. Colonel Mirza Daud Ahmad was also mentioned in the list, he is a grandson of MGA. After him came General Abdul Ali Malik and General Akhtar Hussain Malik (these 2 are brothers), Zafar Ahmad Chaudhry, Major General Iftikhar Janjua, Major General Ijaz Amjad, Brigadier General Ijaz Ahmad Khan, Brigadier General Waqiuz Zaman, the Lahori-Ahmadi Major General Abdul Saeed Khan, and we are still adding to the list. There were also those were super trusted by the colonist back in 1947, they were Major Malik Habib-ullah (who died at the age of a 100) (from Dhulmial), Captain Nizam ud Din (he was the father of Brigadier General Mohammad Iqbal Khan) and Captain Umar Hayat (father of Commander Yousaf), Major-General Nasir Ahmad Chaudhry is another. In terms of Medical Doctors, Dr. Major Shah Nawaz, Commander Dr. Abdul Latif (ww-2 era) were some of the first. During Zia’s era, Lt-Gen Mahmood-ul-Hassan and his protege Major General Dr. Mahmood ul Hassan Noori who was probably the last Qadiani to make it to the rank of General.

Famous Ahmadi officer’s who almost made General
Major Syed Maqbool Ahmad was a colleague of Zia and one of the founders of ISI.

Nasir Ahmad Faruqi (a Lahori-Ahmadi)
He was the principal secretary for Ayub Khan from 1959 to 1969 as well as Chief Election Commissioner of Pakistan for the 1965 election, which was totally rigged. The elections in Pakistan were under his control in 1970 also.

1925
He was born on July 17th 1925 in Amin Abad in District Gujranwala in a poor family. His father was a Clerk in a civil department but was very intelligent. When his father was transferred to Dikshai Cantonment near Shimla, Mahmudul Hassan was admitted to Middle School there. The Headmaster and his Deputy, Mahmudul Hassan writes were very brilliant teachers. During holidays, the Headmaster asked the students to daily write a letter to him in English. One of the Essays I wrote, he says, was “Walk through Hills” wherein I used some very difficult words with the help of Dictionary. Headmaster Aadat Ram was very pleased after looking at my writings but then said “Never use difficult words in writing because there will be more chances of mistakes”. Hence the message for everyone, always use simple words and simple easy to understand English to minimize the chances of any mistakes. While he was studying in this school, Mahmudul Hassan’s father was shifted from civil cadre to Military Cadre with the rank of Subedar Clerk (See “Hadees-e-Arzoo Mandi: An autobiography” by Lt. Gen. Mahmud-ul-Hassan—A review by the grandson of Mahmood ul Hassan,Shaukat Ali Jawaid).

1942
He graduates from the Islamia High School Ferozepur in First Division with very high marks. He then went to the Islamia College and got admitted there in FSc Pre-medical.

1942—1947-February
His student days at King Edward Medical College from where he graduated in 1947 six months before the independence of Pakistan.

1947, Aug–Dec
He worked at the Mayo Hospital during partition of the sub-continent and managing victims who came from East Punjab and other parts of India, many interesting incidents in his professional life, his professional career in Army besides important patients he had the opportunity to operate upon and all this has many lessons to learn for the reader.

1950
He then joined the Pak Army Medical Corps (PAMC) later known as Army Medical College (AMC). He was posted in Field Ambulance Tararkhel, Azad Jammu and Kashmir (AJK).
There was a small operation theatre where he operated to his heart‟s content, even though he
was not a classified surgeon. A year later he was posted to Combined Military Hospital (CMH)
Lahore. Seeing his surgical prowess, the ADMS Col M N Mahmud appointed him as a graded
surgeon, even though grading was exclusively performed in CMH Rawalpindi. Few months later, he became the surgeon in CMH Lahore, as well as the Director of Artificial Limb Centre. At a
very young age and after a short span of service he was promoted to the rank of Major. At that
time, there were only five senior surgical specialists in Armed Forces. He was inundated with
work, but chose to do more and more; he apprenticed with Prof Samee who was a visiting gynaecologist from KEMC and learnt the art and science of gynaecological surgery, and started filling in for the gynaecologist when she was on leave (see his obituary). He had earned the rank of Major at a very young age.

1953–1956
He was engaged in January 1953 and got married in October 1956. Went to United States in 1955 and learnt general surgery, plastic surgery at Brook General Army Hospital. He also served in Naval Hospital in Karachi for some time. He is full of praise for Lt. Gen. Shaukat Hassan who was Director of Surgery in Army.

1961
In 1961, he was sent to the United Kingdom (UK) for further specialist training. He passed the Fellowship of the Royal Colleges of Surgeons (FRCS) exam. He was heard telling his personal assistance (PA), not to forget to print MS qualification on his writing pad, as he had worked much harder for it.

1962–1965
He returned from the UK in December 1962 and was posted to CMH Lahore, the second largest Military Hospital in Pakistan. He was promoted to the rank of Lt. Col. During the 1965 war, he was the only surgeon in the hospital. He held the fort with dedication, and worked day and night performing surgery on the wounded soldiers. He was later joined by a couple of surgeons from Mayo hospital. During a black out, a trolley carrying a patient ran over his foot, fracturing his metatarsal bones. He never reported sick and continued to work with a hugely swollen and painful foot.

1971
In 1971, Col Mahmud Ul Hassan was posted to CMH Rawalpindi and the Armed Forces
Medical College, now know as Armed Forces Post Graduate Medical institute (AFGMI). When
FCPS courses were started at the Armed Forces Medical (AFM) College, besides teaching surgery he was made in charge of teaching clinical Anatomy to the FCPS Part 1 students. at that time, he was also posted at AFM College/ Military Hospital (MH) Rawalpindi and was the in charge of the Fellow of College of Physicians and Surgeons Pakistan (FCPS) Part 1 course. During the FCPS courses, the officers (students) were asked to fill feedback forms regarding the assessment/performance of the teachers, and Col. Mahmud ul Hassan was voted the best teacher in clinical/ surgical Anatomy. He excelled in teaching, building clear concepts, and incorporating poetry into his lessons to illustrate and enhance understanding. He was an orator par excellence and mesmerized his audience. During the 1971 war, he again remained busy day and night, performing emergency surgeries on injured soldiers evacuated from the front lines. Even in 1971, there were not many surgical specialists in the Armed Forces.

1972–1976
Bhutto would not allow him to make the rank of Brigadier General.

1976
In 1976, when the Army Medical College was established, he taught clinical Anatomy and
Surgery. He later on became the Head of Department of Surgery. Even when he attained the
higher ranks of Major General and Lt. General, he continued as Head of the undergraduate surgical courses in addition to the post graduate teaching. After his retirement, he remained on the honorary teaching panel. Lt. Gen Ayub Khan was the Principal of the Army Medical College. He ordered that Lt. Gen Mahmud ul Hassan will remain the de facto Head of the Surgical Departments, even though there were others on papers as the Head of Surgery.

1979
He is promoted to Major-General by Zia. After sometime I was made Director of Surgery and since Principal of Army Medical College. Zia trusted him so much, he made him Director of Surgery as well as Head of the Surgical Division which was a prize and no one else have ever held these two coveted positions simultaneously. This had earlier happened just once when Prime Minister Z.A.Bhutto had offered this status to General Malik Shaukat Hassan.

1984
Even after Ord-XX, Lieutenant General Mahmood ul-Hassan remained loyal to Zia and continued working in the Army.

1988
He retired from the Pakistan Army in July 1988. Right after Zia ul Haq died. He retired as Director General Surgery Pakistan Armed Forces and Head of Surgical Division at Army Medical College with which he is still affiliated as Prof. Emeritus.

2004
He made videos with MTA-Pakistan wherein he recited his poetry, however, he never discusses his life and Zia ul Haq.

2009
He lost his wife due to complications of diabetes mellitus. He remained in emotional turmoil, and became a recluse, not attending gatherings of his interest like mushairas. He suffered from cancer of larynx and after a brief illness passed away in 2019.

2019, Jan 26
He dies in Rawalpindi on Jan 26 2019. He was buried the same day in a graveyard at Tarnol in the suburbs of the capital. See here on twitter also, #ahmadis celebrated him as a Qadiani. 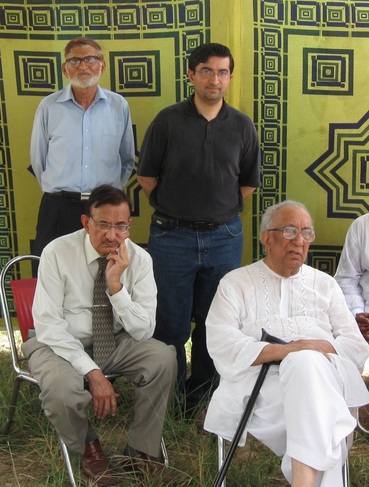 Hadees-e-Arzoo Mandi: An autobiography by Lt. Gen. Mahmud-ul-Hassan, A review by the grandson of Mahmood ul Hassan,Shaukat Ali Jawaid).

He also got recognition as a noted poet; published 6 poetry books.

He served his nation for many decades as an #AhmadiMuslim. pic.twitter.com/PpEecRf8ql