In Qadian, Mirza Ghulam Ahmad was allowed to be intimately touched by all women and men

Intro
In 1935, the Khalifa, Mirza Basheer-ud-Din Mahmud Ahmad described his father as a bon-vivant.  He was in court and dealing with a Hindu Judge, Justice Khosla (see page 122), this judge dealt with ahmadiyya fairly and called it fangled and disturbing, he made many other comments about sex drugs and etc.  This had happened before, almost all the Hindu judges who saw a case involving MGA, they found him guilty, however, in all of these cases, MGA would win on appeal, either that or a British judge would exonerate MGA (see the story of abdul hameed being sent for murder).

Even the Lahori-Ahmadi’s weighed in and condemned the behaviors of the Qadiani Khalifa.  Muhammad Ali commented on the matter here and seemed taken aback by the behaviors of his former colleagues (see page 3).  We have presented many quotations in the below which prove that MGA always kept toilet attendants who also worked as masseuses.

“”””Question: why mirza Qadyani was allowed to touch to other women .

Answer : He was innocent. It allowed to him to touch and ikhtalat. It was for barkat and mercy.”””

Mahmud Ahmad was also a womanizer
Interestingly enough, Mahmud Ahmad was accused of the same crimes in 1906, he had some type of affair with the daughter of a male-attendant of MGA.  Between 1927 and 1937, several members within the community began to allege that Mahmood Ahmad was involved in acts of sexual impropriety. To exonerate himself of these accusations, Mahmood Ahmad stated:

There are many additional references

1- Women use to guard mirza qadyani at night

Another ref from Al-Fazl (scan needed)
“My late wife…..went to Hazrat Promised Messiah at the age of 15 in Dar-ul-Iman (Mirza’s private room) …the sire very much liked her service of massage his legs”. (Al Fazl, March 20, 1928, pages 6-7, by Ghulam Muhammad Qadiani)

SEERATUL MAHDI PART III PAGE 722
(780). Dr Mir Muhammad Ismail narrated that Ummul Momineen (Nusrat Jahan begum) once told that hazrat sahab had an old women servant namely Bhano. One winter night when it was chilling cold she started massaging the legs of hazrat sb. Since she was massaging the legs of hazrat sb without removing quilt so she could not have any idea as to what she was massaging, was wooden side piece of bed. After a while hazrat sb said to bhano. It is very cold tonight bhano? Bhano replied in punjabi “HAN JI TADE E TE TUHADIYAN LATTAN LAKRI WANGOON HOYAN HOYAN AIN.” MEANING:- Yes sir that is why your legs have become stiff as wood.

This humble self states that hazrat sahab by asking question from Bhano might have drawn her attention to the fact that extreme cold has made u so senseless that, u don,t even realise whatever u r massaging are not my legs but these are wooden pieces of bed. But her answer turned it into a laughing stock.
This humble self says that bhano was a resident of village Basra near Qadiyan and was a faithful and religious lady according to her environment.

“””” when under epilepsy fits, Hazrat Masih e Maud used to get his feet oil massaged and asks the servants to massage his body very hard and in this way he gets relaxed.””””

Mirza Qadyani use to wake up Lady (Non Mahram) Hasouu by sprinkles of water, as he use to go for toilet early morning. Mirza use to wake her up for prayer. 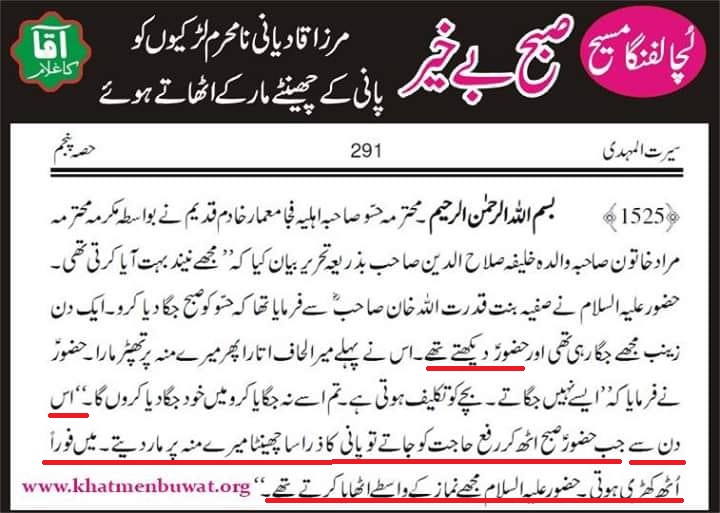 17 thoughts on “In Qadian, Mirza Ghulam Ahmad was allowed to be intimately touched by all women and men”