Intro
We have found Ahmadiyya leadership editing out a certain reference in terms of Takfir in the 2009 online english edition of Tadhkirah. In, fact there were many changes, however, no reasoning is ever given. Ahmadiyya leadership just edits things out as they deem fit. They don’t tell us as to who ordered the removal or why. This is the level of deceit that Ahmadi’s have operated with over the past 100+ years.

You can also listen to Zia Rasul from the Aaqa Ka Ghulam youtube channel explaining this issue in Urdu herein, at the 21:04 mark).

The Ahmadiyya editing team is notorious in their attempts to clean out the controversial writings of MGA. This is how Ahmadis begin to delete data. However, this data is still available on the Ahmadi website under “Essense of Islam” Vol. 4 (see page 87). And it is mentioned in the writings of Mahmud Ahmad. Interestingly enough, this quote was also quoted in 1935, in the Al-Fazl. Thus, this quote was approved by the sons of MGA for over 70 years. 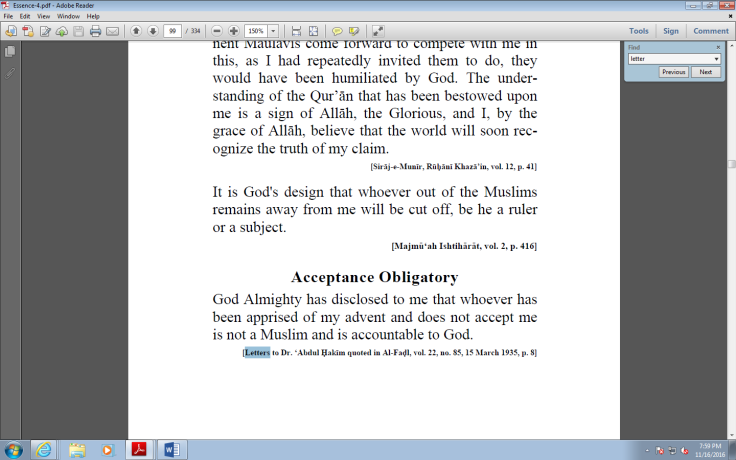 The Lahori-Ahmadi refuse to call Muslims as Kafirs, however, the Qadiani-Ahmadi are eager to do so.

The Khalifa’s brother, Mirza Bashir Ahmad does open Takfir on Lahori-Ahmadi’s and all other Muslims.

The Ahmadiyya Khalifa does open Takfir.

Ahmadis editing their books on Piggot