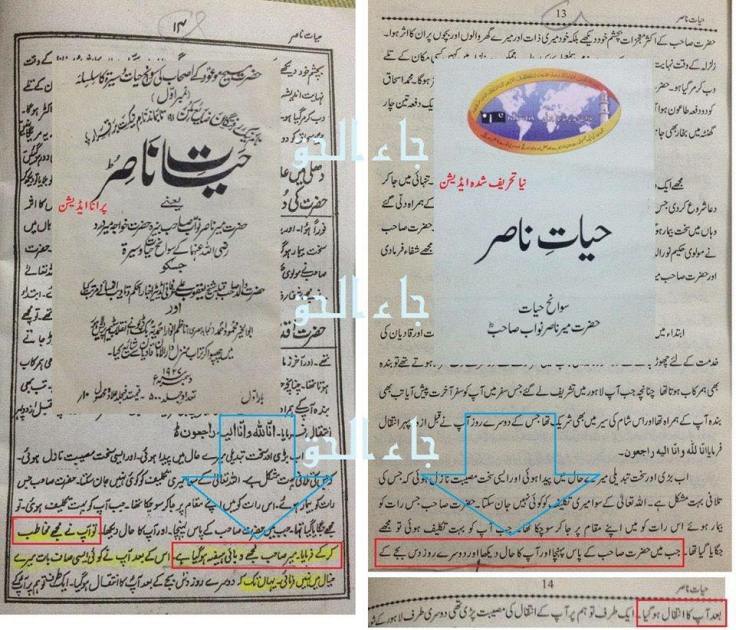 Now the second edition which is changed –it does not give the year of printing.

Conclusions
These books are not on the official Ahmadiyya website, alislam.org.  We have found these books from our contacts in the UK and Pakistan. Nonetheless, Ahmadiyya Khalifas authenticated this book. However, they refuse to comment on the editing job in the second edition.

In June 08th 2018, Hani Taher wrote an article regarding the deleted text of in the book Hayat Nassir page14, that says that Mirza died with Cholera. Hani Taher Article was entitled: “The Ahmadiyya has fallen … the deliberate falsification… the story of cholera”,. In that Article Hani Taher said:
“”He who has such courage to delete people’s words is not trusted at all. This is conclusive evidence that this group is a professional liar.”
In 15/December/2019 Hani received a new version where the original text was written again.
There are a lot of examples like this in the Ahmadiya books, where you will find deleted paragraphs, after being critacised by Muslims.
Original: https://tinyurl.com/ur9my5o
Deleted: https://tinyurl.com/spkhu3r
Written agan: https://tinyurl.com/rr7933a