Intro
Ahmadiyya sources should never be trusted, we should always be looking to verify their information. When MGA died in May of 1908, the Ahmadiyya editing team began backdating his year of birth to 1836 or 1837, which was used from June of 1908 until the 1930’s when it was officially moved to 1835, even the Lahori-Ahmadi adopted this DOB. The essay in the below, was written by Maulana Abu Kalamazad, in 1908, he seemed to be unaware that MGA had claimed prophethood.

The academic dishonesty of Ahmadis is well known. They purposely lie and edit their own writings and refuse to acknowledge all the sources on any given topic. In this specific situation, when MGA died, Ahmadiyya leaders quoted many newspapers as they commented on the death of MGA, however, they purposely left out the Vakil. However, we have now found it…

The Vakil Amritsar dated 30th May 1908 couple of days after the death of Mirza. Its editor name mentioned on top is Dost Muhammad Shahid. Remember per Seerat ul Mahdi Mirza used to call for, this News paper from Amritsar and MGA was a regular reader of this paper in his life time.

The front page of the paper carries article on the death of Mirza as under:-
The Vakil Amritsar dated 30th May 1908

“”””LATE MIRZA GHULAM AHMAD
The day of 26 May 1908 will be remembered in latest religious history of India for long time when at about 10 am Mirza Ghulam Ahmad Qadiyani died of cholera disease or as per saying of few due to some other disease. Late Mirza was staying at Lahore for the treatment of his wife and change of climate but the powerful order of Allah and time of departure which rich and poor common men and Nabi of great caliber have to face, has come for a person who by his amazing claims had created a tremor amongst religious ranks.””” 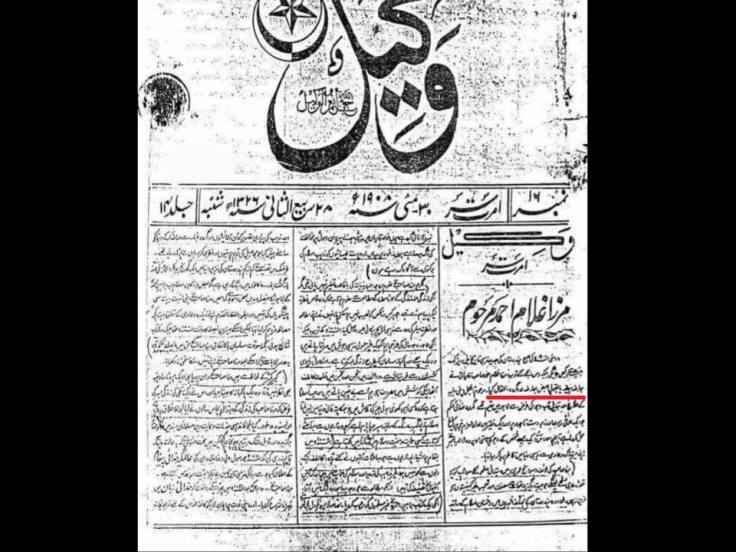 Ahmadiyya leadership about the Date-of-Birth of Mirza Ghulam Ahmad

Ahmad, the Messenger of the Latter days: By Mirza Bashir-ud-Din Mahmud Ahmad (1924)

Happy Birthday to You Mirza Ghulam

Maulana Abu Kalamazad was the editor of the Vakil in 1908, when MGA died

Was Maulana Abu Kalamazad the editor of the Vakil in 1908 and his relationship with Ahmadis?