Intro
Mirza Ghulam Ahmad and Maulvi Noorudin created Ahmadiyya as their collective brainchild.  MGA would have the dreams and make the wild claims and Noorudin would defend MGA and build a team of writers, imams and language scholars. MGA knew Noorudin from the 1870’s, they both had correspondance with Sir Syed in this era also, they were both also members of the famous Ahl-e-Hadith sect of Northern India, this sect never numbered more than 100,000 in British India in the late 1890’s, thus, almost everyone knew each other.  Here are some names of the main ghost writing team, Maulvi Abdul Karim, Maulvi Mufti Muhammad Sadiq, Maulvi Sher Ali and Hakim Fazl Din of Bhera. Some other people who came independently, yet still joined MGA’s team was Maulvi Muhammad Ahsan Amrohi, who was also a member of the Ahl-e-Hadith sect, in fact, uptil his job with MGA, he worked for the founder of the Ahl-e-Hadith sect, Syed Nazeer Husain from Delhi and Siddiq Hasan Khan of Bhopal. Maulvi Muhammad Ali was another, however, he came via Khwaja Kamaluddin and the prominent Ahmadi’s of Lahore.

Maulvi Abdul Kareem, Maulvi Ahsan Amrohi and Maulvi Noorudin were the imams at Qadian
MGA never led any prayers in any mosque in his whole life. He needed some imams to do this job for him. They led the prayers at Masjid Mubarak and Masjid Aqsa on Friday’s for Juma or for Eid. Their imamate was mostly via the Masjid Mubarak, Maulvi Abdul Kareem was the main imam.

MGA had a broken right arm from his youth
MGA could not be a serious writer, his arm just didn’t have the strength required to write all day, he thus had his team write and advise him accordingly, he would have his scribes send all writings to Noorudin, Amrohi and Abdul Karim for final approval. In fact, MGA needed toilet attendants to help him relieve himself.

MGA spoke with a huge stutter and thus couldn’t be an Imam
The main issue was that MGA spoke with a terrible stutter his entire life. Thus, he could never give a proper speech, give adhan, or lead prayers.

MGA was high on opium and indulged in massages
Ahmadiyya literature is filled with data which proves that MGA was taking opium everyday just to alleviate his pain from his many ailments. Thus, MGA could not be a writer and come up with these claims, Noorudin managed all of this for MGA. MGA got massages from men and women, and sometimes all night.

Amrohi didn’t want MGA to claim prophethood
MGA’s son tells us that there was a huge argument on this topic in 1900. Ahsan Amrohi had no idea that MGA was about to claim prophethood and was shocked, whereas, Maulvi Abdul Kareem knew the inside story. After initially following the Qadiani-Ahmadi’s and supporting the prophethood of MGA, Amrohi recanted and seems to have joined the Lahori-Ahmadi’s, he was dead by 1919 nevertheless.

Noorudin wrote BA5 after MGA died and published it
After MGA died, many old books were being published, “Jesus in India” was published, BA5 was published and many others. The intro to BA5 is a dead give off that someone is an editor here, it mentions the famous 50=5 argument, Noorudin was obviously the editor.

“His holiness (Mirza) used to send manuscripts of his Arabic books to his first Caliph (Nuruddin) and also to Ustad Mohammad Ahsan. The first caliph used to return the manuscripts after reading them, mostly as he took them. As for Ustad Muhammad Ahsan, he exerted his utmost effort and at some places used to change words for correction.” (Seerat-ul-Mahdi, Vol. 1, P. 91).

Mirza Ghulam Ahmad even asked others to submit articles to be included in his book. Here is a letter Mirza composed to Chiragh Ali:

“I have been much pleased to receive your letter. From the very beginning, it has been my desire to serve Islam. Your book has encouraged me tremendously… If you have any articles, send them over to me… Your article about confirmation of prophethood has not reached me so far, although I have waited for it long. Therefore, I bother you once again to send me your article without delay. I would like you to write another article for me about affirmation of the reality of Quran, so that I may be able to include it in my book Baraheen-e-Ahmadiyyah.”
(Seyar-ul-Musannifin, Letter to Chiragh Ali;)(As reported in Qadiyaniat-An Analytical Survey). 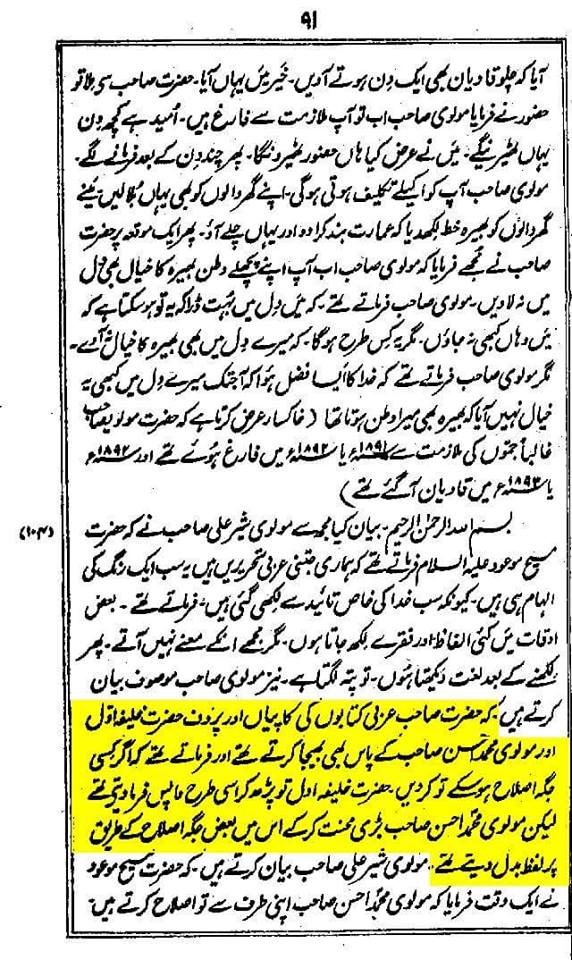