Intro
MGA already believed that Esa (as) was dead, he began believing this as early as the 1880–1884 era. He followed the writings of Sir Syed and the Aligarh Movement, Sir Syed’s Tafsir on the Quran was published in that era. Obviously, Sir Syed believed that Esa (as) was dead before he wrote this tafsir, as early as the mid-1870’s. Noorudin was a follower of Sir Syed….and a friend of MGA.

Death of Prophet Jesus (AS) — 30 Verses from the Holy Quran:

“””I am very much aware that in Islam this word has been employed in a figurative sense to refer to the seizure of the soul in order to prove the everlasting nature of the soul. It is unfortunate that even though some ‘ulama (religious leaders) know that the real meaning of tawaffa is to die, they yet put forward another interpretation to the following verse – “but when You caused me to die (tawaffaitani)” – claiming that this death will take place after the second advent of the Prophet Jesus (as). What is amazing is that they evince not the slightest feeling of shame in proffering such a disgraceful interpretation. They do not bother to consider that before this statement of Prophet Jesus (as) – (“but when You caused me to die”) – the verse states: “When (idh) Allah will say (qala): O Jesus, son of Mary, didst thou say to men, Take me and my mother for two gods besides Allah? He will say: Glory be to Thee! it was not for me to say what I had no right to (say). If I had said it, Thou wouldst indeed have known it. Thou knowest what is in my mind, and I know not what is in Thy mind. Surely Thou art the great Knower of the unseen. I said to them naught save as Thou didst command me: Serve Allah, my Lord and your Lord;
and I was a witness of them so long as I was among them, but when Thou didst cause me to die Thou wast the Watcher over them. And Thou art Witness of all things” (5:116-117).
It is obvious that qala (he said) is the past tense of the verb and before this there is the particle idh (when) which further emphasises the fact that reference is made to the past. From
this, we can deduce that this matter obviously pertains to the time of a former descent and not to a future one. So, too, the reply of Prophet Jesus (as) – “but when You caused me to die” – is the past tense as well as several other matters which precede this one in the Holy Qur’an and are described in the same way and these also support the point as, for example…”

“This has to be admitted that Hazrat Eisa is also dead, and interestingly enough the grave of Hazrat Eisa is also in Syria and for further clarity, in the footnote, I include the testimony of My brother, My lover in Allah, Molvi Mohammad Al-Saeedi Trablisi. He is a resident of Tripoli, in the Country of Syria and in his area is the Grave of Hazrat Essa AS (Jesus). If you say that Grave is phoney, then you must provide the proof of this forgery, and prove that when this forgery took place. And in this event we will not be sure about the graves of any prophet and trust will be lost, and we will have to say that all those burial places are fake.” (Atmam E Hujat, Page: 18-19, Roohani Khazain vol.8 p.296-297, dated 1894)

It should be noted that in MGA’s book called ‘Raz-e-Haqiqat”, which was translated and published into english in 2016, see pages 30-31, they only quoted half of the relevant quote, and the reason was because the first few sentences assert that Yuz Asaf was the son of a King, not a fatherless man.

The exact quote
The relevant portion is page No. 86 lower side and here is the translation :-

“Hazrat Syed Nasiruddin Khanyari belongs to magnificent Sadat (from the linage of holy prophet pbuh), he was amongst those who wants to remain in hiding. In an event he made his appearance at the grave of blessed Mir sahib at Mohallah Khanyar. This grave is the place of epicentre of light (Noor). There is a grave stone lies near to it. It is famous among common men that this is the last resting place of a prophet who was deputed for this place in the ancient times. The place is known to be a prophet’s place. One of a history books describes a far flung story that one of the sons of a king came here to gain piety he remained busy in the prayers (ibadat & riazat) of “his God” day and night and was deputed as prophet for the peoples of the area. He came to Kashmir to call the people towards “his God” (dawah) and was buried here after death. In that book his name is mentioned as Yuz Asaf. Most of the pious people particularly the murshid of this author Mullah Inayatullah says he smells the traces of prophethood at this place, however definite knowledge rests with Allah”. 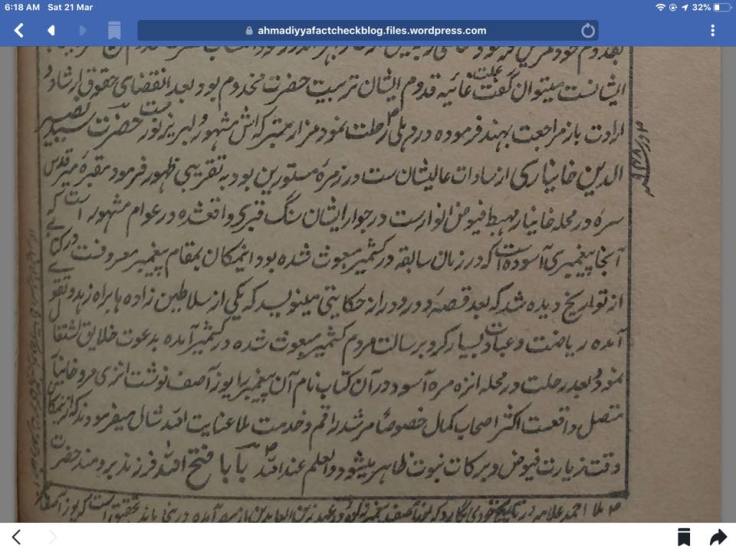 Mirza Ghulam Ahmad was dishonest as he quoted Ayn-ul-Hayat, as he lied about Yuz Asaf (1898)

Yuz Asaf and Jesus in India quotes and references in the English Review of Religions, 1902–1914

Pappas, Paul Constantine, “Jesus’ tomb in India : the debate on his death and Resurrection” (1991)—he accuses Ahmadiyya of academic dishonesty

Yuz Asaf is not Esa (as)

How did Budhasaf become Yuz Asaf?

“The Alleged Sojourn of Christ in India” (1894) by Max Muller

Lahori-Ahmadis cast doubt on the Jesus in India theory