Intro
The main issue of Takfir in Ahmadiyya happened around 1906 and the controversy between MGA and Dr. Khan and the topic of whether or not a Muslim needed to accept MGA or not.  Dr. Khan was a follower of MGA before MGA claimed prophethood and before MGA ever did Takfir, in fact, by 1901, MGA was saying that the acceptance of “non-law” bearing prophets was not mandatory in Islam (See Tiryaq ul Qulub, 1902).  See the full quote here:

”””From the beginning, I have been of the view that no one becomes a kafir or a dajjal by rejecting my claim Such a one would certainly be in error and astray from the right path. I do not call him faithless but he who rejects the truth which God Almighty has disclosed to me would be in error and astray from the straight path. I do not designate anyone who believes in the Kalimah as a kafir, unless by rejecting me and calling me a kafir, he himself becomes a kafir. In this matter, my opponents have always taken a lead. they called me kafir and prepared fatwas against me. I did not take the lead in preparing fatwas against them. They would be prepared to confess that if I am a Muslim in the estimation of God Almighty, then by calling me a kafir, they themselves become one according to the fatwa of the Holy Prophetsa. Thus I do not call them kafir but they themselves fall within the purview of the fatwa of the Holy Prophetsaw” (Tiryaq-ul-Qulub, Pages 130-131, Ruhani Khazain Volume 15, Pages 432-433)””

However, MGA’s behavior had changed since then, MGA was a full fledged “ummati-Nabi” by 1906, and he wasnt holding any punches.  MGA died of cholera on May 26th, 1908, ahmadiyya leadership was quiet on the cause of death, however, the truth was that MGA had only went to Lahore in April of 1908 to seek treatment, as he was suffering from cholera and eventually died of it.

Summary
MIRZA AND DR ABDUL HAKIM KHAN PATIALVI.
BOOK CHASHMA E MOARFAT PAGE NO 336-337
MIRZA WRITES :-
“””SIMILARLY MANY ENEMIES AMONG MUSLIMS STOOD AGAINST ME AND WERE KILLED. NOW THERE APPEARED ONE LAST ENEMY KNOWN AS DR ABDUL HAKIM KHAN PATIALVI. HE IS A DOCTOR FROM PATIALA HE CLAIMS THAT I WOULD BE KILLED IN HIS LIFE UPTO 4TH AUGUST 1908, AND THIS WOULD BE A SIGN OF HIS TRUTH FULLNESS AND HE CLAIMS IT IS A REVELATION TO ME FROM ALLAH SWT. HE DECLARES ME AS KAZZAB, DAJJAL AND KAFIR.
HE TOOK MY ALLEGIANCE AND REMAINED MY FOLLOWER FOR 20 YEARS.BUT WHEN I GAVE HIM AN ADVISE HE DEVIATED. THE ADVISE WAS GIVEN JUST FOR ALLAH,S SAKE WHICH WAS THAT HE WAS OF THE FAITH THAT ONE CAN GET DELIVERANCE IN THE WORLD HEREAFTER WITHOUT ACCEPTING HAZRAT MUHAMMAD S.A.W. I TOLD HIM THAT THIS BELIEF IS AGAINST ISLAM AND MAJORITY OF THE ELDERS OF ISLAM.BUT HE TURNED A DEAF EAR TO IT, FINALLY I REMOVED HIM FROM MY JAMMAT.THEN HE PROPHESIED THAT I WOULD BE KILLED BY 4TH AUGUST 1908 IN HIS LIFE TIME. BUT COUNTERING HIS PROPHESY, GOD HAS INFORMED ME THAT HE HIMSELF WOULD RECEIVE AZAB AND GOD WOULD KILL HIM AND WILL PROTECT ME FROM HIS EVIL.SO THIS IS THE CASE WHICH IS NOW IN THE COURT OF ALLAH FOR DECISION.””” 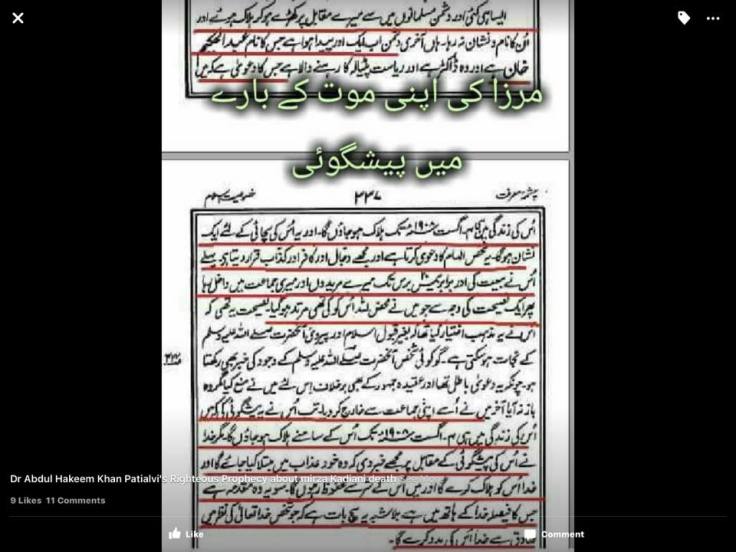