Intro
Mirza Ghulam Ahmad loved to curse his opponents. His favorite method of cursing was to call someone as a “sons of a prostitutes” (Zurrayatul Baghaya), or bitch or pig, or to call a man a woman or womanly. There are so many instances. MGA even called the wife of his first cousin as a prostitute, the Ahmadiyya editing team edited this out also, however, we have found it.  It seems that in 1897, MGA and his team called Sa’dullah as a son of prostitutes (ibn Bagha).  However, after Sa’dullah died in 1907, MGA refused to even mention that part of his poetry from 10 years earlier. Interestingly enough, Mirza Bashir Ahmad tells us that Muhammad Ali ( one of MGA’s lawyer’s and employees) told MGA not to mention how he had called Sa’dullah as the son of prostitutes, since Muhammad Ali feared legal recourse. This would be defamation, MGA had narrowly escaped a defamation case in 1904. Dard tells us it was Khwaja Kamaluddin and not Muhammad Ali however. However, by 1935, Mirza Bashir Ahmad said: The lawyer was Khwajah Kamal-ud-Din. In al-Hakam, volume 38, number 7, February 28, 1935, pages 3–4, narrating the eye-witness accounts of Maulavi Muhammad Ibrahim Baqapuri (see the 2009 online edition of Tadhkirah).

He called Saadullah ‘son of prostitution’ in an Arabic poem and translated it into Persian as it is in Arabic. Years later (1907), when Mirza was gloating over the death of Saadullah, he left out the vile epithet in the Urdu translation — not once, but twice:

If you do not die in humiliation, O son of Prostitution (ibn Bagha)”””””

Then, on page 446 of the Appendix of Haqeeqat-ul-Wahi (RK, vol. 22), there is no mention of the offensive phrase in the translation:

And again on page 450 of the same, there is a longer translation, but no mention of the abusive phrase that is there in Arabic.  Mirza mentions that the translations are his own.

The english edition of this book also has the entire line wherein MGA calls him the son of prostitutes as not mentioned (see pages , 554, 559 and 564).

(42) stated to me by shaikh Abdurehman misri that once Hazrat sb (MGAQ) kept sitting after zuhur prayer in masjid of qadiyan…an. Few days ago hazrat sb has written that Saadullah will remain without progeny. His son that is alive today , is impotent, will surely not be able to take his name ahead. This humble self says that saadullah was worst enemy of hazrat sb and used to talk bad against him. But before publishing this ” ishtihar” molvi Muhammad Ali advised hazrat sb that publishing such ishtihar would be against law . He said if Saadullah filed a suit in the court we would not be in a position to prove impotency of his son. Hazrat sb did not agree, when molvi Muhammad Ali insisted on his advise , hazrat sb,s face turned red he got infuriated and said “when a prophet gets himself armed and comes to battle field, he does not disarm him”. 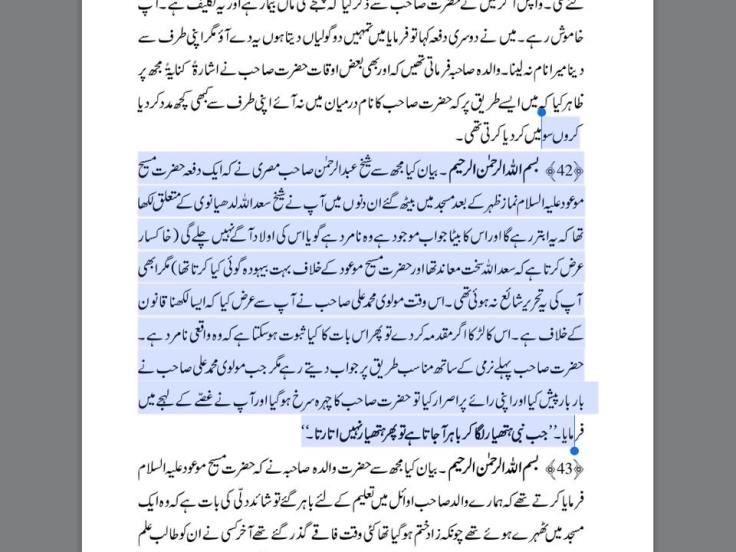