Who is Molvi Muhammad Abdullah Vakil? Died in 1946 as a Bahai

Intro
Molvi Muhammad Abdullah Vakil was a lawyer who lived in Kashmir and the Punjab from roughly 1880 to 1948. He seems to have been an Ahmadi from very early on (the 1890’s), his father was Muhammad Siddique Lone and he belonged to the Gatipora area of Shopian, Ahmadi’s claim that he was really from Rajouri, India. He appears to have been friends with Haji Umar Dar, who’s village was 10 miles from the Shopian area. However, he is not mentioned in the famous list of 313 Ahmadi’s in 1896. Per Khawaja Ghulam Abdul Ghaffar, he completed his Munshi Fazl degree in Qadian (year unknown). He became a teacher at the famous Talim ul Islam High School in Qadian and was even the teacher of MGA’s sons.

He appears in Ahmadiyya history in 1898 as he allegedly tells MGA that the tomb of Yuz Asaf actually belongs to Esa (as) (see page 17), 40+  years (in 1946) later he tells the world how MGA edited his letter and lied about the entire incident. In 1931, he started the famous “Reading Room” in Kashmir. He also worked closely with Shaikh Abdullah, the Lion of Kashmir in the Kashmir riots of 1931 which led to the Glancy commission report and forced the Prime Minister to resign. In the 1930’s and when he died, his family specifically had to clear up the issue of whether he was an Ahmadi or not. His son was Molvi Bashir. By the early 1940’s, he seems to have become a Lahori-Ahmadi. He died in 1948, as a member of the Bahai’s (see the Bahai World, online 1981 edition, see pages 515-516).

His wives?
Per Khawaja Abdul Ghaffar Kashmiri, he had 2 wives (at the 24:00 mark). They were the sister’s of Khwaja Abdur Rahman.

He wrote his own biography
Most of his biography online comes from his book, “Hamara Adab”. As well as Shaikh Abdullah’s book, “Aatish-e-Chinar”. His connections with Ahmadiyya are heavily mentioned in these 2 sources. See also, “Tareekh-Jung-e-Azadi-Kashmir” by Munshi Nazir ud Din.

1898
MGA and his team concocted many stories about Islam and the many religions of the world.  Their most embarrassing embellishment is the story of Yuz Asaf.  We have already connected a person by the name of Khalifa Noorudin Jamooni (not to be confused with Maulvi Noorudin), who was also involved in concocting this embarrassing story. John Rippon was correct when he called Ahmadi’s as academically dishonest. Max Muller also refuted Jesus in India. Pappas also called Mirza Ghulam Ahmad and his team as academically dishonest.  MGA and his team of writers publishes an edited letter from Maulvi Abdullah to MGA in terms of the Yuz Asaf grave. This letter was published in MGA’s 1898 book, “Raz i Haqiqat” in english as “A Hidden Truth”. 40+ years later he wrote about how MGA edited his letter and mis-represented him about this tomb.

1902–October
On October 29-30th, Syed Muhammad Sarwar Shah and Maulavi Abdullah Kashmiri were to represent the Ahmadis at a debate, and Maulavi Sanaullah the other party. The debate was held in the open under a banyan tree. There were only three Ahmadis at the debate and over 600 non-Ahmadis were present. Maulavi Sanaullah Amritsari told the villagers that the Ahmadis were afraid of debates.

1902–November 2nd
Molvi Abdullah and Sarwar Shah arrive at Qadian and give MGA the report of what happened with the debate with Sanaullah.

1902–November 15
MGA publishes his famous book, “Ijaz i Ahmadi“, which mentions Molvi Abdullah and Sarwar Shah‘s debate of October. MGA also publishes a reward announcement, which is silly and absurd.

1931
He started the famous “Reading Room” in Kashmir. He also worked closely with Shaikh Abdullah, the Lion of Kashmir in the Kashmir riots of 1931 which led to the Glancy commission report and forced the Prime Minister to resign. The martyrs of July 13, 1931 were taken to Jamia Masjid after the police opened fire and 22 people were killed and hundreds injured. The bodies of the martyrs were laid in the shrine compound of Khawaja Naqashband Sahab R.A Khawaja Bazar Srinagar where Sheikh Abdullah, Mirwaiz Maulvi Muhammad Yusuf Shah and other leaders started delivering speeches against Maharaja Hari Singh.  Molvi Abdullah was the lawyer for Shaikh Abdullah in court.

1945–Maulvi Abdullah wrote to the Ahmadi Khalifa exposing how his letter was edited
In response to MGA, Molvi Abdullah Kashmiri added a chapter Sholatunnar (Flame of Hellfire) in his Risal Mayar e Haq and catagorically denied to have reported this. He said in his letter of 1898 he never reported the grave to be of Essa a.s rather it was the MGAQ’s own fabrication. Mirza sb published his letter in his book Raaz e Haqiqat (1898). He said he does not know why his letter was amended. All he knows is that his letter did not contain what MGAQ has published.

Molvi Abdullah Kashmiri Says Mirza did not stop here but he sent letters to Egyptian Scholars containing this fabricated story of Yuz Asaf grave being the grave of Esa on the authority of my report and bearing witnesses of prominent Ulema of Kashmir including Mirwaiz Molvi Rasul all of whom were Sunni and believed Esa as to have been ascended to skies. This sent a wave of shock among Egyptian scholars like Allama Rasheed Raza of Egypt mentioned it in his book. But all it was a fraud by MGAQ.

On this denial by Molvi Muhammad Abdullah Kashmiri the Mirzai party objected as to why he remained silent for a long period of time. He says that he had become a blind in the love and affection of Masih e Maoud. The high status of Masih e Moud did not give him courage to say something on it.

However, on 25-10-1945 he wrote a letter to the Khalifa Mirza Basheer ud Din Mahmud Ahmad seeking clarification as to why Mirza sb amended his letter, he asked him to provide references vide his reply dated 14-11-1945. The requisite references were provided to him. However he did not respond to it ever. Molvi Abdullah Kashmiri says if the scholars of Kashmir like Mirwaiz confirm that this grave of Yuz asaf is the grave of Essa a.s, he would publish his apology and pay a fine of Rs 500/- to Mirzaiyya.

1948–April 12th
He dies.  He was buried in a Muslim cemetary in Barzulla, which is close to the famous Jamia Masjid. He was buried with all the religous rites of a member of the Bahai, he seems to have been a secret member of theirs for many years. In the 1981 edition of the Bahai’ world, he is mentioned on pages 515-516. 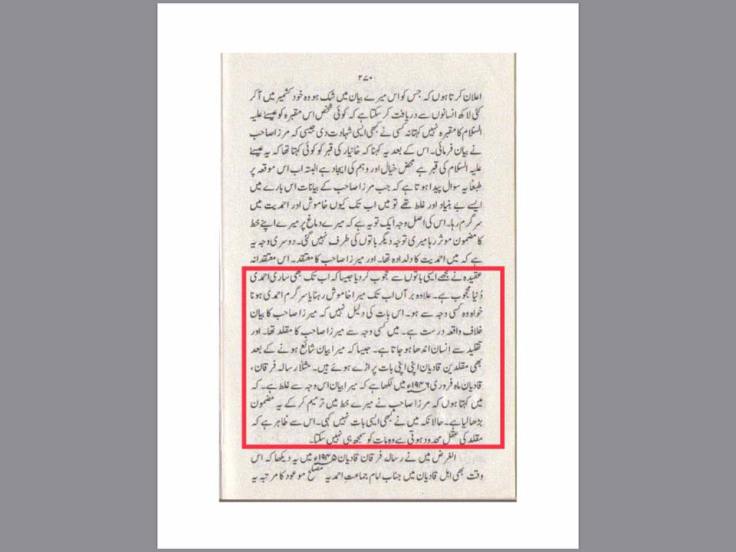 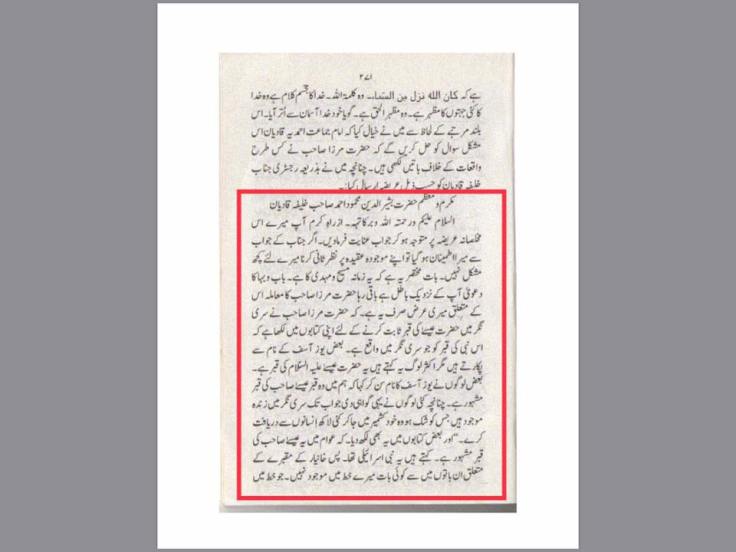 The work of Shams ud Din
Recently, an Ex-Ahmadi, Shams ud Din researched this topic and posted his results. Shams ud Din found the book “Rahul ul Hayat” by Allama Muhammad Bakir, there is an urdu translation called, “Ainul Hayat”. On page 361, it is written that Yuz Asaf had a father in Kashmir. This immediately cancelled Yuz Asaf becoming Esa (As), since Esa (as) historically never had a father. Yuz Asaf was the son of a King and was able to live a life of excess. MGA never mentioned any of this. Yuz Asaf’s dad was a drunkard, and even prayed to idols.

The tombmaster website, roughly 1992–2002
It is a strange coincidence that a few years back another very vocal proponent of Grave of Jesus in Kashmir, Mr. Abu Bakr – the Tombmaster, also embraced Bahaism when he lost faith in Mirza Ghulam Ahmad Qadiani. He created and operated a now defunct website called tombmaster. He was a Qadiani-Ahmadi and on this website, he supported the Ahmadi belief that Yus Asaf=esa.

5 thoughts on “Who is Molvi Muhammad Abdullah Vakil? Died in 1946 as a Bahai”