Intro
Safiya Begum was the daughter of Maulvi Abdul Qadir. When she was a child (Roughly 1905), under 10 years old, she was sent to Qadian to spend days and nights with MGA in his private quarters, giving him massages and etc. In fact, many many Ahmadis sent their wives and daughters to Qadian to service MGA. Maulvi Abdul Qadir Ludhianvi was mentioned in the famous list of 313 companions of MGA in 1896 (see Dard).

In 1922-1923, she was a teacher in the Nusrat Jehan girls high-school at Qadian (which was operated by Lajna Ima’illah) and gave an account of her services to Mirza Ghulam Ahmad (See Seeratul Mahdi). There is also the famous story of MGA pouring hot water on her arm as a punishment for warming up MGA’s toilet water too much (See in the below). MGA seems to have been really harsh with her. In this story she is called, Safiya Begum Sahiba Shahjahanpuri, which means she was from Shahjahanpuri, India. We have a companion of MGA named Shaikh Masihullah Shahjahanpuri, we are unsure of the connection. In 1923, in Seeratul Mahdi, Mirza Bashir Ahmad wrote that her husband was Shaikh Ghulam Ahmad (also spelled as Sheikh Ghulam Ahmad).

There are other stories of MGA having women taking baths in-front of him in Darul Zikr. We also know that Barkat Bibi told Mirza Ghulam Ahmad about pain in her vagina. We have presented many quotations in the below which prove that MGA always kept toilet attendants who also worked as masseuses. Mirza Ghulam Ahmad got massages from female doctor’s too.

Interestingly enough, Mahmud Ahmad was accused of the same crimes in 1906, he had some type of affair with the daughter of a male-attendant of MGA. Between 1927 and 1937, several members within the community began to allege that Mahmood Ahmad was involved in acts of sexual impropriety. To exonerate himself of these accusations, Mahmood Ahmad stated:

In 1935, the Khalifa, Mirza Basheer-ud-Din Mahmud Ahmad described his father as a bon-vivant. He was in court and dealing with a Hindu Judge, Justice Khosla (see page 122), this judge dealt with ahmadiyya fairly and called it fangled and disturbing, he made many other comments about sex drugs and etc. This had happened before, almost all the Hindu judges who saw a case involving MGA, they found him guilty, however, in all of these cases, MGA would win on appeal, either that or a British judge would exonerate MGA (see the story of abdul hameed being sent for murder). Even the Lahori-Ahmadi’s weighed in and condemned the behaviors of the Qadiani Khalifa.  Muhammad Ali commented on the matter here and seemed taken aback by the behaviors of his former colleagues (see page 3).

“”MGA said to Safia Begum, daughter of Maulvi Abdul Qadir to massage his head, and he told her, ‘one day you will feel proud that you have massaged the head of Maseeh Maud”” 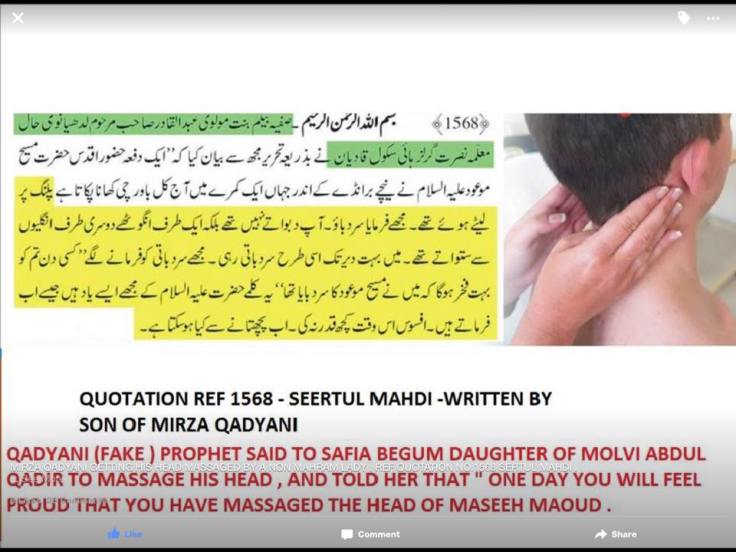 “Safiya Begum Sahiba Shahjahanpuri wife of Sheikh Ghulam Ahmad nau Muslim wise mujahid wrote by letter from the Lajna Imaillah Qadian that once Huzoor (as) said to me “Safiya! Put the hot water from the lota in the washroom!” I (accidentally) put a little bit hotter water. When Huzoor (as) came out he said to me, “put the backside of your hand forward!” and he started pouring the water and kept laughing. Then he said, “Does the water feel hot?” I said it does. He said, “water as hot as this should not be placed.”

Ahmadis would send their daughters to Qadian, to serve Mirza Ghulam Ahmad at night

In Qadian, Mirza Ghulam Ahmad was allowed to be intimately touched by all women and men

Mirza Ghulam Ahmad got massages from female doctor’s too

Mirza Ghulam Ahmad got massages from little girls too