Intro
Maulvi F. R. Hakeem (written as Hakim Fadl-ur-Rahman by Fisher, see page 108) first shows up in Ahmadiyya history as a missionary sent to West Africa (Nigeria)(Gold Coast) in 1922, in fact, Nayyar had asked for assistance from Qadian. Before Maulvi F. R. Hakeem, it was Nayyar who made in-roads in West Africa on behalf of the Qadiani-Ahmadi’s. In the ROR of Nov-1933, Maulvi F. R. Hakeem claims that he left Qadian on January 23rd, 1922 and arrived in Lagos, Nigeria in April of 1922. He returned to Qadian on Jan-27-1930.

By 1923, Al Hajj Fadl-ul-Rahman Hakim was mostly working out of Ghana as the first permanent missionary to Ghana. In 1923, Hakim started an elementary school in Saltpond. Further primary schools were opened in a number of other towns and villages, such as in Mumford and Potsin, all in the coastal regions. He stayed until 1929, at which point he was called back to Qadian.

He seems to have been relieved by another Ahmadi Mullah, Maulana Nazir Ahmad Ali, technically, he spent only the year of 1936 in Ghana and moved over to Sierra Leone, wherein he was the first ever permanent Ahmadi mullah on the scene (See Fisher). Fadl-ul-Rahman worked as the missionary in-charge of Ghana from 1935 to 1947.

He was there when the controversy with Imam Ajose happened (early 1930’s) and a split ensued and also when Jibril Martin seceded with his own group (early to mid 1930’s) of Ahmadi’s who were disloyal to the Khalifa, the matter even went to court and was decided on (see Fisher).

A man named Maulvi Muhammad Afzal Qureshi came to work in British-West-Africa (aka Nigeria) with Maulvi F.R. Hakeem left in 1946 (see Fisher). He was made a resident Missionary based in the North between 1946 and 1951 and he shuttled between Zaria and Kano during the period. He was the only white man riding on a bicycle with a galloping turban which always attracted the admiration of children who usually followed him for a long distance while he was on his way to the preaching venue. Another Ahmadi missionary showed up, Naseem Saifi, he would end up being in-charge until the 1970‘s. 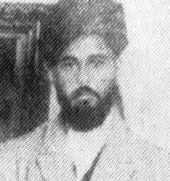 His fascinating method of preaching won the sympathy of the late Alhaji Muhammadu Aminu, who later became the Emir of Zaria and his successor, the late Iyan Gari as well as Alhaji Saidu Zango and a host of other Hausa speaking elites. The Hausa speaking elites held Maulvi Hakeem in high esteem.

Al Hajj Fadl-ul-Rahman Hakim was mostly working out of Ghana as the first permanent missionary to Ghana. In 1923, Hakim started an elementary school in Saltpond. Further primary schools were opened in a number of other towns and villages, such as in Mumford and Potsin, all in the coastal regions. He stayed until 1929, at which point he was called back to Qadian.

For the first decade, the Ahmadiyya mission had only a single missionary at any one time, supported by a Fante interpreter. During the 1920s, Hakim conducted open-air lectures across notable locations along the southern coast. In his efforts he adopted the Quran and the Bible. Many of these discussions revolved around the death of Jesus, a perspective at odds with the non-Ahmadi Muslim and Christian populations of Ghana. Titles included “The Bible Shows Jesus did not die on the cross” and “Jesus did not die on the cross, nor is he sitting alive in the fourth heaven at the right hand of God.” Such polemics, on the one hand, were a cause of confusion for the Christian peasants in the southern regions and on the other hand created a negative relationship between Hakim and some Christians. In some cases, polemics induced intra-religious violence directed towards Ahmadis.

Maulvi F. R. Hakeem has an essay in the ROR of May-1933 entitled, “Islam in West Africa”. In this essay, he talks about the educational system of Ghana (Gold Coast), Nigeria and Sierra Leone.

Per the ROR of July-1933, Mr. F. R. Hakeem has arrived in the Gold Coast (aka Ghana) and has relieved Nazir Ahmad. The ROR of Nov-1933 reports that 2 Ahmadi missionaries (Dard and F.R. Hakeem) stopped in Cairo and were greeted by Maulvi Abu᾽l-῾Ata Jalandhari and his small group of Ahmadi converts, Sheikh Mahmud Ahmad Irfani is mentioned by name.

The ROR of Dec-1933 reports the work of Maulvi F. R. Hakeem in the Gold Coast (Ghana). He alleges that he had opened a school in 1922 (in a village named Aboora, a few miles from Cape Coast) which had failed, he tried again, and not it is running and allegedly, 80 people are reading. He alleges that 30 people have converted to Ahmadiyya. Mr. Bin Yamin is also mentioned.

He (Maulvi F. R. Hakeem) is mentioned in the Jan-Feb edition of the ROR as working out of Saltpond (which is modern day Ghana). He explains how the people of Ghana are suffering through an economic downturn. The local population relies on cocoa farming. Maulvi F. R. Hakeem alleges that 151 people became Ahmadi.

In December of 1939, the problem of loyalty to the Khalifa at Qadian was so bad, Hakim Fadl-ur-Rahman was ordered by the Khalifa to force all Ahmadi’s to renew their bait (See Fisher). The majority of Ahmadi’s refused.

The ROR of Dec-1940 reports that Maulvi F. R. Hakeem is the missionary-in-charge for all of West Africa. They also report that a special tabligh day was held on July 14th, and the dissident groups of Ahmadi’s didn’t show up.

By 1946, there were up to three Indian missionaries and five West African missionaries, and four teachers in the country. Hakeem left and was replaces by Naseem Saifi.

Extract of the Judgment Reads:-
In the West African Court of Appeal holding at Lagos, Nigeria on Saturday, the 7th day of May 1949 before their honours.

Judgement
This is an appeal from a decision, giving in the Supreme Court of Nigeria at Ibadan, by Jibowu J. The appellants, who were the plaintiffs at first instance, failed in their claim for the Exclusive possession of certain premises, known as the Ahmadiyya Mosque at Ife. Their claim was founded upon the contentions that the Mosque is the property of a religious community, of which they are members, within he faith of Islam and that they are lawfully appointed trustees of the Mosque. In the year 1916 there came into existence in Nigeria a branch of a religious movement known as the Sadr-Anjuman-Ahmadiyya, which movement has its Headquarter at Qadian in India and owes spiritual allegiance to one Hazrat Mirza Bashirud-Din Mahmud Ahmad, known as His Holiness the Khalifatul Masih. The appellants and the respondents were members of this movement and of its branch in Nigeria.

In 1938 the Mosque was acquired by the movement unhappy difference into which it is not necessary to go arose within the Nigerian branch of the movement with the result that on the 29th of December 1939, the Khalifatul, through the first respondent as his agent in Nigeria, withdrew his recognition of certain members of the movement, among whom were the appellants. The appellants, however, continued to regard themselves bound by the tenants of the movement in all respects except one; they no longer regarded the Khalifatul as their religious leader.

It was argued both here and in the court below that the applicants, by superimposing a new constitution, had withdraw from the parent movement and the learned trial judge, in a long and careful judgment held that this was so. I see no reason to disturb his findings of fact, which are borne out by the terms of the 1943 constitution, in which it is worthy of note, the appellants ascribed a new name (that of Ahmadiyya movement-in-Islam) to the movement. The learned trial judge held that the appellants, by their own acts, seceded from the movement of which they were once members and that they were not entitled, by reason of their secession, to the property of the movement.

This, in my view was the correct decision; this appeal should be dismissed, with costs in favour of the respondents in the sum of £42:4:6d.
(Sgg) C.T. ABBOTT
Puisne Judge, Nigeria
I concur (Sgd) H.W.B. BLACKALL, PRESIDENT
I concur (sgd) HOHN VERITY
CHIEF, JUSTICE, Nigeria.
Certified True Copy
(Sgd) E.A. Bamgboye,
Acting Deputy Registrar,
West African Court of Appeal,
Paid 5/6d on CR. 157522/40/17.549

After the judgment the Jama’at started on a new platform at the present place No. 10 Iremo Road Ile-ife and the other side that seceded established their own mosque at Ilare Area of Ile-Ife under their new name Ahmadiyya movement in Islam. The other party retained Sadr-Anjuman Ahmadiyya.

Missionaries were always posted to Ife regularly including Central Missionaries. All the auxiliaries bodies of the Jamaat were fully established. These are, Lajna Imaillah, Khuddamul, Nasrat, Atfal and Majlis Ansarullah.

Who is Naseem Saifi?

The history of the #Ahmadiyya Movement in Nigeria

Who is the Ahmadi mullah, Abdur Rahim Nayyar?