Why do #Ahmadis use 17:93 of the Quran to disprove the physicality of the #Isra and #Miraaj?

“”(or you ascend up into the sky,) meaning, you climb up on a ladder while we are watching you.””

(Say: “Glorified be my Lord! Am I anything but a man, sent as a Messenger”) meaning, `Glorified, exalted and sanctified be He above the notion that anyone would come before Him concerning any matter pertaining to His authority and sovereignty. He is the One Who does what He wills. If He willed, he could have given you what you asked for, or if He willed, he could have refrained. I am only a Messenger to you, sent to convey the Messages of my Lord and advise you. I have done that, and the response to what you have asked is to be decided by Allah, may He be glorified.’

In this sitting, an ahmadi told MGA that Muslims present the case of Miraaj, as they argue with us on the physicality of the RAFFA of Esa (as) and the physicality of his return. In this, MGA claims that people who believe in this as a physical concept, they are very nasty people, MGA claims that any body that needs to shit and piss could never go to heaven (at the 6:48 mark). We have posted the scan in the below.

The exact quote
….”The Miraaj that took place with the entity (vujud) that peed and shit, it was a pleasant and luminous entity.””” 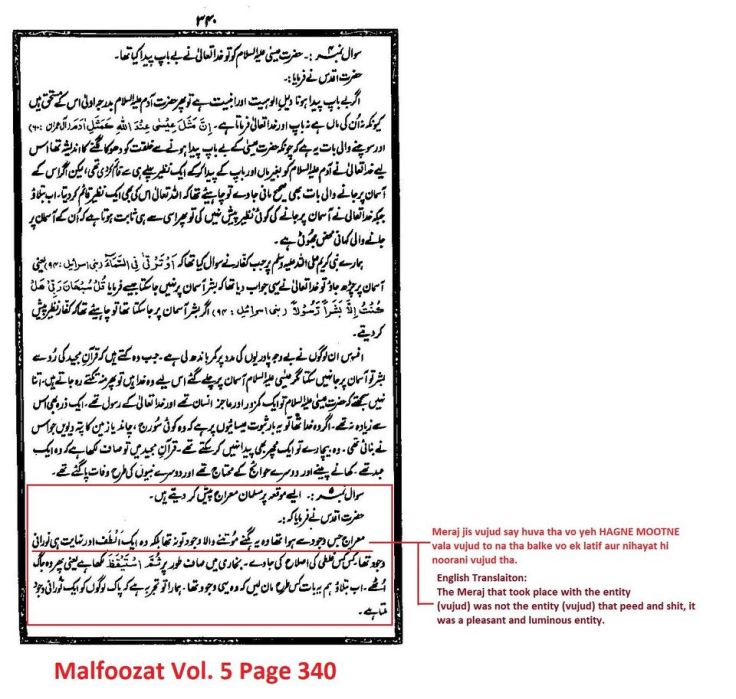 MGA and his team of writers never quote from Ibn Hisham or Ibn Ishaq (see page 183), however, in this case they did. The quote is posted in the below:

“The Prophet’s body did not leave the ground; he made a spiritual journey;” Muawiye’s saying,

“The night journey was a true dream from Allah;” 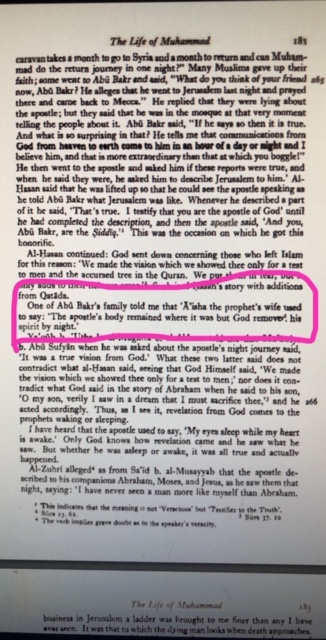 From various hadiths we learn much greater detail. The Israʾ is the part of the journey of Muhammad from Mecca to Jerusalem. It began when Muhammad was in the Great Mosque, and the Archangel Jibrīl (or Jibrāʾīl, Gabriel) came to him, and brought Buraq, the traditional heavenly mount of the prophets. Buraq carried Muhammad to al-Aqsa Mosque, the “Farthest Mosque”, in Jerusalem. Muhammad alighted, tethered Buraq to the Temple Mount and performed prayer, where on God’s command he was tested by Gabriel.[5][6] It was told by Anas ibn Malik that Muhammad said: “Jibra’il brought me a vessel of wine, a vessel of water and a vessel of milk, and I chose the milk. Jibra’il said: ‘You have chosen the Fitrah (natural instinct).'” In the second part of the journey, the Miʿraj (an Arabic word that literally means “ladder”),[7] Jibra’il took him to the heavens, where he toured the seven stages of heaven, and spoke with the earlier prophets such as Abraham (ʾIbrāhīm), Moses (Musa), John the Baptist (Yaḥyā ibn Zakarīyā), and Jesus (Isa). Muhammad was then taken to Sidrat al-Muntaha – a holy tree in the seventh heaven that Gabriel was not allowed to pass. According to Islamic tradition, God instructed Muhammad that Muslims must pray fifty times per day; however, Moses told Muhammad that it was very difficult for the people and urged Muhammad to ask for a reduction, until finally it was reduced to five times per day.[3][8][9][10][11]

-An excerpt from a translation of Sahih al-Bukhari describes Buraq:

Then a white animal which was smaller than a mule and bigger than a donkey was brought to me … The animal’s step (was so wide that it) reached the farthest point within the reach of the animal’s sight.

Ibn ʿAbbas’ Primitive Version narrates all that Muhammad encounters throughout his journey through heaven. This includes seeing other angels, and seas of light, darkness, and fire. With Gabriel as his companion, Muhammad meets four key angels as he travels through the heavens. These angels are the Rooster angel (whose call influences all earthly roosters), Half-Fire Half-Snow angel (who provides an example of God’s power to bring fire and ice in harmony), the Angel of Death (who describes the process of death and the sorting of souls), and the Guardian of Hellfire (who shows Muhammad what hell looks like). These four angels are met in the beginning of Ibn ʿAbbas’ narrative. They are mentioned in other accounts of Muhammad’s ascension, but they are not talked about with as much detail as Ibn ʿAbbas provides. As the narrative continues, Ibn Abbas focuses mostly on the angels that Muhammad meets rather than the prophets. There are rows of angels that Muhammad encounters throughout heaven, and he even meets certain deeply devoted angels called cherubim. These angels instill fear in Muhammad, but he later sees them as God’s creation, and therefore not harmful. Other important details that Ibn ‘Abbas adds to the narrative are the Heavenly Host Debate, the Final Verses of the Cow Chapter, and the Favor of the Prophets.[14] These important topics help to outline the greater detail that Ibn ‘Abbas uses in his Primitive Version.

In an attempt to reestablish Ibn ‘Abbas as authentic, it seems as though a translator added the descent of Muhammad and the meeting with the prophets. The narrative only briefly states the encounters with the prophets, and does so in a way that is in chronological order rather than the normal order usually seen in ascension narratives. Ibn ʿAbbas may have left out the meeting of the prophets and the encounter with Moses that led to the reduction of daily prayers because those events were already written elsewhere. Whether he included that in his original narrative or if it was added by a later translator is unknown, but often a point of contention when discussing Ibn ‘Abbas’s Primitive Version.[14]

2 thoughts on “Why do #Ahmadis use 17:93 of the Quran to disprove the physicality of the #Isra and #Miraaj?”