Who is Dr. Syed Muhammad Hussain?

It has been stated by Mufti Sadiq that there was a famous Medical Doctor in Lahore by the name of Dr. Muhammad Hussain. Hazrat Massih e Moud (Mirza Qadiani) used to have medical consultation from him. Once he said smilingly to hazrat sb, plz teach me the way how do you get ilham. Hazrat sahib replied Dr. Sahib you teach me the DOCTORI (Medicines). Dr. Sahib said it requires too much time and hard work to learn medicine. Hazrat Sahib (Mirza Qadiani) said same is the case with Ilham. 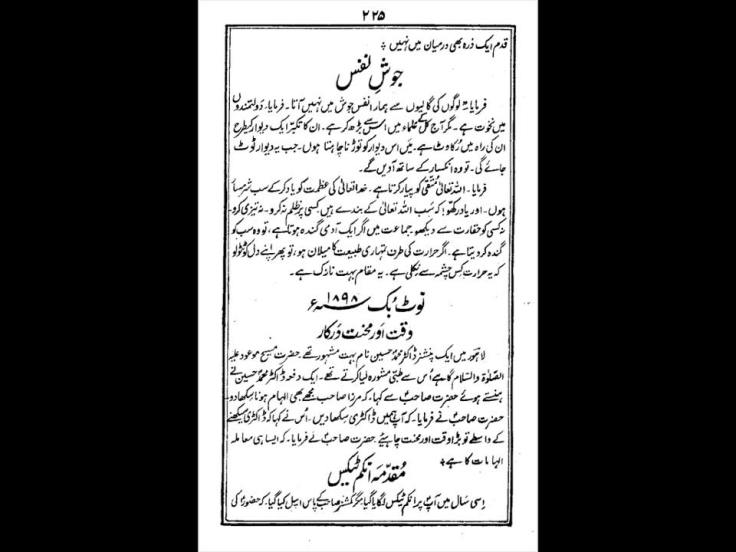 In 1901-02, when Dr Syed Muhammad Husain Shah was posted in Gurdaspur on special duty for the treatment of plague patients, Syed Amir Shah, a cousin of his, who was an Assistant Tehsildar and already an Ahmadi, took him to Qadian to see the Promised Messiah. The Shah sahib, as Dr Syed Muhammad Husain Shah was commonly known amongst his colleagues, friends and family members, narrates the events of his taking bai‘at at the hands of the Promised Messiah in these words:

“Before my visit to Qadian for the first time I was thinking of it as a gaddi (spiritual court), like the gaddies of other pirs, but when I arrived there I had a problem in recognizing Hazrat Sahib as he was sitting amidst other people, so I had to enquire as to who amongst them was the Promised Messiah. This unassuming behaviour of the Promised Messiah registered a deep impression on my mind. A person amongst the gathering asked the Promised Messiah to request his followers to grow beards as most of his followers were clean-shaven. In reply, Hazrat Mirza sahib said that he was more concerned about the hearts of the people, and once those are reformed the beards will automatically follow. After returning from Qadian, I kept thinking that such a person cannot be an imposter and I decided that I should join his Jama‘at (community of followers). So I again went to Qadian and took bai‘at (pledge of allegiance) at the hands of the Promised Messiah.”

Some time later after that the Shah sahib was permanently posted at Lahore. In those days, he, along with Khwaja Kamal-ud-Din, Dr Mirza Yaqub Beg and Shaikh Rahmatullah, used to go to Qadian every weekend to spend time in the company of the Promised Messiah.

MGA died abruptly and suddenly on the evening of May 25th, Ahmadi’s lie and claim that he died the following morning at 10am. Nevertheless, MGA died on the property of Dr. Syed Muhammad Hussain on Brandereth Road, Lahore, British India, Islamia College, which was opposite to Ahmadiyya Buildings, across Brandreth Road (at the future location of Ahmadiyya buildings). MGA left Qadian for Lahore on 27th April 1908 and arrived in Lahore on the 29th. Initially, he was staying at the house of Khwaja Kamaluddin (also on the property of Dr. Hussain), however, after just a few days, MGA moved to a different house of Dr. Syed Muhammad Hussain, this happened most likely because the women didn’t get along with each other. For holding congregational prayers, the arrangement at that time was that these were held at the open space on which the present Lahori Ahmadiyya Mosque is now situated. A marquee was installed there and thick cotton carpets with white sheets over them were spread on the ground. At the same open ground in the centre of the Ahmadiyya Buildings, where now stands the Ahmadiyya Mosque, Hazrat Maulana Nur-ud-Din used to deliver Dars-i Quran every evening. As was his practice, he would start his exposition right from the beginning of the Quran and continue it till its end. Ever since the MGA came to Lahore, the Muslim’s of Lahore had set up their camp in the lawns of Islamia College, which was opposite to Ahmadiyya Buildings, across Brandreth Road. It being summer time, MGA used to go out in a horse-drawn carriage for outing in the evening with his wife. However, after touring the city of Lahore in the evening, as soon as MGA got home, his final illness began. He died a few short hours later. You can read his death story from Ahmadi sources here.

After MGA died
In 1908 (after MGA died), at considerable cost, Dr Syed Muhammad Husain Shah completed the expansion of Masjid-i Nur. He also purchased a plot of land on which he built a house in Qadian, which he later gave to the Promised Messiah’s family as a gift.

In 1910, he purchased land in the Ahmadiyya Buildings compound, Lahore and got the Mosque built on it. Further, he paid the cost of building a gallery attached to the Mosque for the ladies on land which was donated by Khwaja Kamal-ud-Din.

In 1914, the AAII Lahore was founded and the Shah sahib was made its Financial Secretary. There were not many members at that stage and it meant starting from scratch. Expenses for all the projects of the Anjuman at that time were mostly borne through the financial sacrifices of the Shah sahib, Dr Mirza Yaqub Beg and Shaikh Rahmatullah.

Muslim Town was founded in 1915 by Dr. Syed Muhammad Hussain (1878-1939), son of Syed Alim Shah. He was a graduate of Lahore Medical School) and the Chief Chemical Examiner of Punjab as well as a renowned physician and philanthropist. During the early 20th century, Model Town was an exclusive Hindu locality of Lahore. Muslims could not buy property in that neighbourhood and in response to this prejudice, Hussain bought plots of agricultural land along the Lahore Canal. He then hired professionals to plan a residential neighbourhood, that was initially named Islamabad. However, on the suggestion of his friend Allama Muhammad Iqbal, Dr. Hussain decided to rename the locality as “Muslim Town”, to emphasize its Muslim character in response to the exclusivity of Model Town as a non Muslim locality.

Dr. Hussain, initially built a house for himself on 40 kanals of this land at #7 Muslim Town and donated plots of varied sizes ranging from 10 marlas to 12 kanals to his numerous relatives, friends, family retainers and household help. Some of his famous friends and early settlers included the renowned artist Ustad Allah Baksh, Abdul Majeed Salik (writer), Maulana Ghulam Rasool Mehr, Maulana Muhammad Ali (translator of the Quran), the Faruqi family and the renowned Faqir family. Dr Muhammad Hussain constructed a mosque in Muslim Town (Aisha Masjid), in memory of his late mother. He also allocated land for a graveyard for his descendants in Shah Jamal and another graveyard in Muslim Town for the benefit of general public. The Shah Jamal graveyard is under the exclusive custodianship of his great grand daughter. Dr. Muhammad Hussain’s agricultural land around surrounding Muslim Town was later acquired by the Lahore Development Authority as part of Shah Jamal, Gulberg and New Muslim Town schemes.

The Shah sahib had been suffering from high blood pressure for some years. On 26 April, 1939, during Tahajjud prayers when the Shah sahib was in the state of prostration, he became unconscious. When he did not rise from prostration after a long time, his wife checked on him, and finding him unconscious, sent for Dr Basharat Ahmad who was living in Muslim Town. He tried his best but the Shah sahib did not regain consciousness and ultimately at quarter past eight on the same evening he breathed his last. Inna li-llahi wa inna ilai-hi raji’on (“We belong to Allah and to Him do we return.”)

The next day a very large number of people, both Ahmadis and non-Ahmadis, joined in his funeral prayer, which was led by Maulana Muhammad Ali.

2 thoughts on “Who is Dr. Syed Muhammad Hussain?”