Intro
Qazi Muhammad Zahuruddin Akmal was a pawn of Mirza Basheer-ud Din Mahmud before and after his Khilafat, he was never a Qazi (Judge), this was a name that was given to him out of respect.  He was born on March 25, 1881 in Goleki, Pakistan, he was the son of an Maulana Imam ud Din (it is unclear whether he was an Ahmadi or not.  He went to a mission-school in Gujrat, Pakistan for his schooling starting in 1895, by 1897, he matriculated, he then traveled to Qadian and signed the bait form.  He grew up to be a hard-core Qadiani-Ahmadi and was willing to do anything to please the Mirza family.  He was a sickly-man.  He barely matriculated, he never went to college, he was sick all the time!!  In 1906, he moved to Qadian and became an assistant editor of the Al-Badr, he wrote a few books while at Qadian, “Tasdiq ul Maseeh”, “Zahoor Ul Maseeh”, “Zahoor Ul Mahdi”, “Miyar ul Sadiqeen”, “Shahadutal Furqan” and many others.  Shortly thereafter, per Ahmadiyya sources, he was transferred to the editorship of Mirza Basheer ud Din Mahmud Ahmad’s magazine, the Tashhidhul Adhhan.  As soon as the Al-Fazl started, he was then transferred to the editorship of the Al-Fazl.  In fact, Mirza Basheer ud Din Mahmud Ahmad could not have launched this magazine without Qazi Muhammad Zahuruddin Akmal.  He went on to be an editor for the Urdu edition of the Review of Religions.  In 1926, he was the main editor of the Misbah (Ahmadiyya women’s magazine), which lasted 11 years til 1937.  In 1937, Qazi Muhammad Zahuruddin Akmal became the editor of all Ahmadiyya magazines, as management of magazines was centralized.  He seems to have retired in 1948.

1895 to 1906
It seems that he matriculated and then wrote many essays in support of Ahmadiyya in various newspapers of British India.  He wrote many novels also, he seems to have been a novelist.  Ahmadiyya sources tell us that whatever people wanted him to write about, he would do it.  By 1904, he had written 4 novels in total,

–He is hired as an editor of the Al-Badr by Mufti Muhammad Sadiq (who had just became the editor).  He is paid 15 rupees per month and moves to Qadian.  He was offered the same deal by the editor of the Al-Hakam, Shaikh Yacub Ali Irfani, however, he turned it down, citing a conflict of interest.

–He then writes some poetry wherein he calls MGA as greater than Muhammad (saw)(Naozobillah), it gets published in the Ahmadiyya newspaper Al-Badr (See the 1974 NA proceedings page 785 (pdf page 410) and the Al-Badr of Oct. 25th, 1906.  The poem is as follows:

English:
“Muhammad has appeared among us again,
He is in greater glory than before.” 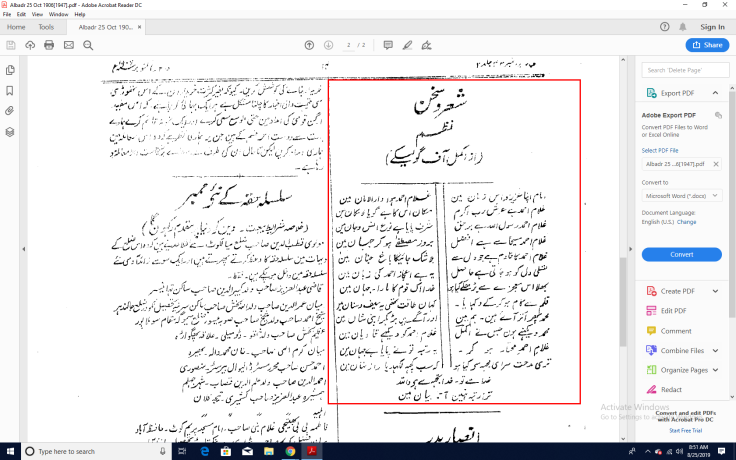 This poem was quoted in the Al-Fazl many years later
This poem was originally recited in presence of MGA in 1906 and MGA was very happy to hear it and praised with words ‘Jazak-Allah’. Further Al-fazal wrote that this poem written in calligraphic handwriting was presented to HMGA and he took it with him to his home to show it to his family. In AlFazal article a case was built that (elders of LAM including) Maulana Muhammad Ali, Khawaj Kamal ud Din, Shaikh Rehmatullah, Mirza Yaqub Baig, Syed Muhammad Hussain…..held the same opinion, and it was translated from Persian (original language of poem) into Urdu. And that Maulana Muhammad Ali was present in gathering when poem was recited to HMGA.

“Mahmud, the brightest star and crown jewel of prophethood – may God the Benevolent protect him – stood up to deliver an address on the topic of shirk [associating partners with God]. I paid particular attention to his speech. How am I to express it in words? It was an ocean of eloquence, flowing with great force. Undoubtedly, to have such sound thoughts at such a young age is no less than a miracle. In my opinion, this also is a sign of the Promised Messiah’sas truthfulness. This makes evident the grand status and beauty of the moral training he received under the guidance of the Promised Messiahas. (He spoke on matters of spiritual excellences in an extraordinary manner.” (Al Hakam, 10 January 1907) (Swaneh Fazle Umar, Vol 1, pp. 121-122)(see here–http://www.alhakam.org/musleh-e-maud-the-prophecy-and-its-fulfillment/).

1914
March-April time-frame
Qazi Muhammad Zahur-ud-Din published an article in the Tashhidhul Adhhan wherein the Khalifa asserted that MGA was mentioned in the Quran in the famous Chapter 61:6 (Ismuhu Ahmad verse, his name being Ahmad in english)(See “Truth About the Split”, 2007 online english edition).

1915-1916
Mr. Akmal seems to have been a private secretary of the Khalifa, Mirza Basheer ud Din Mahmud Ahmad and corresponded on his behalf with the famous Muhammad Ahsan Amrohi.  Amrohi seemed to be confused about the new beliefs of the Khalifa, he was also very old at this time and most likely vacillating (See “Two sections of the Ahmadiyya Movement” by Muhammad Ali, 1918).  By December of 1916, Muhammad Ahsan Amrohi had totally denounced the Khalifa at Qadian and it is unclear whether he became a Lahori-Ahmadi or a Sunni/Shia.

1924
He seems to have also been an editor of the Review of Religions, it is unclear which version, Urdu or English, it was most likely Urdu (See Hidden Treasures).

1947
He moved to Lahore from Qadian, with the Ahmadiyya entourage.

1956
After living in Lahore for almost 10 years, he finally moved to Rabwah.

1967
He died and is buried at Rabwah in Bahishti Maqbara, his funeral prayers were led by the 3rd Khalifa.

Musleh-e-Maud: The Prophecy and its Fulfillment