MGA calls all Muslims as Mushriks, aka Kafirs (1907)

Intro
MGA did Takfeer on the Muslims of the world many times, this is the second instance. And remember, MGA’s definition of hell is different, so he calls everyone as Kafirs and Mushriks, however, they can still make it to MGA’s heaven. We have created a full timeline of Mirza Ghulam Ahmad and Takfir herein.

“…It is rude to say that Jesus didn’t die, it is indeed shirk al-akbar [major polytheism].”

“””Hence, the correct translation of the above-mentioned verse I quoted is, ‘Every person from among the People of the Book will, before his death, believe in the Holy Prophet, may peace and blessings of Allah be upon him, or in Hadrat ‘Isa.’ The word مَوِْتهٖ [his death] refers to the People of the Book, and not Hadrat ‘Isa. This is why in another reading of this verse the words are مَوِْتهِمْ [‘their death’]. Why would مَوِْتهِمْ [‘their death’] be present in the other reading if it referred to Hadrat ‘Isa? See Tafsir Thana’i, for it strongly confirms my statement. It also says that Abu Hurairah, may Allah be pleased with him, gives the same interpretation, though the author qualifies that Abu Hurairah was deficient in his comprehension of the Holy Quran and many muhaddithin [scholars of hadith] have criticized the soundness of his understanding.
Abu Hurairah had the aptitude to quote, but he was quite deficient in understanding and discernment. I contend that even if Abu Hurairah, may Allah be pleased with him, has interpreted it in this way, it has been a mistake on his part, as it has been proven by muhaddithin that in many instances Abu Hurairah ra is mistaken and stumbles in matters that pertain to understanding and discernment. It is an established norm that the opinion of just one Companion cannot be regarded as a valid argument per the law of the Shariah. The valid argument per the law of the Shariah is only the ijma‘ of the Companions ra, and I have already explained, that consensus of the Companions ra occurred concerning the point that all Prophets had died. 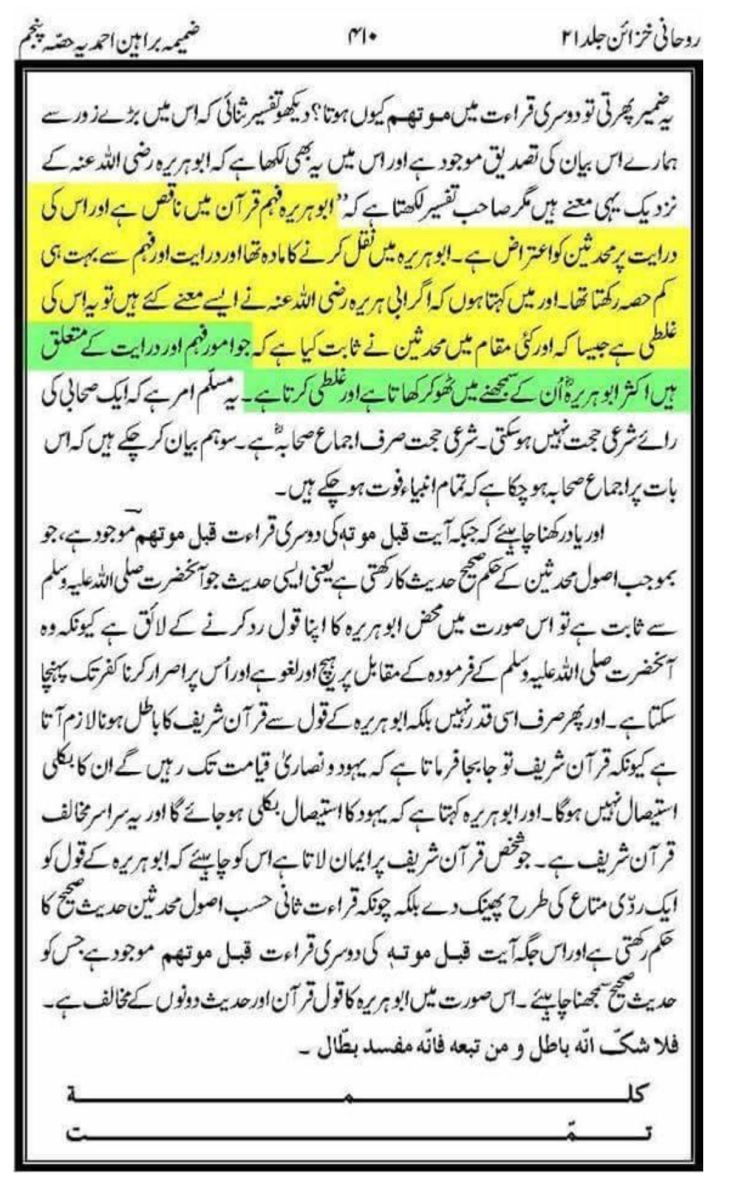 Ahmadis editing their books on Piggot