Intro
We all know that Noorudin was the main ghost-writer for MGA.  We also know that Noorudin was friends with Sir Syed and learned his islamic theories directly from Sir Syed.  Noorudin was out of a job in the early 1890’s and seems to have pressured MGA to make many claims.  This narration by Mirza Bashir Ahmad isn’t dated.  We needed to know when this happened?  Was it before Nov-1901??  Or after?  Obviously, Noorudin didn’t care what MGA claimed, in-fact, Noorudin had stable employment with MGA and lived in the same house as him.  In this quote, Noorudin admits that even if MGA claimed to be a law-bearing prophet and cancelled the Quran, he would still believe in MGA.  This is the height of arrogance in Ahmadis.  IMHO, MGA would have claimed prophethood has he lived til 1911, MGA and his team would have giving the same alibi as before, that MGA misunderstood what his God was telling him.

In 1911, there was an Ahmadi who opened declared that MGA was a law-bearing prophet.  His name was Zaheer-uddin, he is mentioned heavily by Muhammad Ali and Mahmud Ahmad in their discussions on the prophethood of MGA.  Nonetheless, Nooruddin didn’t expel Zaheeruddin til a few years later when he began claiming to be the rightly Khalifa.

The quote
“….This is just a matter of nabuwwat. My imaan/belief is that if hazrat maseeh mowwod claimed to be a law-bearing- prophet, and abrogated qur’aani-law, even then i will not object, because i have found him to be truthful and munjabullah. So whatever he states, that will be the truth, and i/we will believe that ‘khatamalnabiyeen’ has different meaning….” 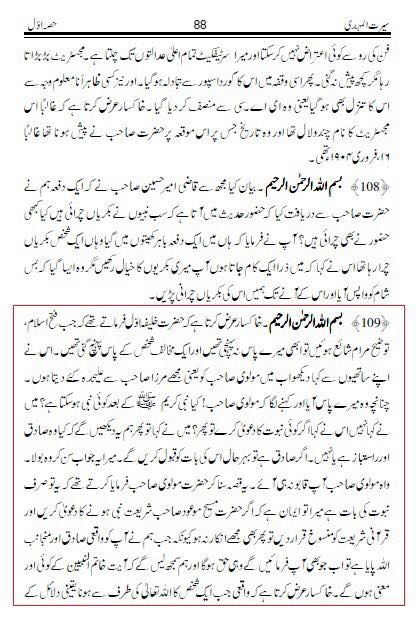