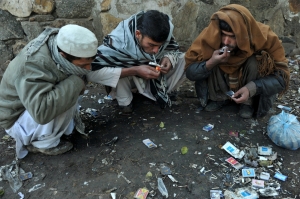 “There is taneen (tinnitus maybe?) in my ears, if it suitable to take tablets (he is referring to a particular tablet) please send them to me.  I feel ashamed to trouble you again and again, if it is ok please write me the composition/ingredients so I can make it myself.”

There is a footnote here by Sadiq
“Once due to stomach/digestion problem, I suffered from fever repeatedly, Hazrat sahib used to buy fresh ingredients to make a tablet made it with his own blessed hands and send it to me.  Allah gave me the cure/shiffa with it, I did not know its ingredients at the time, but Hazrat Sahib told me later.”

“In 1904, I was head master at Talim ul Islam high school of Qadian.  During those days, I would accompany Hazrat Aqdas (aka MGA) during the court case of Karam Din, at Gurdaspur, and suffered from light fever all the time, after the court case was over, episodes of fever increased, due to that I was staying at home most of the time and could not concentrate on the teaching work. I was under the treatment of Molvi Nooruddin, when I had no benefit from his treatment, Hazrat Masih Maud started to give me his medicines and I was benefitted by a certain tablet, Hazrat Masih Maood prepared it with hands daily and send it to me.  I asked repeatedly about the ingredients, so that I am able to make it myself, without troubling him but he (MGA) would not tell me.  He used to tell me that he can make it and send it to me.  The reason for my insisting was that I did not want to trouble him for making it.  His precious time is not spent on making the tablet rather it could be spent on important religious work.  Out of kindness of his heart, Hazoor always made the tablet and then sent it to me.  Later on, I found out the composition of that tablet, it was Afyun (bhung) dhatora quinine, and Kaphoor, also more ingredients of the same nature.  That tablet is famous by the name of Hib-a-Jadid” and is sold in all medicine sellers of Qadian.”

Mufti Muhammad Sadiq was a student of Noorudin, pre-1891

What is the Talim-ul-Islam-High School (college) at Qadian and later at Rabwah?

What was the occupation of the Promised Messiah? by Mufti Muhammad Sadiq (1912)

In 1891, when MGA made his big claims, he denied prophethood–Mufti Sadiq was heavily involved