Intro
In MGA’s first two books of 1891, “Victory of Islam” and “Elucidation of Objectives” and Izala Auham he never mentioned anything about any Mahdi coming.  Further, from 1876 to early-1891, MGA and his team of writers never mentioned the Mahdi at all. MGA seems to have been silent on this topic. However, as we all know, MGA affiliated with the “Ahl-e-Hadith”, in english, “the people of hadith” aka the Wahabbis of India. Further, in 1884, when MGA got married to Nusrat Jehan, and a famous Ahle-Hadith cleric read the Nikkah. Moreover, new research from Afzal Upal proves that MGA was very fond of the Ahl-e-hadith camp and seems to have been working with them. However, behind the scenes, MGA was slowly adopting the beliefs of Sir Syed, who also denied all hadith on the Mahdi back in the 1870’s.

” ….as Ibn Majah and Hakim have also written in their sahee hadess (arabic)( LAAA MAHDI ILLA EISA ) that is No mahdi will come , except only jesus is going to come . I agree that many Mahdis have come before , and possiblity is that in future they can come too and possibility is their that by the name of imam mohammad mahdi will come , the way people think have no prove .Thus it is not my suggestion only but also most of jurists show like that . (page 379 ) (Translation )Above lines from 1,2,3,4,5,6

The news reports of the eclipses in 1894 changed MGA and his teams mind
From the summer of 1891 to the early part of 1894, MGA denied all the hadith on the Mahdi, in total.  He wrote this specifically, however, his team read the news reports of impending eclipses and promptly found a hadith from Dar-e-Qutni which seems to have matched up.  However, they were wrong, the hadith from Dar-e-Qutni (which isnt authentic, nor does it trace back to Muhammad (saw), says that this type of eclipses has never happened before in the history of the world.  Ahmadiyya ghost-writers seem to have initially agreed, however, later on, they found out that it happens every 22 years and quickly wrote an amendment to their argument, i.e. that this eclipses had never happened before.

From 1894 to  MGA and his team wrote that these types of eclipses had never happened ever before or would ever happen after, see Noorul Haq, Part-2, which corresponds to RK-9.

“This has never happened and absolutely never happened, except in my time, since the beginning of universe till now, that lunar and solar eclipse had gathered in the month of Ramadhan in such a manner that some claimant of messengership or prophethood or muhaddathiyat (one who converse with God) had also been present.”  (Roohani Khazain, Noorul Haq, Part-2, Vol. 9, P. 50).

“One Hadith of Dar-e-Qatni also proves that the Promised Mahdi will appear at the head of 14th Century; and that hadith is this ….translation of the whole hadith is:

‘There are two signs of our Mahdi; since the creation of earth and heaven this sign has not been revealed for any appointed and prophet and messenger; and those signs are that moon will eclipse in the first night of its fixed nights of eclipse and sun will get eclipsed in the middle of the fixed days for its eclipse, during the month of Ramadhan.’

1908
After MGA died, BA5 is published and states that all hadith on the Mahdi are inauthentic. 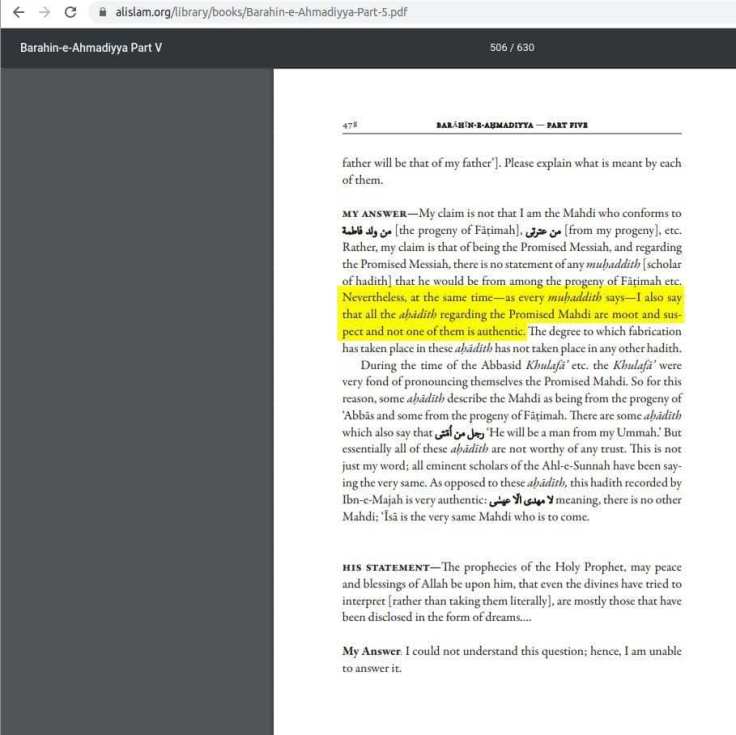